Her Majesty’s Canadian Ship (HMCS) Algonquin and HMCS Protecteur are expected to return to Esquimalt harbour at 4:00 p.m. Saturday following a collision with one another yesterday at approximately 11 a.m. PST while conducting exercise maneuvers en route to Hawaii. There were no reported injuries.

“The Royal Canadian Navy will be conducting an investigation into this unfortunate incident in order to determine exactly what happened,” said Commodore Bob Auchterlonie, Commander of Canadian Fleet Pacific.

The two warships were conducting towing exercises, which require close-quarters maneuvering, when the incident occurred.

HMCS Algonquin sustained significant damage to her hangar on her port side while HMCS Protecteur sustained damage of a lesser degree to her bow. While the full impact on the ships’ future sailing schedules has yet to be determined, HMCS Algonquin will no longer deploy to Asia Pacific region as planned.

A Board of Inquiry will be convened to further investigate the incident and circumstances surrounding it, and will make recommendations as to how to prevent a similar event from occurring in the future. More information about the incident itself will be released when available. 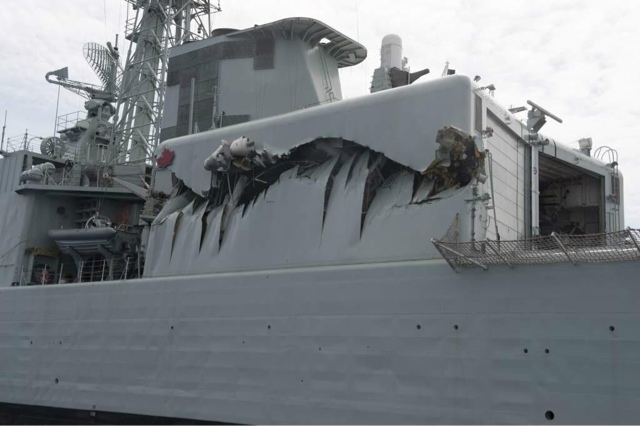 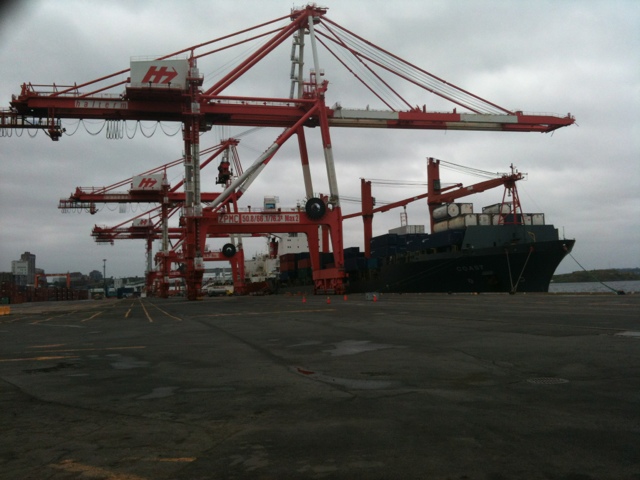 The (Small) Container vessel Coast spent the day at pier 42 for Melfi. Equipment to Move the old crane form 42 to 36 was being transfered, though the Zhen Hua 19 remained at pier 41.

the 2 new cranes can be seen in the background.

The Canada Border Services Agency (CBSA) and the Royal Canadian Mounted Police (RCMP) announced today that a seizure of over 50 kg of cocaine at the Port of Halifax, and destined for Ontario, has resulted in two arrests.

The narcotics were turned over to the National Ports Enforcement Team (NPET) which is comprised of the CBSA, RCMP and Halifax Regional Police for further investigation.On August 25, 2013, members of the RCMP conducted an operation in the Vaughan area of the Greater Toronto Area (GTA) which resulted in two arrests. Three search warrants were also executed as part of this ongoing investigation. 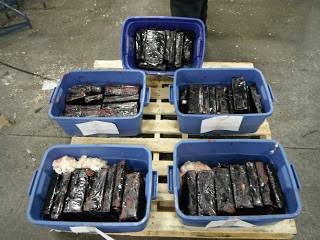 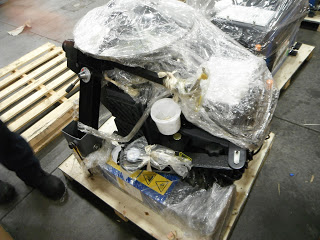 Warning, the video above is 20 minutes long,has horrible audio and the crane crawls off the ship Standby for a speed up version to follow. 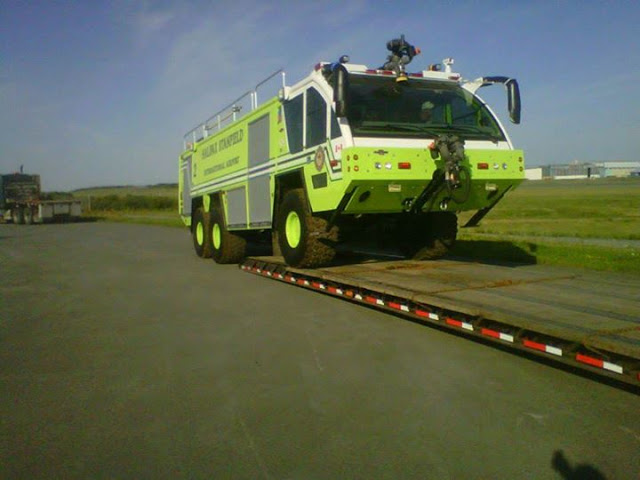 The first of two new Rosenbauer Panther 3000 fire trucks was delivered to YHZ On Aug 16th. Rosenbauer is a us Firm that makes all sorts of fire apparatus, but has a line of specialty airport equipment which is in use all over north America.

Rosenbauer provided these photos (below) on their webpage.

Hopefully the equipment stays shiny and new, and only gets pulled out for Photo Ops. 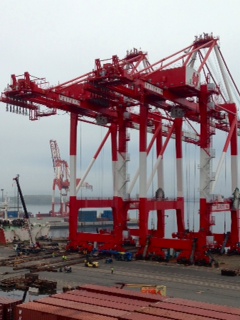 Small Photo at left was sent to me from a good reliable  source.  It offers a better angle then I could get.

Rollback on the first crane is supposed to start at 11am today. 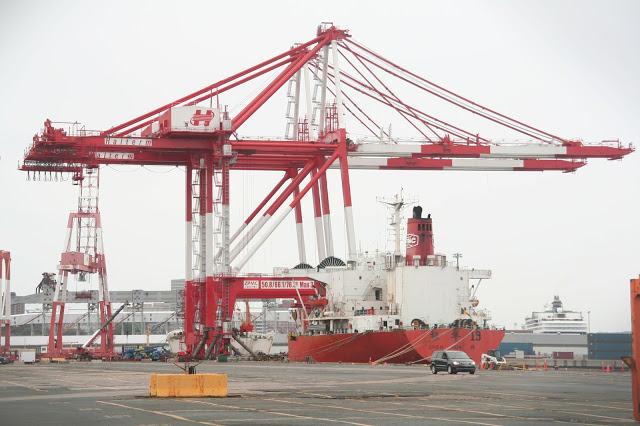 Work progressing on the offload of the first  crane. Rails are down, and shoring has been removed. 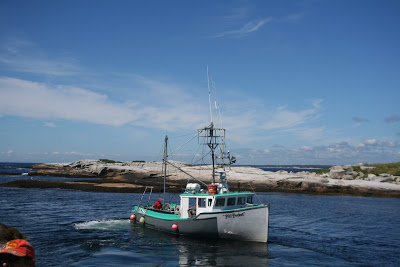 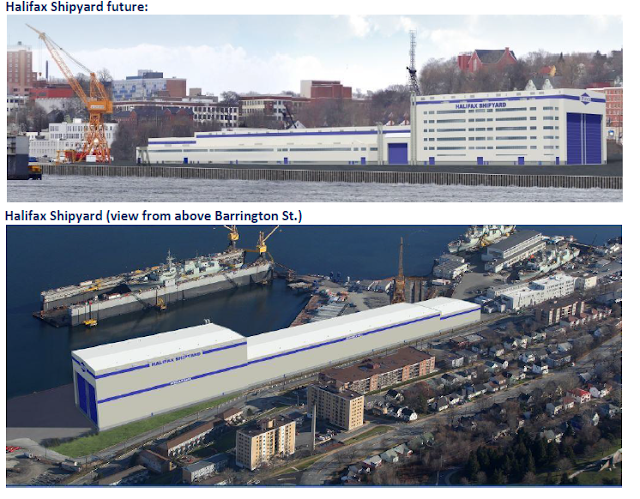 Halifax Shipyard announced what the revamped shipyard would look lie last week, and released some renderings to go along with it.

the plan calls for an entirely new building, featuring a new Assembly Hall with a Steel Assembly area containing a 12m wide panel line and sub-assemblies area, and 11 Unit Assembly /pre-outfit/ 3D unit workstations for pre assembling components.  as well as an 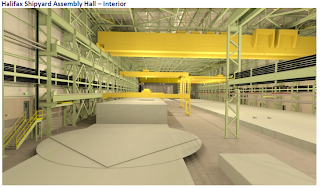 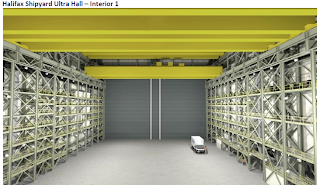 An Ultra Hall (47m high, 408m long) used for Block and Mega Block assembly and Painting will also be constructed.

As seen in the rendering bellow, the launching system will be very different. A land level Construction Point will be constructed in the area around pier 8 at which final ship erection would occur prior to launch. this will abut the existing pier 9. A launch barge area in which a barge would be positioned to receive the complete ship, along with A serviced outfitting pier (165m in length) located alongside the ship erection platform 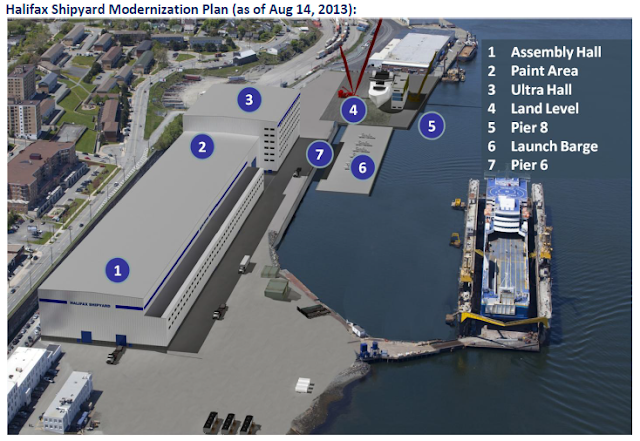 this would suggest that the existing launching ways will be removed, meaning Hero Class #9 will be the last vessel launched from them. 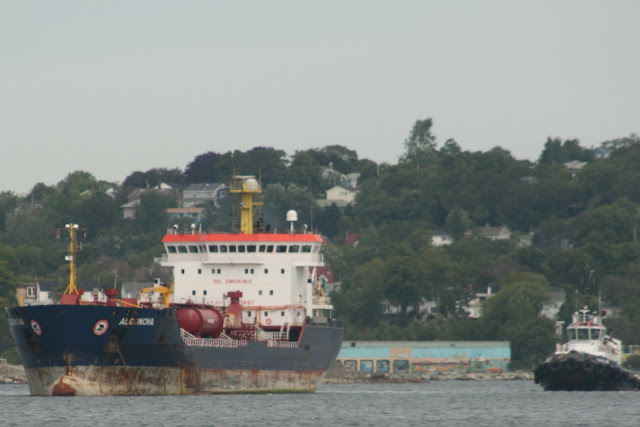 After offloading at Imperial Oil, and Sitting at anchor, the Algoma Tanker AlgoNova proceeded to the NovaDock for some work. 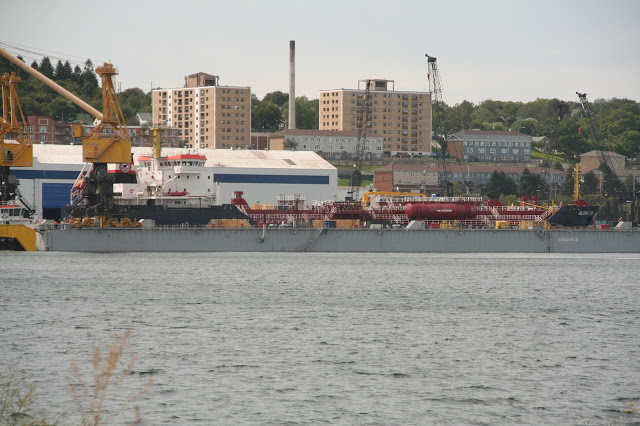 The front fell off?