The Containership Alexandra was todays caller at Fairview cove. Built in 2012, she is rated at 6900 TEU, and is running on the Alliances EC5 service. 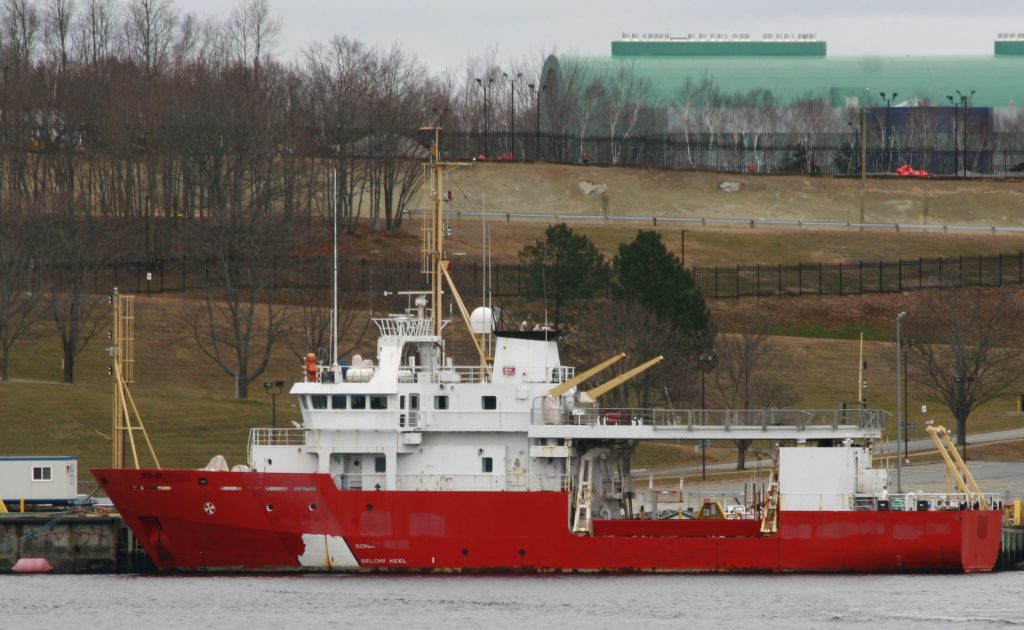 The former Coast Guard hydrographic survey ship Matthew has been sold for $279,000.00. The sale took place Oct 24.  The buyer is currently unknown. The buyer has 50 days to complete vessel registration, we should see the ship registration transferred in the next week or so. Once registered, the new owner has 10 days to have the ship towed form the BIO Wharf.

The ship is still registered to the Department of Fisheries and Oceans, however it was noticed that the ship is now listed for sale, presumably by the new owners, with TriNav Marine Brokerage of Yarmouth.

TriNav is asking 2.4million for the ship – perhaps a bit optimistic given the feds couldn’t sell in 3 attempts with asking prices over a million dollars.

UPDATES to Follow – when we find out who the owner is.

2.Last drop
Sable Offshore Gas project will flow its last gas Monday, and the last phases of shutdown will take place, with the wells being capped. The Jack up Rig Noble Regina Allen has been working to cap the gas wells as the project is decommissioned.

3.This Week in the Herald
This week, You can find me on the front page of the Business Section. The Construction of the Halterm Expansion is Finally underway, for real this time.

Dec 29 1956 – HMCS Magnificent sailed for egypt to deliver troops and supplies, in response to the suez crisis

this week, You can find me on the front page of the Business Section. The Construction of the Halterm Expansion is Finally underway, for real this time.

the Woodward group products tanker Qikiqtaaluk W, has been anchored off Halifax for a number of days, and will be towed into port.

The Tugs Atlantic Oak and Spitfire III will be conducting the move from the outer anchorages to Pier 31. The ship sailed from Montreal on the 23rd, bound for Savannah Ga. under the Marshal Islands flag. it arrived off Halifax on the afternoon of the 26th, and has remained there since.

The Ship was built in Turkey in 2011, and is Ice Class A1. The Newfoundland Based Coastal Shipping is owned by the Woodward group, and spends the summer resupplying the arctic. in the winter, ships are laid up or charted out under foreign flags.

Update: After raising the anchor, the ship actully sailed into the harbour, turned around at anchorage 1, and sailed out again. where it picked up the tugs that brought it back into harbour as a dead ship move.

2. Bad Ice year
The CCGS is predicting this year will be bad for ice. the freeze up started 4 weeks earlier then the recent normal. We include the Ice Chart as part of the Port report.

3. Helge Instead Salvage
the Norwegian Navy Released footage from divers salvaging the sunken frigate. Also the navy is being sued by a Fish Farmer.

4.Container Rack
the terminal operator DP World plans to build a rack to store containers. the rack will enable more capacity and efficiency in the same space. Now – if we could get autoport to install car silos!

The practice of putting a tree at the top of a mast, known as "topping out" can be traced to the ancient Scandinavian religious rite of placing a tree atop a new building to appease the tree-dwelling spirits displaced in its construction. #holidayhistory pic.twitter.com/UUCZOJaHEZ

This week in the Herald, I talk about the Senate’s report into SAR services.

You can read the report WHEN EVERY MINUTE COUNTS:Maritime Search and Rescue(PDF) or view the various summaries on the reports website.

4 British men were rescued from a disabled sailboat last night, 250 nautical miles off Halifax. The 4 were hoisted off the sailboat, and flown to Halifax. The 45′ boat was in 21′ seas, with a 50knot wind (75KM/h) and looks to have  a shredded Jib sail, and lost steering control.

The vessel is the Makena  and was bound for Toronto, via the Canary Islands with an apparently professional delivery crew aboard. The owner had recently purchased the boat.

I have been told that the crew were under prepared, and lacked survival suits. Certainly others have questioned the wisdom of being in a sailboat, in the North Atlantic, In December. If the plan was to make Toronto, they would have encountered ice in the St. Lawrence river, and the pending closure of the locks above Montreal at the end of the Month.

Snow is an ever present obstacle to railway operations. A Jet Blower is stationed in Halifax (and one in Dartmouth), and is used to clear snow from turnouts. A jet engine is mounted on a self propelled unit, and has a controllable nozzle, directing the hot air used to melt and blow snow from turnouts.

I am slowly moving rail content from a tumblr I had to here. The train posts can be found at https://blog.halifaxshippingnews.ca/category/railway. Most will be placed in there historic dates, But some will be combined into new content like this.