McNabs will be easier to explore
A work crew has just started to restore Garrison Road, the main walking trail that runs from one end of the Halifax Harbour island to the other.

Ottawa not ruling out financial aid for Yarmouth-Maine sea link
federal government won’t rule out investing in a ferry connection between Yarmouth, N.S., and Maine until a study is completed in February

Shipyard completing $36-million contract
A METEGHAN RIVER shipyard is finishing up a lucrative contract to deliver 18 aluminum catamarans to England, where they will service wind fields in the stormy North and Irish seas. 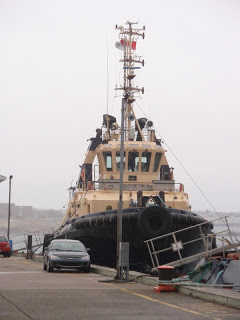 the Svitzer Bedford arrived back in Halifax on Dec 26, She suffered an engine room fire and was abandoned on Oct 28 while on route from Quebec City for Becancour Quebec. 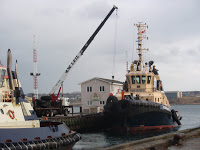 Re-Attaching the Tire Bumpers today. She assisted Atlantic Concert away from Fairview Cove that evening.

Ferry Issues:
Atlantic Vision ferry back in the waterafter the completion of repairs to a hole in the stern.

Seems this Tug was converted to the Fjord Saguenay back in
March 2009 she was repainted and renamed at halifax shipyards then.

She now returns as a new build.

The 92nd Aniversary of the Halifax Explosion.
The Nova Scotia Department of Tourism, Heritage and Culture announced Friday that all photographs, films and archival records on the 1917 disaster have been re-digitized for their website http://www.gov.ns.ca/nsarm/virtual/explosion/default.asp

Ottawa issues tender call for soil cleanup on McNabs
The soil remediation project was prompted by an old oil pipeline exposed when hurricane Juan tore through. The 240-metre pipeline has been oozing bunker C oil since the storm hit metro. The pipeline was part of a navy fuelling depot that supplied vessels and forts in use on the island during the Second World War

as of 1223, the tow out was canceled, and the towing vessels are returning to the dock.

CN Rail Strike News
Its now over, however Halifax was affected.

Canadian Ports Weathering CN Strike
Strike Hits Halifax Railcar Supply – Ship schedules not disrupted, but train delays hamper some port operations
Strike Delaying Trains at Halifax – daily train service was delayed by 16 hours on Nov. 29, the second day of the strike. In turn, that delayed some shipments until the evening of Nov. 30

Tracking boosts port business Software keeps containers from dwelling around. (and you can look them up online Here )

Taken from my blackbery, around 8:30am
Maersk Challenger, Hebron Sea, and Ryan Leet take up their towing positions.

Move over, Thomas: Theodore the tugboat makes stop in Ports.“Theodore Too” made a quick stop in the Port City on Thursday while on its way to Boston for a goodwill tour that seeks to thank Bostonians for their help in providing relief during a maritime disaster that leveled Halifax in 1917.

Coast Guard drops search for missing Halifax sailorHubert Marcoux, 67, had hit high seas, strong winds on the way to Bermuda earlier this month and failed to arrive as planned a week ago

Halifax Shipyard lands refit of HMCS IroquoisHMCS Iroquois will arrive at the yard Dec. 15 for a major refit. The vessel will be in the yard until late 2010.

In September, Halifax Shipyard was awarded a contract to build nine midshore patrol boats for the Canadian Coast Guard. The first vessel will be delivered in 2011 and the rest of the boats will be in service in 2013. Earlier this year, the yard landed a $60-million contract to build an offshore supply vessel for EnCana Corp.’s Deep Panuke natural gas project. Construction of the vessel will employ up to 200 people. And in 2008, the shipyard landed a $549-million contract to extend the life of seven of the navy’s Halifax-class frigates. That program is underway and will last until 2017.