Canada Steamship Lines vessel Spruceglen on trials in the basin after a Maintenance period which included being re-flagged to Canada and being re-painted in csl’s domestic scheme, which is why she looks so clean 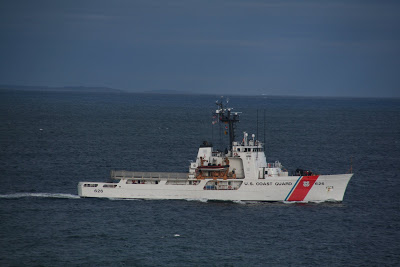 USCG Dependable departed after a short visit today, just after 1400. Here she is passing Chubucto Head having just dropped off the Pilot. 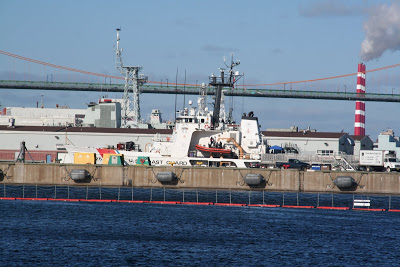 USCG Dependable Arrived this morning for a visit, and tied up at NB4, leaving the dock in the way.
She is likely here to help commemorate the 50th Annivarsary of the Canadian Coast Guard which was formed on January 26th 1962.

Find out more at http://www.ccg-gcc.gc.ca/eng/CCG/50th_Anniversary

The Tug SCOTT TURECAMO with barge NEW HAMPSHIRE at anchor this morning, surrounded by sea smoke.

CBC news is reporting that a naval intelligence officer was arrested for disclosing information to foreign entities. Lt.Jeffrey Paul Delisle is reportededly tasked with monitoring shipping movements in the North Atlantic, and is based HMCS Trinity, which is housed within the Halifax Dockyard.

The navy monitors shipping movements in and out of Canadian Waters. This is done both via satellite and via P3 Auora aircraft. Vessels entering Canadian waters are required to report 24 hours in advance. This maritime surveillance can detect illegal dumping and fishing, as well as smugglers.

Update: speculation. Reports suggest that the information was leaked to the Russians. According to Wikipedia, one of the functions that was transferred to HMCS Trinity was the operation of the sub sea surveillance network, which was jointly developed with the US Navy during the cold war to detect foreign submarines. It was operated from CFS Shelburne, which closed in 1995.

Since the network can detect submarine movements, and it was jointly developed with the US Navy, presumably Canadian naval intelligence knows the positions of US Navy, and Possibly British submarines in the North Atlantic – which would certainly be of interest to the Russians.

Onego Chinook, currently anchored in the basin, looks an awful lot like MCP Troddos currently at anchor in the inner harbour. this is because they are twins. Both vessels wre built in 2007 by Huanghai Shipbuilding in Rongcheng, China and are managed by Intership Navigation of Cyprus. Onego Chinook was MCP Nicosia until Febuary 2011. 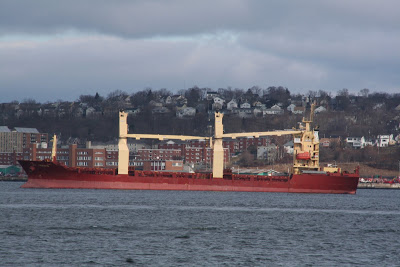 MCP Troodos (ABOVE) is apparently waiting for work, having last departed Trois Rivers Dec 24th. Onego Chinook is Due to dock at pier 27, likely with a load of rail for CN.

Updated now that the weather has allowed me to get a picture of Onego Chinook. 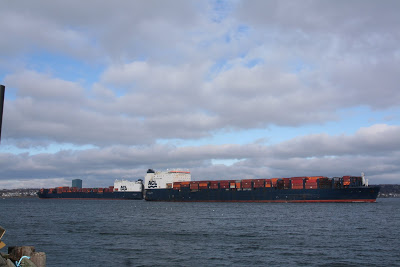 OOCL Shanghai, Currently at anchor in the outer anchorage, is due tomorrow for Fairview. She is a new vessel server the the OOCL/Hapag-llyod Pacific East Coast Express service. Other recent additions were covered in a December Post.

Probably the most exciting news is that Halifax Express will Call in Halifax for the first time, March 19. I believe this will be a newly chartered vessel as i can find no record of her currently.

By far the most popular post of 2011 was Caribou and Smallwood on the Beach in Alang with over 700 direct views since it was posted Nov 1st. Since the blog allows full posts to be to be read without clicking on them many more have read it I’m sure. This only shows the affection these ferries that people have. These to ships stopped for bunkers in August as their last Canadian stop before heading overseas.

In the offshore field, 2011 saw the departures of the platforms PSS Chumul and Rowan Gorilla 3, and the arrival in December of the GSF Grand Banks. Several support vessels from the deep panuke project also made appearances. These Platform posts were also among the most popular – likely because of the unbelievable size of the vessels.

In navy news, HMCS Charlettown departed In March and returned in September from the mediterainian becoming the first Canadian warship to engage an enemy and exchange fire since the Korean war. HMCS preserver also came out of refit, and collided with the Nova Dock a few days latter. Visitors included several US , Icelandic and French Coast Guard, British and American nuclear submarines, British Destroyer, USNS Wright, and a rare east coast visit by the Japanese defence force.

In port traffic, 2011 Saw the start of the American Feeder Lines service, the halfing of Zim’s service and the cancelation of the green alliances service. Cruise traffic picked up again despite several weather cancelations.

Halifax Shipyards was selected as the winner of the Federal Shipbuilding Procurement strategy, Began the Midlife refits on the the Halifax Class Frigates and Unveiled the first Hero class Mid Shore Patrol Vessel.

The port continued various improvements, with work at Pier 41/42 and 9..
And the regulars came and went..

The last departure of 2011 was the London Express. The last arrival was the Thailand Express who spent the night. Since the port is closed today, She will likely commence cargo operations Tomorrow. The first arrival of 2012 was Halifax regular Atlantic Condor.