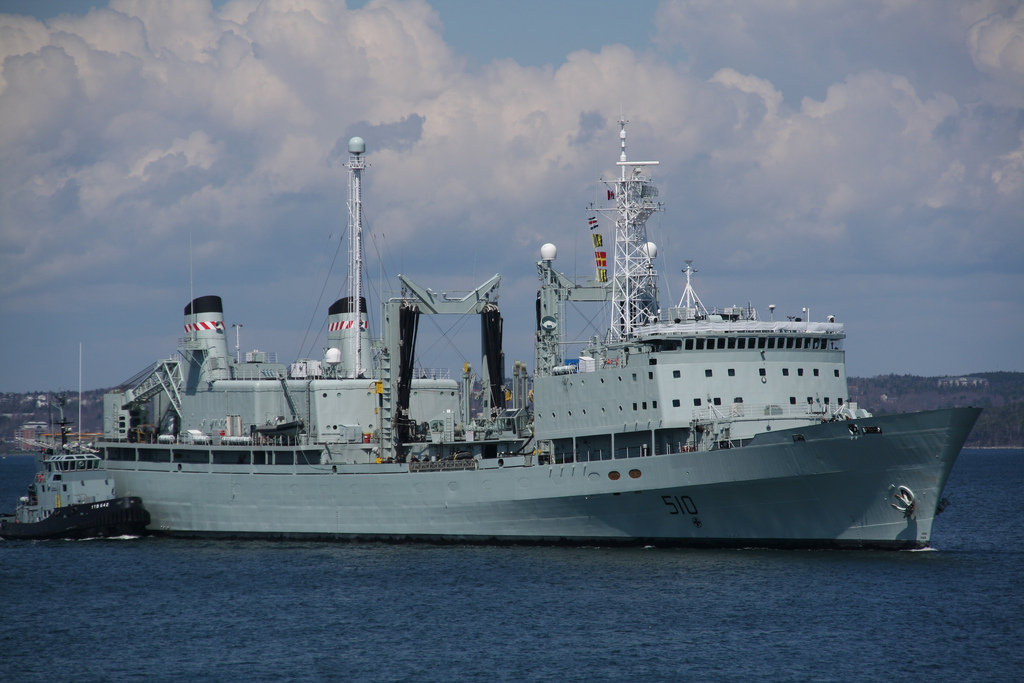 HMCS Protecteur was returning to its homeport of CFB Esquimalt, B.C., when at 10:20 p.m. Pacific Standard Time yesterday, HMCS Protecteur contacted the Regional Joint Operations Centre (RJOC), located at Maritime Pacific Headquarters (MARPAC) at CFB Esquimalt, B.C., to report a fire onboard the vessel. The fire was in the vessel’s engine room. Sailors onboard the warship put out the fire and crew members are managing the situation. Personnel sustained minor injuries but are safe and they are being treated on board.

Protecteur is presently located approximately 340 nautical miles (630 km) northeast of Pearl Harbour. The ship has limited power and a return to Pearl Harbour is expected. A full assessment of the situation is being conducted to establish the extent of the damage.

MARPAC personnel are in contact with U.S. Navy personnel at Third Fleet headquarters. The U.S. Navy has sent the destroyer USS Michael Murphy, to provide assistance to Protecteur.

UPDATE: Apparently the fire was major, and took a long time to bring under control. Protecteur is now Dead in the water and waiting on tugs to arrive to tow her back to Pearl harbour.

Over the next 24 hours it is anticipated that HMCS Protecteur will be taken under tow by the USS Chosin and start her transit back to Pearl Harbour. Once in Hawaii, efforts will commence to prepare Protecteur for her return to Esquimalt. We remain in very close contact with the Protecteur family members.

The Royal Canadian Navy is very appreciative of the tremendous support that has been provided by the USN and United Stated Coast Guard throughout this very difficult situation. It is yet another example of the strong relationship and interoperability that exists between our navies. 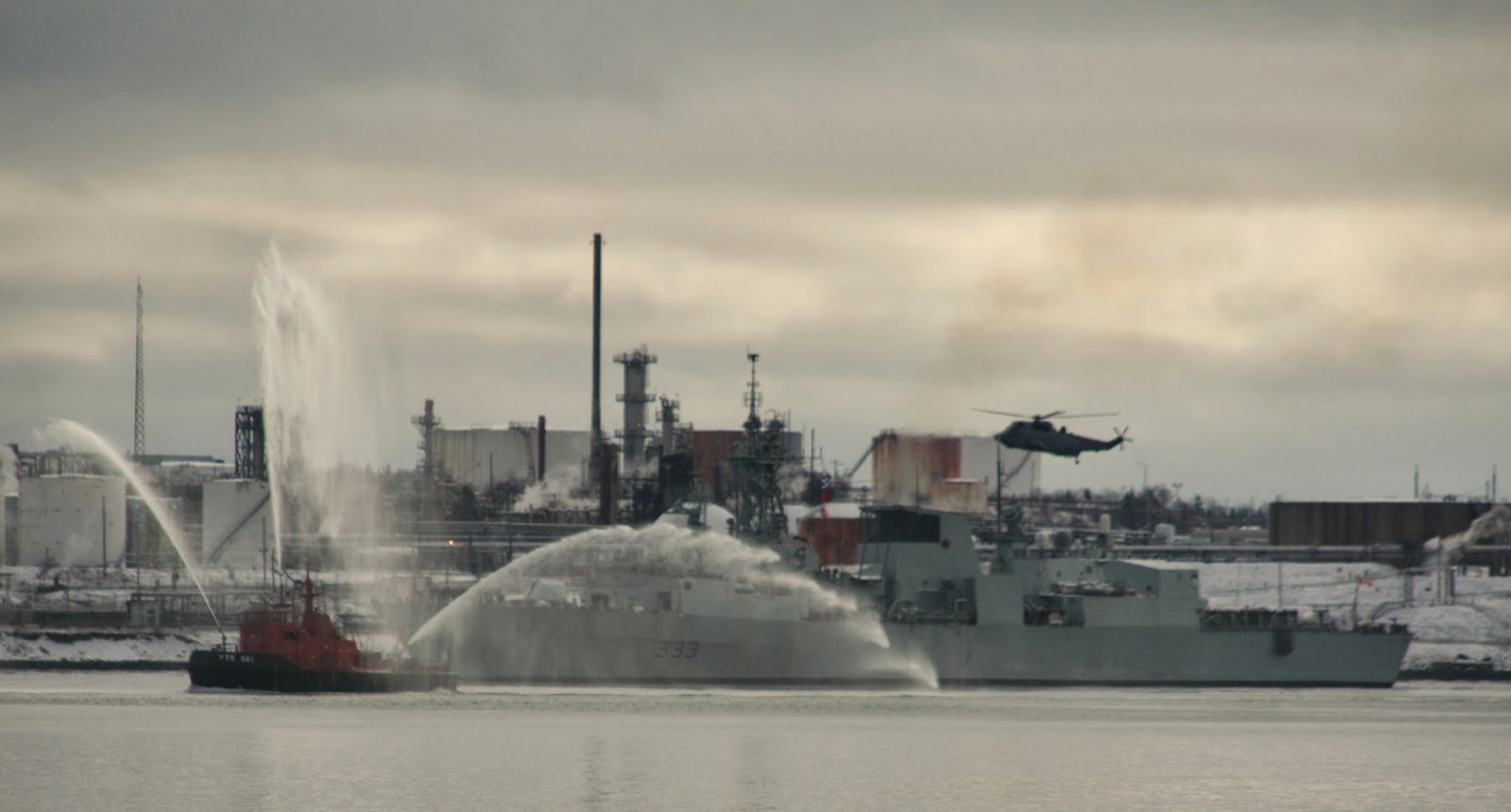 (Above) Firebird Sprays a salute, (below) Crew on deck for Homecoming. 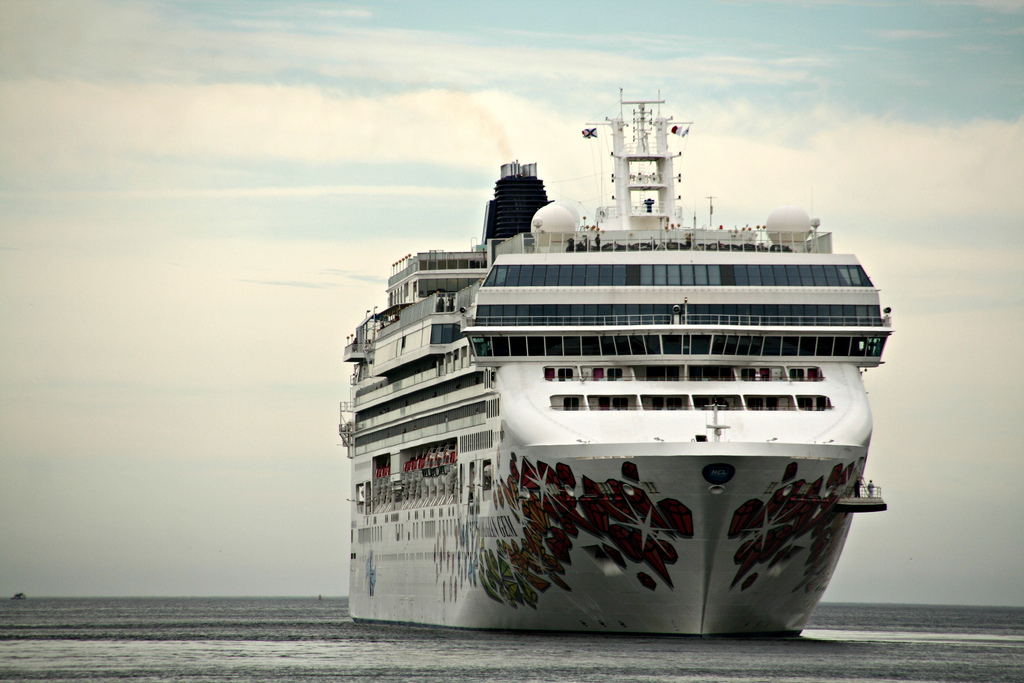 The 2014 Halifax Cruise Schedule was released, and Begins on May 4th with the arrival of Celebrity Cruises’ Infinity, and ends Nov 15th with First time visitor Hamburg.

Maasdam is back as a regular, though Carnival Glory has been replaced by the Carnival Splendor and only in the fall. Also of Note is the Arrival of the Pearl Mist in July, and Again in October. Pearl Mist you may remember was built at Halifax Shipyards, and then laid up in Shelburne over contract disputes. (See Posts Here)

The full schedule can be found at http://www.cruisehalifax.ca/our-visitors/index.html 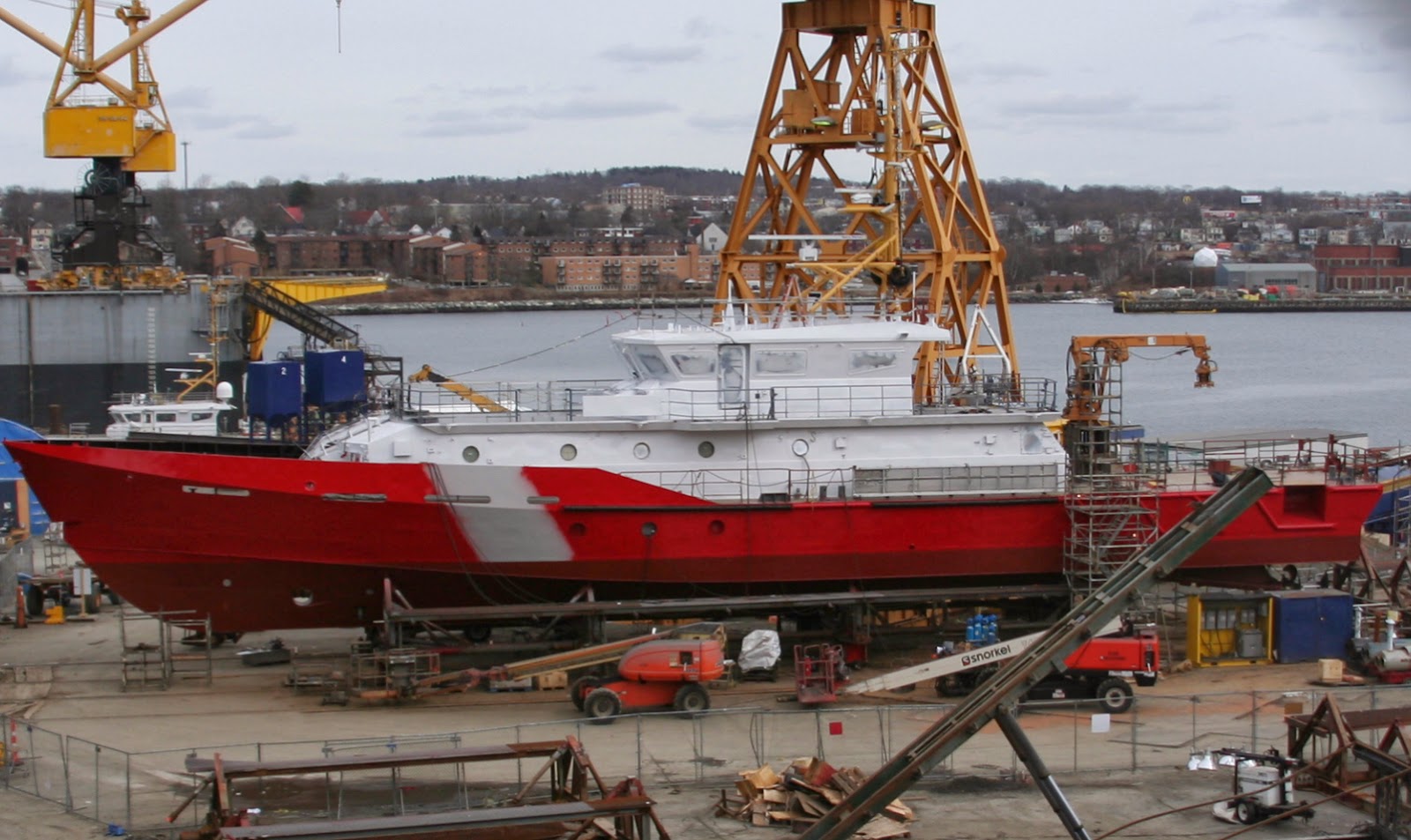 The CCGS Captain Goddard M.S.M was rolled out on Monday, after the launching of the CCGS M. Charles Saturday night. With the rollout having occurred, demolition of the remainder of the building can continue, and was quickly resumed this past week. Unlike the previous vessels, she was painted while still in the shop, though is missing her white stripe, name and coast guard markings. 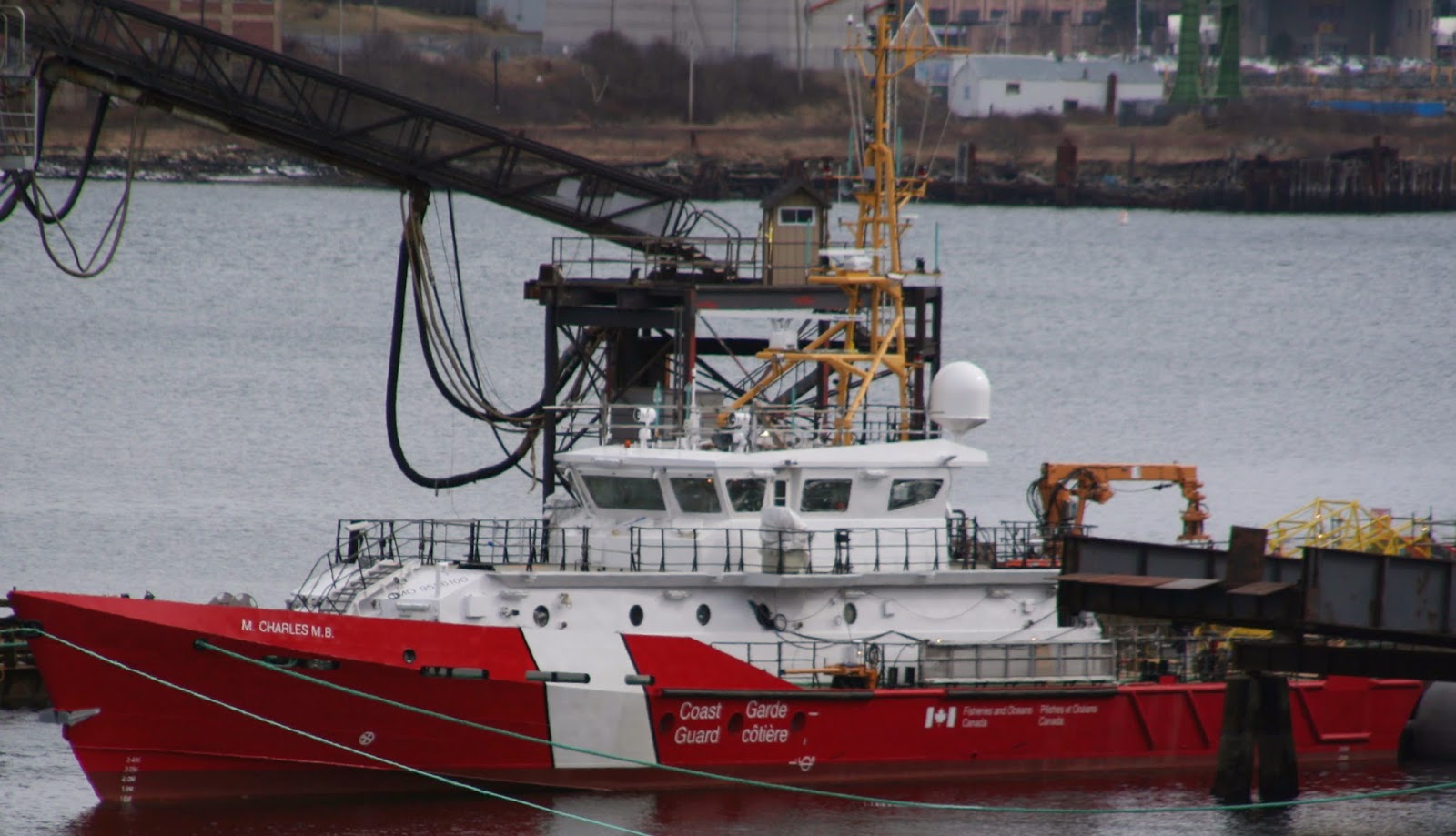 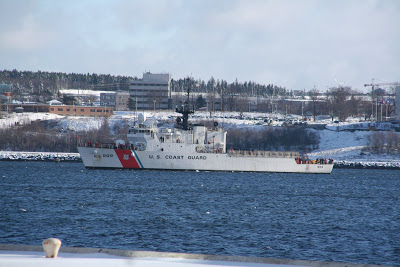 Yesterday saw the Departure of the FGS Bonn from the dockyard. Today brought the arrival of USCGC Campbell. Campbell was last in Halifax back in Nov 2011. Us Budget constraints have reduced visits by US vessels in Recent years.

Approximately 900 personnel from the Royal Canadian Navy and Royal Canadian Air Force are participating in a major fleet exercise this week until March 14, 2014, off the Eastern seaboard. This exercise will also see the contribution of United States Coast Guard vessel, USCG Campbell, and the Federal German Ship (FGS) Bonn, a Berlin-class replenishment ship 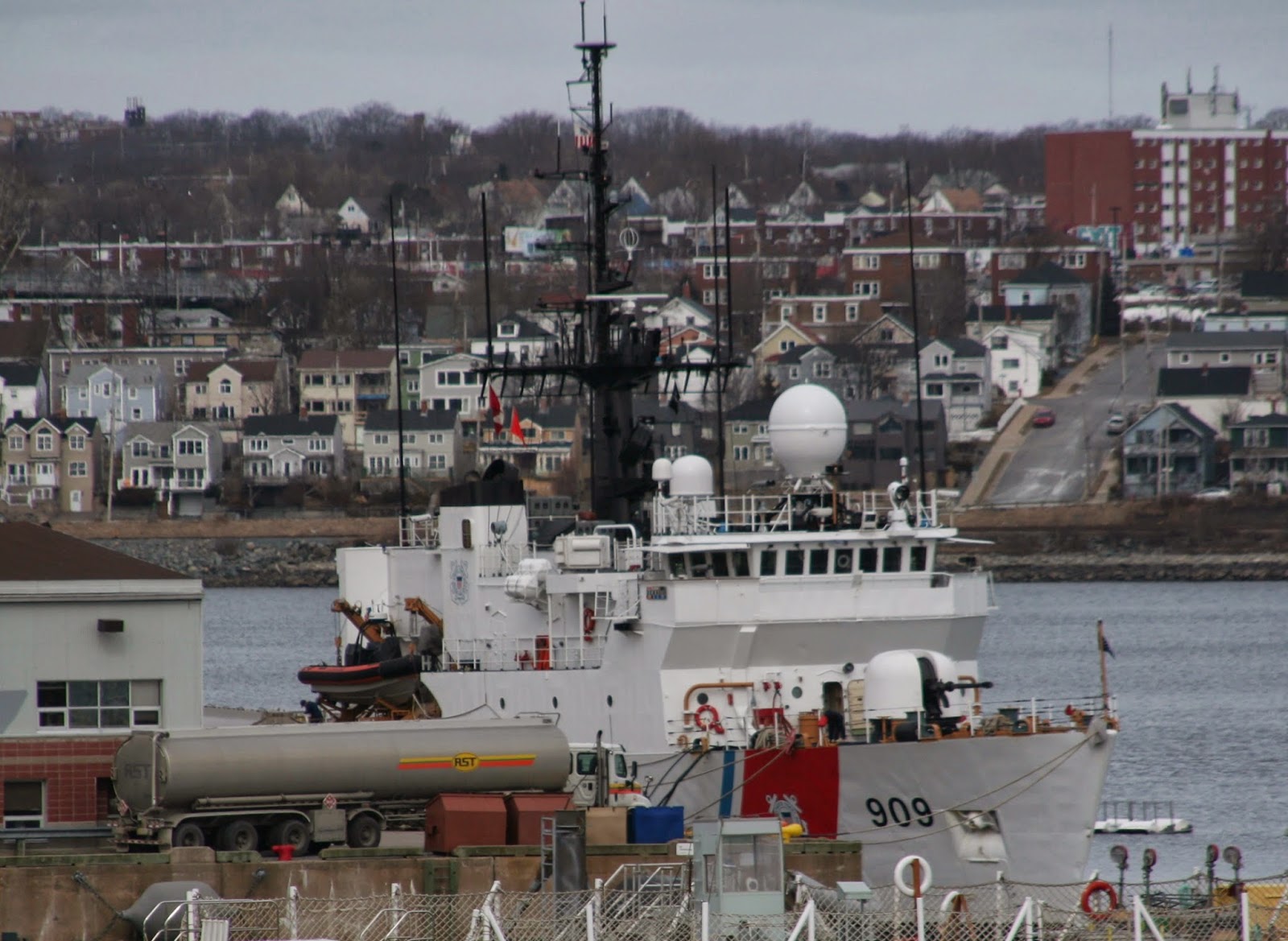 Monday Night, Asian Emperor moved to Fairview Cove. I am told no cargo operations are underway, however repairs to the ship are occurring with various welders working on the vessel.

For people with cars on this vessel, it seems unlikely that any vehicles will be transferred to the Don Juan, which is due 1800 tonight, 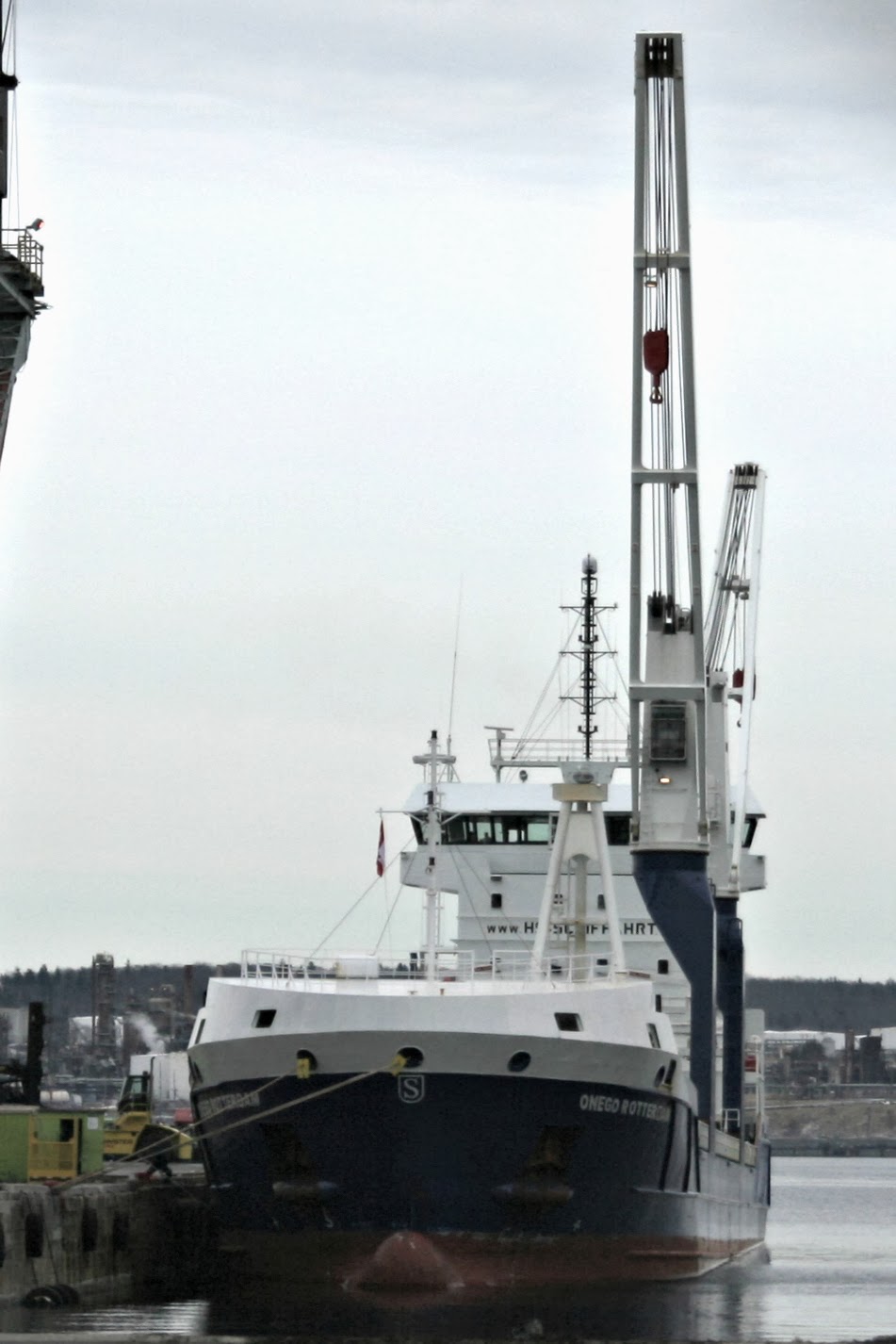 Another Small General Cargo vessel with Rails for CN. Like other rail deliveries, this vessel features dual cranes, and a box type open hold.

Hero #9, still in the Shop has been painted. As its the Last ship, and the building is coming down when complete, i assume they didn’t care about getting paint everywhere.

Hero #8 M.Charles, is due to be launched tomorrow Night, at 11pm. 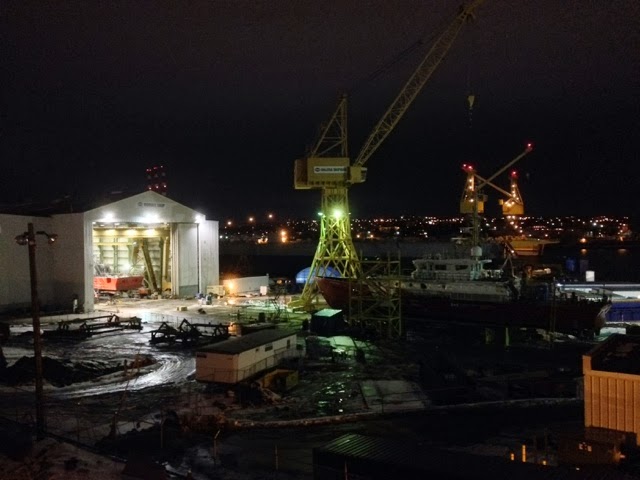 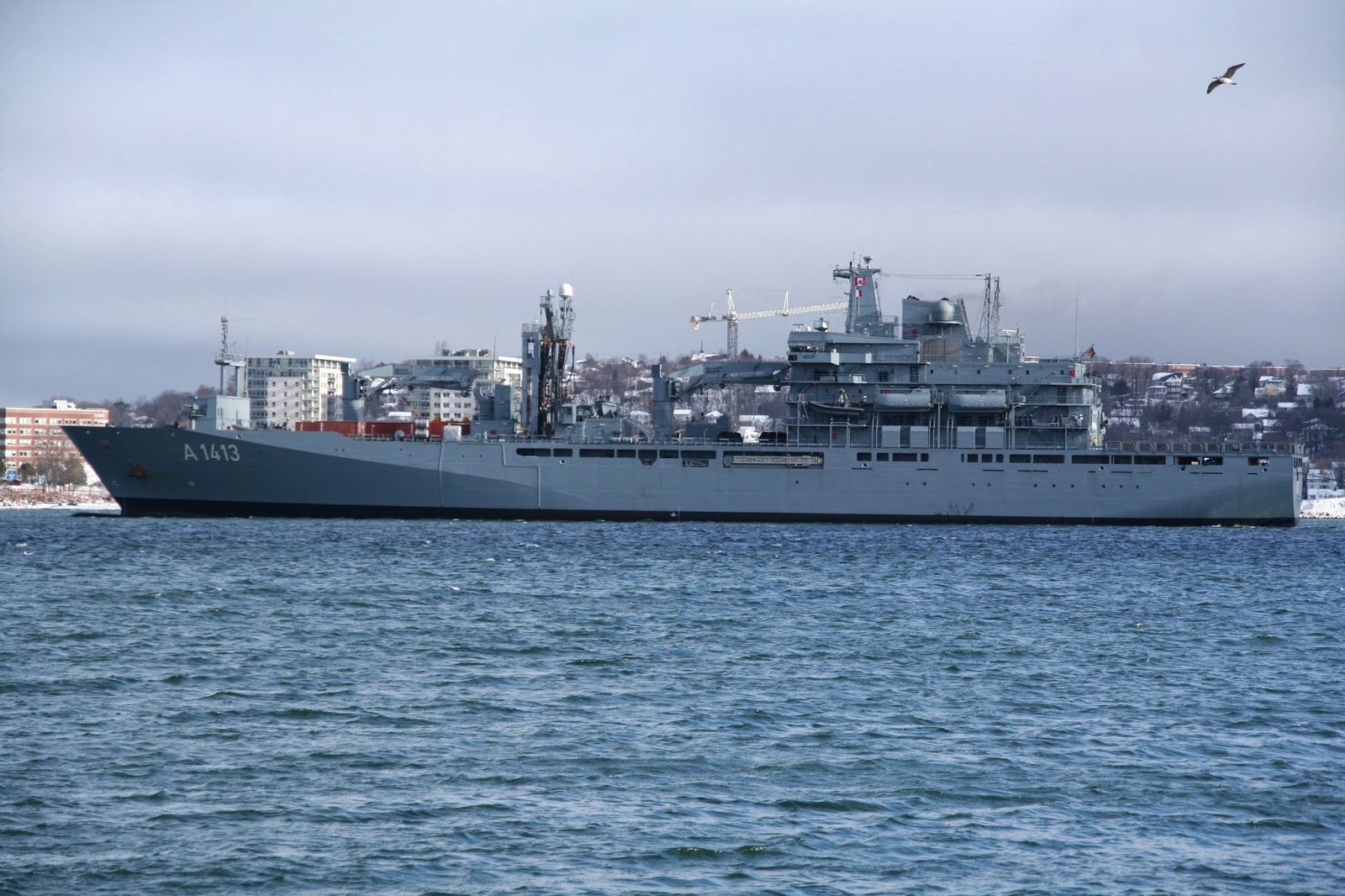 German Naval Supply Ship FGS Bonn Arrived this morning for a port visit. She spent the past few days circling outside the harbour. Bonn is of the base design for the new JSS to be built under the NSPS.

German Naval Supply Ship FGS Bonn is currently approaching the Pilot station
Expect her in town in about 45min.