This week in the Herald I talk about NeoLine, the French firm that is proposing a new transatlantic service by sail powered RO-RO vessel. The Firm has a shipping commitment from Michelin, which would see this service call in Halifax starting in 2023.

Not to be out done, Wallenius Wilhelmsen plans a sail powered PCTC in 2025. The Orcelle Wind will carry 7000 cars at 11 knots under sail.

Cargo under sail happened in Halifax in 2019 in a very traditional manner with the arrival of the Cargo Schooner Avontuur with a load of coffee bound for Just Us.

The Horizon Highway Sailed from Southampton on the 9th, and looks to have lost power on the 15th, and drifted before regaining power, or being taken under town by another vessel on the 16th. It was suggested that the main engine was vapor locked.

the Siem Commander sailed from Halifax the morning of the 19th.

This is yet another case of Laid up Secunda vessels providing emergency assistance. Venture Sea was recently dispatched to tow the Golden Opal, a bulk carrier that became disabled in the Davis Straight after departing the Baffinland mine in Mile inlet bound for Immingham, England. Both those ships are now in Nuuk Greenland.

Car Carriers have become a more rare site in recent months thanks to covid, but Toscana called at autoport today. Toscana is a frequent caller in Halifax, and recently changed paint schemes. She was previously Red and white.

The car carrier Grand Diamond tied up at pier 9c this afternoon to offload 350 cars. The ship will likely be heading to Montreal, and needs to reduce its draft to make up up the river. The cars will then be picked up on the way back. the Ship Sailed at 16:00 giving Singapore as its destination. the ship will sail via the Suez Canal. i suspect the cars are either for local delivery, or another ship will be along to collect them.

The ship arrived from New York, and is likely carrying some sort of project cargo. This happened once before, in 2015, the Glovis Century lightened the load to pick up Military equipment. Since then, the car carriers Toscana and Onyx Arrow also tied up at pier 9 for work periods.

The Port Authority has confirmed one Vessel is undergoing Assessment by the Public Health Agency of Canada. The Port Authority referred me to CPHA for more details, however they are not surprisingly taking a long time to answer the phone.

It seem likely that the effected Vessel is The PCTC Siem Cicero, which arrived off Halifax on the 22nd having sailed from Emden Germany March 9th. The Ship has been circling off the coast Since the 22nd.

Arriving Ships are required to report any illness onboard 24hours prior to arrival in Canadian Waters. given 14 day quarantines, its likely the ship will be held until 14days after the ill crew recovers.

UPDATE: the CPHA got back, and confirmed that several cases of illness consistent with Covid-19 on board the ship were reported on the the 17th. Under section 39 of the Quarantine Act, the ship will not be permitted to enter port until 14 days after the last symptoms.

The ship is currently giving an ETA in Halifax of the morning of April 6th.

Grande Baltimora was a late arrival for Autoport today, picking up the pilot at 3:30 this afternoon. A newish build Car carrier, the ship is a sister to Grande Halifax.

Ships were delayed entering port yesterday due to weather. Ships started moving in the Evening, though weather remained an issue. the pilot boat was directing vessels to turn to starboard, and sail a course of 030, in order to shelter the pilot boarding operation. The First ship to arrive at 1900 was the YM Movement for Fairview Cove (Above).

Second in line was the PCTC Grande New York (above) which sailed for Autoport. The Cruise ship Fram was the third vessel to arrive. It was scheduled to arrive yesterday morning, but instead spent the day waiting out the weather in the approaches. the Ship extended its stay, and will now sail this afternoon.

The PCTC Sincerity Ace caught fire Dec 31, 1800 nautical miles west of Hawaii. The crew attempted to fight the fire, but has since abandoned ship. 16 were picked up safe, 3 were found deceased in the water, and 2 are missing.

A car fire is a job by itself. Put that car fire in an enclosed space, with additional vehicles in very close proximity, and the fire has the potential to become very large very quickly. A photo posted to social media shows the ship with significant damage to the side of the ship reaching from the upper part of the Blue section, right to the top of the vessel. This suggests multiple decks are involved. – the area of the fire would be where the ramps between decks are located, providing a channel for fire spread.

Controlling the fire will likely prove to be very difficult, as there will be limited direct access to the flames without boarding the vessel. the fire will probably need to burn itself out, then the salvagers can put out any hot spots.

The ship was built in 2009, and is part of the MOL car carrier fleet. The ship called at Autoport once in February 2013.

Sincerity Ace is reportedly still on fire and listing to starboard. the search for the one remaining unaccounted for crew member has been called off.

Fires on Car carriers are not a new Issue. Last year the Honor caught fire after a recalled part in a car aboard the ship triggered the blaze. Another Ship, Courage had a similar fire in 2015.

Here's some video footage of the Sincerity Ace on fire in the Pacific Ocean. #SincerityAce pic.twitter.com/wA7tQca1HF

in May 2018, the Auto Banner Caught fire in port in Korea, leading to the dramatic video above.

the PCTC Onyx Arrow tied up at pier 9 over the weekend, after discharging cargo at Autoport. Since the ramps were not lowered, the ship wasen’t there to handle cargo and likely has a mechanical issue. I have been told the ship has an issue with its CO2 fire suppression system.

Many ships have CO2 fire systems in their engineering spaces. Essentially, if a fire is detected, the space is isolated, then CO2 is released into the space, lowering the percentage of oxygen in the air, starving the fire. 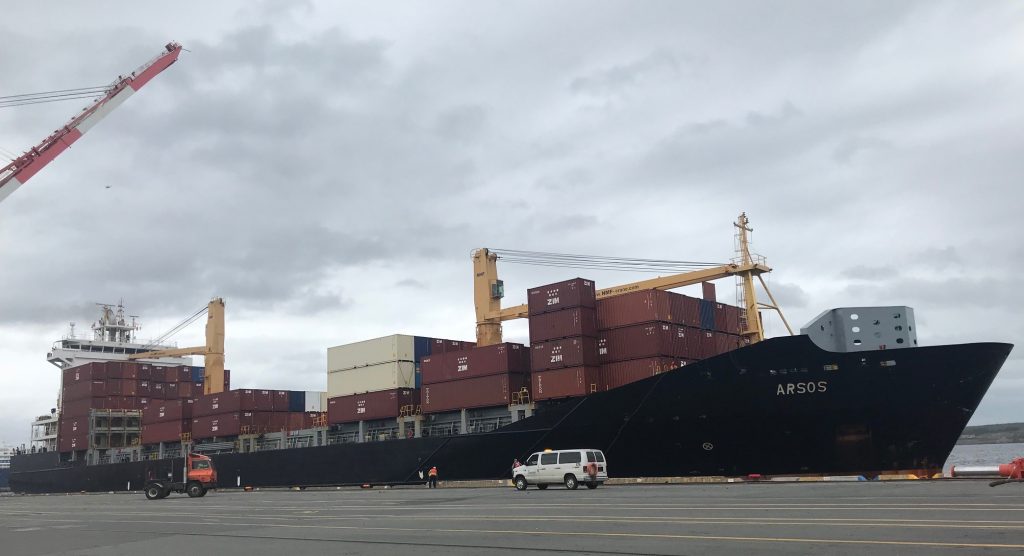 (Above) Arsos backed into pier 42 just after noon. Shes running on the New ZIM Canada Florida Express service to Jamaica. Heading out from Autoport was Taurus Leader (below). Shes bound for New York. 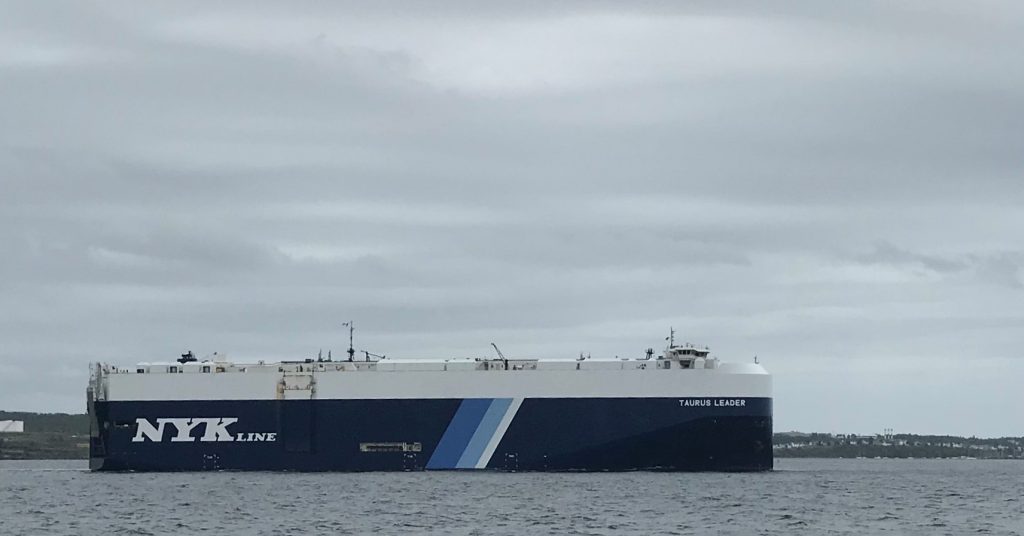 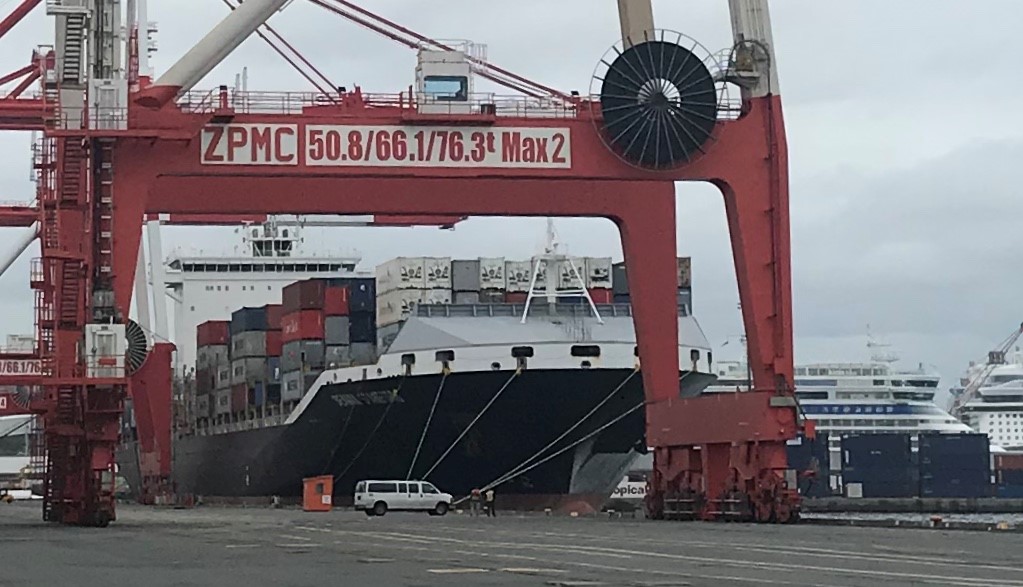 Seamax Stamford (Above) is at Pier 41, calling on the Maersk line Med/Montreal express(MMX) service . The Bomar Rebecca (below) is hanging out at Pier 26. She was offloaded earlier this week, and went to pier 26, presumably to wait out Hurricane Florence. She sails for tropical shipping, which canceled their sailing this week. 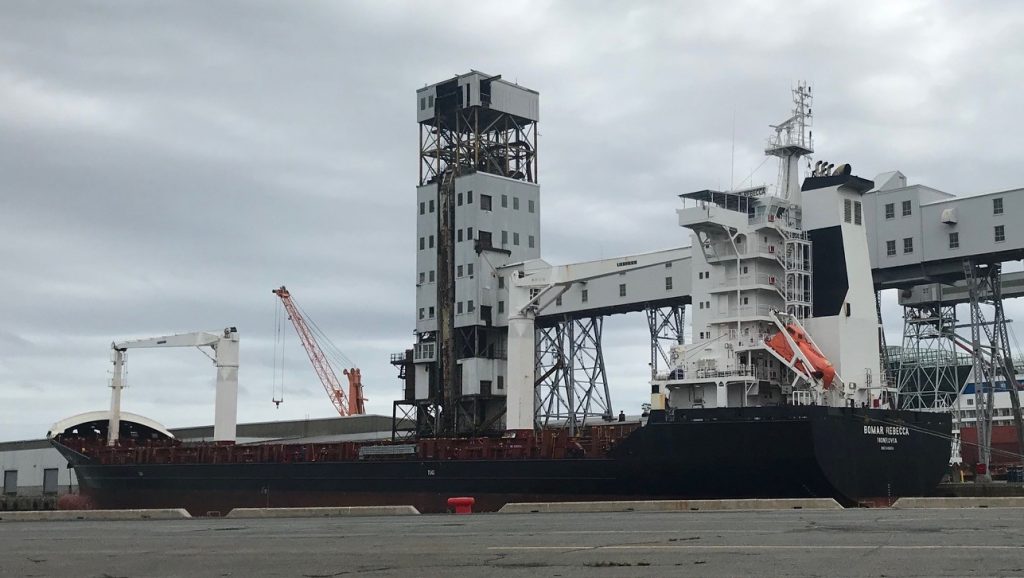