This week in the Herald, I discuss covid-19, and its impacts on the port, and large offshore projects. as well as the sting of record breaking container ships to call in the coming months.

Since submitting the article:

A rare sight, A Car Carrier Anchored in the Basin. This is likely due to autoport being closed for Easter, and also apparently for a CFIA Gypsy Moth Inspection. With Large tankers tieing up the inner harbour anchorages, the Basin was the only other option.

This is not the first time a PCTC (Pure Car truck Carrier) has been in the basin. In March 2011 Osaka Car tied up at firview cove. Hoegh Masan has also been to halifax before, in June 2011 as CSAV Rio Salado.

The Products Tanker Sloman Hera at anchor in the basin. She arrived yesterday evening. She is likly waiting her turn to tie up at Imperial Oil to load. 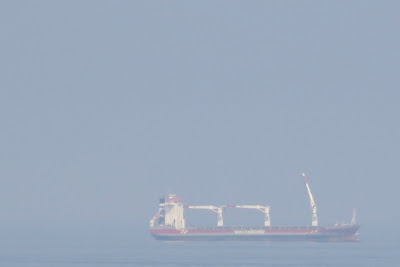 AUSTRALIABORG in the Outer Anchorage Update (April 17:) She Departed the Anchorage at 1530 for Baie Comeau