Shipfax is reporting that the tow line parted today setting HMCS Athabaskan adrift of Scatrie Island, where the M/V Miner is grounded on shore.

Athabaskan was towed into Sydney by the backup tug Andre H, and is reported to be safe.
For more see shipfax http://shipfax.blogspot.ca/2012/12/hmcs-athabaskan-tow-in-trouble.html

Addtional update from shipfax – there may have been contact and Athabaskan has been damaged. Read more here and Here which has addtional photos of the damage.

UPDATE 01/01/13: I have received confirmation from a source that there are punctures on the port side of the hull, near the Numbers. Shipfax has the photos

UPDATE 02/01/13: Shipfax is reporting Atlantic Towing will be completing the tow and has tugs in Sydney. They have a good synopsis here

CBC news is reporting “The Iroquois-class destroyer, which is currently docked in North Sydney, has at least seven holes in its hull along with several dents and scrapes. It also appears the ship’s frame may be warped along the waterline.
The Royal Canadian Navy declined to comment to CBC News about the extent of the damage.“
the story included this video of the damage 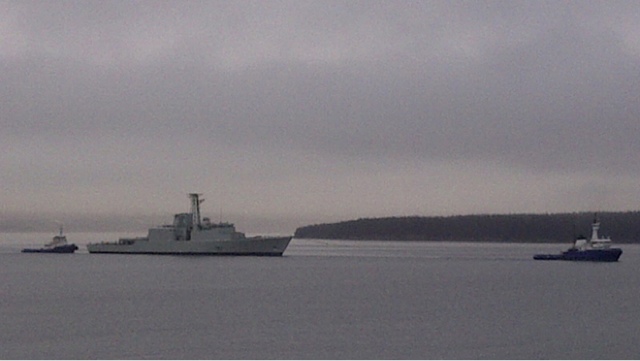 Capt. Doug Keirstead, a spokesman for Maritime Forces Atlantic, said there was no one on the ship at the time, but there were people on the tug.

He said the line was reconnected with the help of a Cormorant helicopter from the airbase in Greenwood, N.S.

“One of the crew members who was on the tug was lowered down to Athabaskan to reconnect the line, as was a member of the tug’s crew,” Keirstead told CBC News on Sunday.

Athabaskan was in St. Catharines, Ont., for a refit. It was on its way to Halifax for the winter when it went adrift.

Once the line was reconnected, the ship was towed to Sydney to wait out the current winter storm. It’s not known when it will resume the journey to Halifax.

The HMCS Athabaskan drifted in the North Atlantic for hours off Scatarie Island, which has been home to the wreck of the bulk cargo ship, MV Miner, for the past 15 months.
Capt. Doug Keirstead, a spokesman for Marine Forces Atlantic, said the tow line broke due to the poor weather in the region at the time.
There was no one on the Athabaskan at the time, said Keirstead, adding the immediate concern was for the safety of the crew towing the vessel to the Halifax naval dockyard.
“It was drifting at about 0.5 knots, so it was going very slow,” he said, Sunday.
“I do know that they were far enough offshore to allow the ship to be reconnected safely and efficiently, and of course be towed into Sydney at that point to safely avoid the poor weather.”
Keirstead said he was unsure of the exact distance from shore, but given the drifting speed of the Athabaskan, and the time it took to have a Cormorant helicopter fly from its Annapolis Valley airbase in Greenwood to help reconnect the tow line, the ship wasn’t in danger of running aground.
The commercial tugs, contracted by the Canadian Forces, pulled the Iroquois-class destroyer into Sydney harbour late Saturday afternoon.
The HMCS Athabaskan, which has been in service for the Canadian Forces since 1972, had been undergoing a refit in St. Catharines, Ont., and was being towed back to its home port of Halifax prior to the winter closing of the St. Lawrence Seaway.
It hasn’t been determined when the ship will resume its voyage to Halifax, Keirstead said.
He said it’s not unusual for a tow line to break.
“When we’re having to contend with severe weather conditions, which include high winds and rough seas, that can place a challenge on towing a vessel like that.”
It’s not expected there will be an investigation into the tow line break as it’s a “reasonably straight forward issue,” Keirstead said.
However, he noted the Canadian Forces always looks at lessons learned and how that can be applied to future tows. 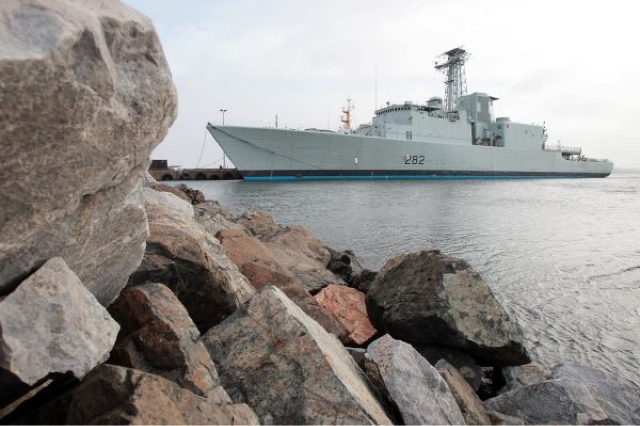 The HMCS Athabaskan was tied up at the Osprey dock in North Sydney, Monday. The Canadian destroyer, which was being towed by two tugboats from St. Catharines, Ont. and had its tow line break off Scatarie Island, will remain in Sydney harbour until weather conditions improve, and then continue on with its trip to the port of Halifax. (additional image Steve Wadden, Cape Breton Post)

Don Merritt photos of the damage 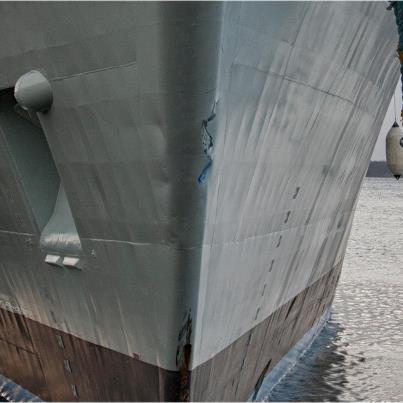 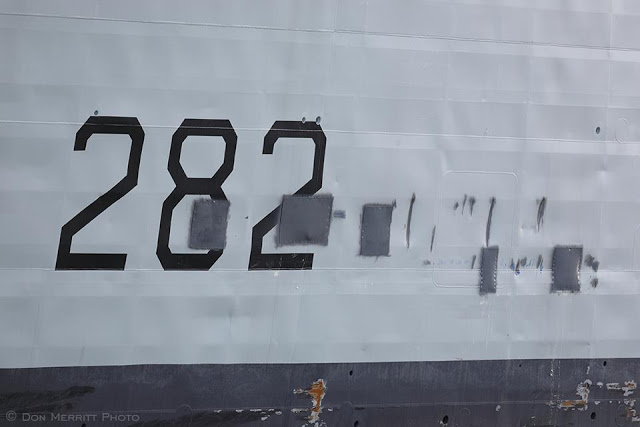 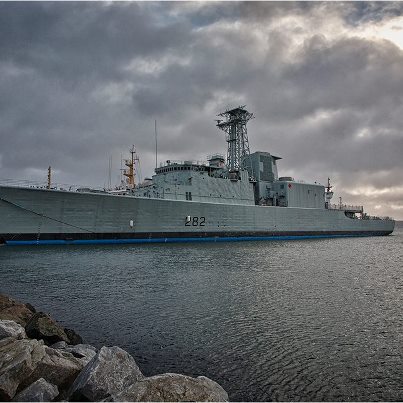 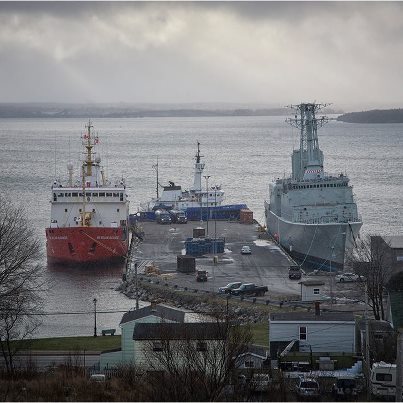 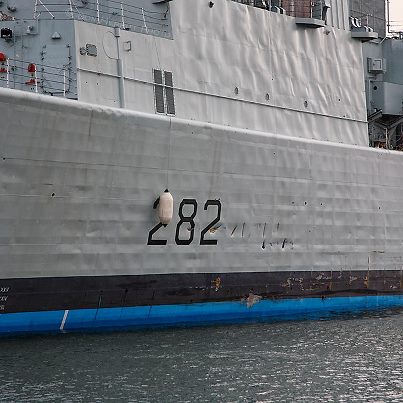 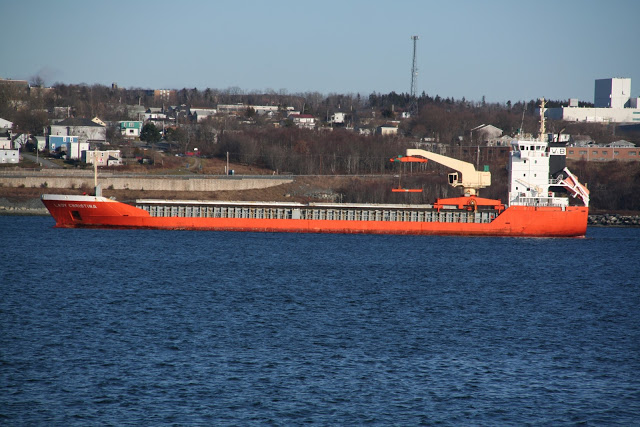 (Above) Lady Cristina, for bunkers. She has been to Halifax before. (bellow)Peter Roenna, Owned by BBC Shipping, she is a sister ship to Nils B 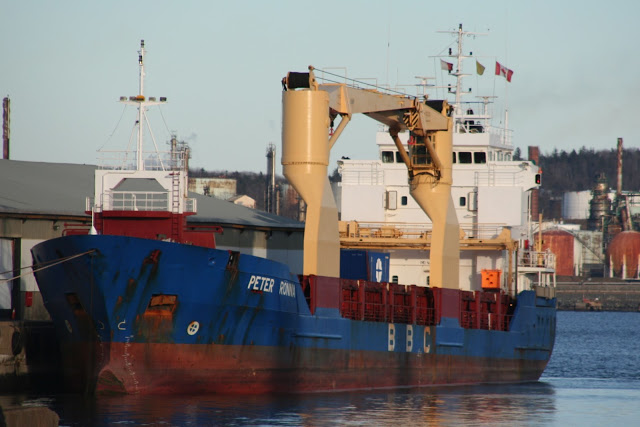 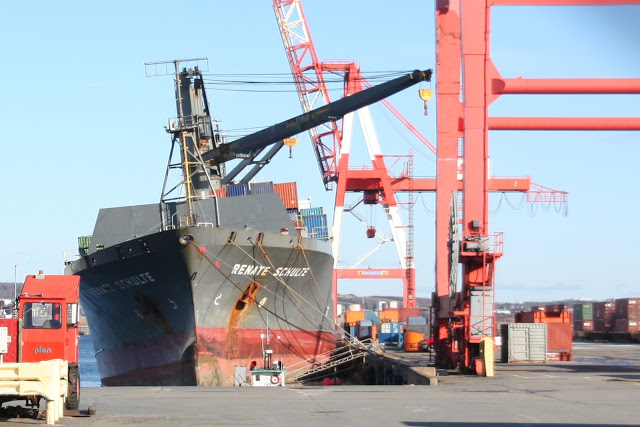 The container vessel Renate Schulte has been laid up at halterm since before Christmas. What was originally thought to have been holiday related delay, turns out to be a hull repair. she reportedly has a 4×4 hole cut in her port side as the anchor came loose and cracked a plate. As a result of the crack, the bow thruster compartment flooded.

Thanks to Mac at shipfax for the tip that there was an issue with the vessel.

UPDATE: word is the original contractor walked away from the job in some sort of dispute. The work was supposed to be completed in Ireland. 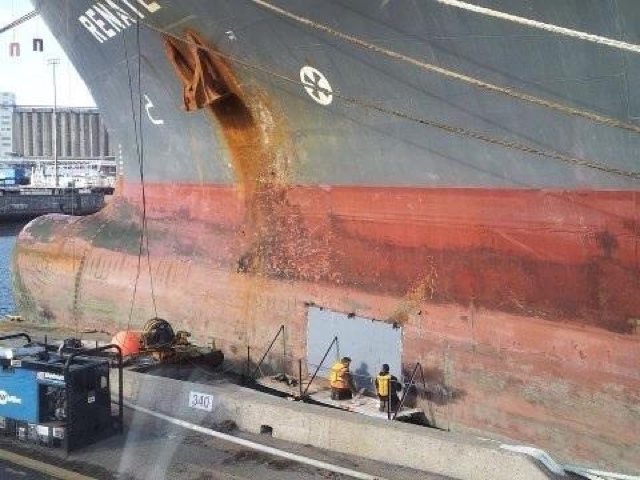 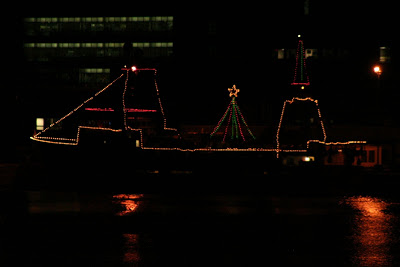 The tall ship Caledonia has spent the past several years in lunenburg. She was refit, and then her owner went bankrupt, leaving the vessel in the care of Caterpillar Financial Services, who financed the work. The vessel was moved to toronto, but appears to have not been sold.

I have been told that the vessel may have been moved to reduce the cost of maintaining her. Certainly fresh watter will be easier on the hull.As well electricty costs were cited – As the ship must be heated to keep condensation from forming and rotting the steal hull from the inside.

if you want to buy her, 12 million will do. details at tallship4sale.com. 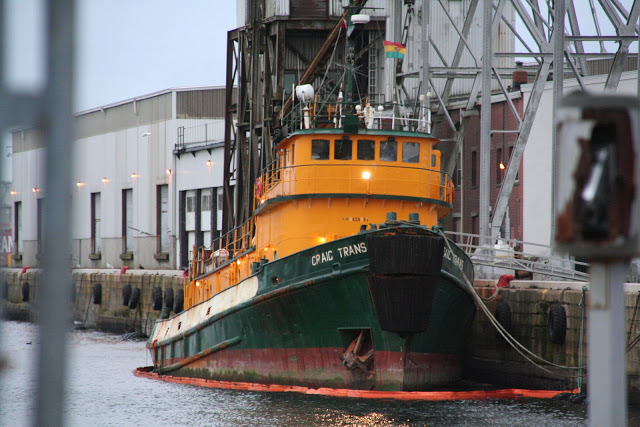 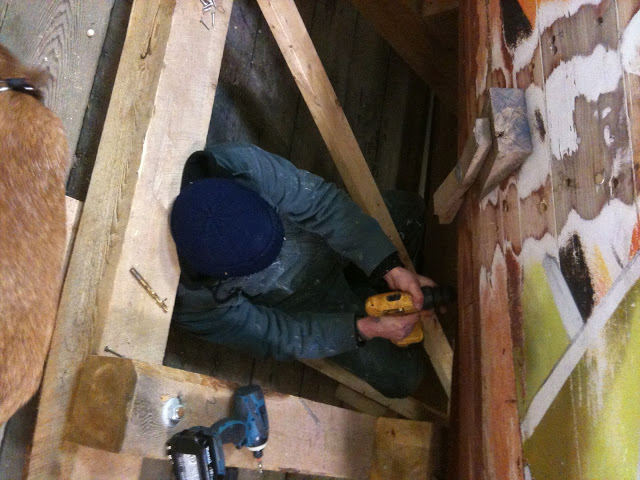 Work Continues on the Dorothea. Now pulling planks that are out, into the ribs. Chips in the hull are also being epoxyied back into place.

The wedges are under a member which is bolted through the hull to pull everything in tight. The Planks are then screwed down tight into the ribs.

Pilotage ops resumed this morning, as weather improved. Kiel Express and Atlantic Cartier, tied up at fairview, Don Juan left autoport, sanderling tied up, and Kometic Anchored for bunkers (above).

HMCS Athabaskan left Port Weller last night, crossed Lake Ontario today, and is now in the Saint Lawrence seaway. Athabaskan sailed to Port Weller for a scheduled work interval when the seaway opened in march, but the refit ran long, and she must now be towed to Halifax before the seaway closes inland of Montreal, Dec 31 for the winter.

The Tugs Ocean Delta (forward) and Andre H (Aft) have the tow. If Andre H Looks familier, its because she lived in Halifax for a number of years as Point Valiant at ECTug. They have a Halifax ETA on the 31st.