Construction is progressing on Atlantic Container Line’s new G4 vessels, which will be the largest RORO/Containerships in the world. The G4 vessels will replace ACL’s existing fleet of G3’s operating in the company’s transatlantic service.

When the construction of the G‐4’s began in 2013, ACL’s parent company, the Grimaldi Group, decided that ACL’s employees would hold a contest to name the new vessels. Over 5,000 name proposals were received. Each ACL country manager and department manager picked his/her favorite 25 sets of 5 names. The most frequently selected 25 name sets were submitted to Grimaldi Group Management in Italy, who chose the winner.
The new G4 vessels will be bigger, faster, greener and more efficient than their predecessors. The G4’s will have a container capacity of 3,800 TEUs plus 28,900 square meters of RORO space, with a car capacity of 1307 vehicles. The new ships will continue to employ cell‐guides on deck, a feature that will allow ACL to extend its enviable record of never losing a container at sea in over 30 years. The first ACL G4 will enter service next summer, followed every two months by a sister vessel until the entire ACL fleet is replaced.

The greek ferry Blue Star Ithaki, will be the replacement for the Princess of Acadia. The federal Government previously announced that the Ferry would be replaced, and Greek media are reporting that the ferry has been sold and will be sailing for Canada, having completed her last Greek trip October 26th.

Built in Korea, she was delivered in 2002. She can carry 1500 passengers, and has few cabins due to the short runs in Greece. Shipfax reports she is due for 4 months of work (and presumably interior renovations) at Pier 9, before going into service.

She Evidently can Take heavy Weather:

The Princess of Acadia is currently at the shipyard in Mechins PQ for Bow Thruster repairs.

UpDate:
The Honourable Lisa Raitt, Minister of Transport and the Honourable Diane Finley, Minister of Public Works and Government Services, today announced that the Government of Canada has entered into an agreement for the purchase of a ferry vessel to replace the MV Princess of Acadia, which serves the Saint John, New Brunswick to Digby, Nova Scotia ferry route.
A purchase agreement was signed on October 10, 2014 to acquire the MV Blue Star Ithaki from a private ferry operator located in Greece at a cost of approximately $31 million EURO ($44.6 million CAN).
On November 27, 2013, the Government of Canada issued a Public Notice for the planned purchase of an existing ferry on buyandsell.gc.ca. Following an extensive evaluation process, which involved identifying and assessing the suitability of candidate vessels from all over the world, including Canada, the MV Blue Star Ithaki was selected as representing the best value for Canadians and having the capacity to meet the operational requirements of the Saint John-Digby ferry service. The vessel’s introduction into service is expected in 2015.
Upon arrival of the vessel in Canada, modifications will need to be made for the vessel to meet Canadian safety regulations and compatibility with existing shore-based infrastructure and operation in the Bay of Fundy. 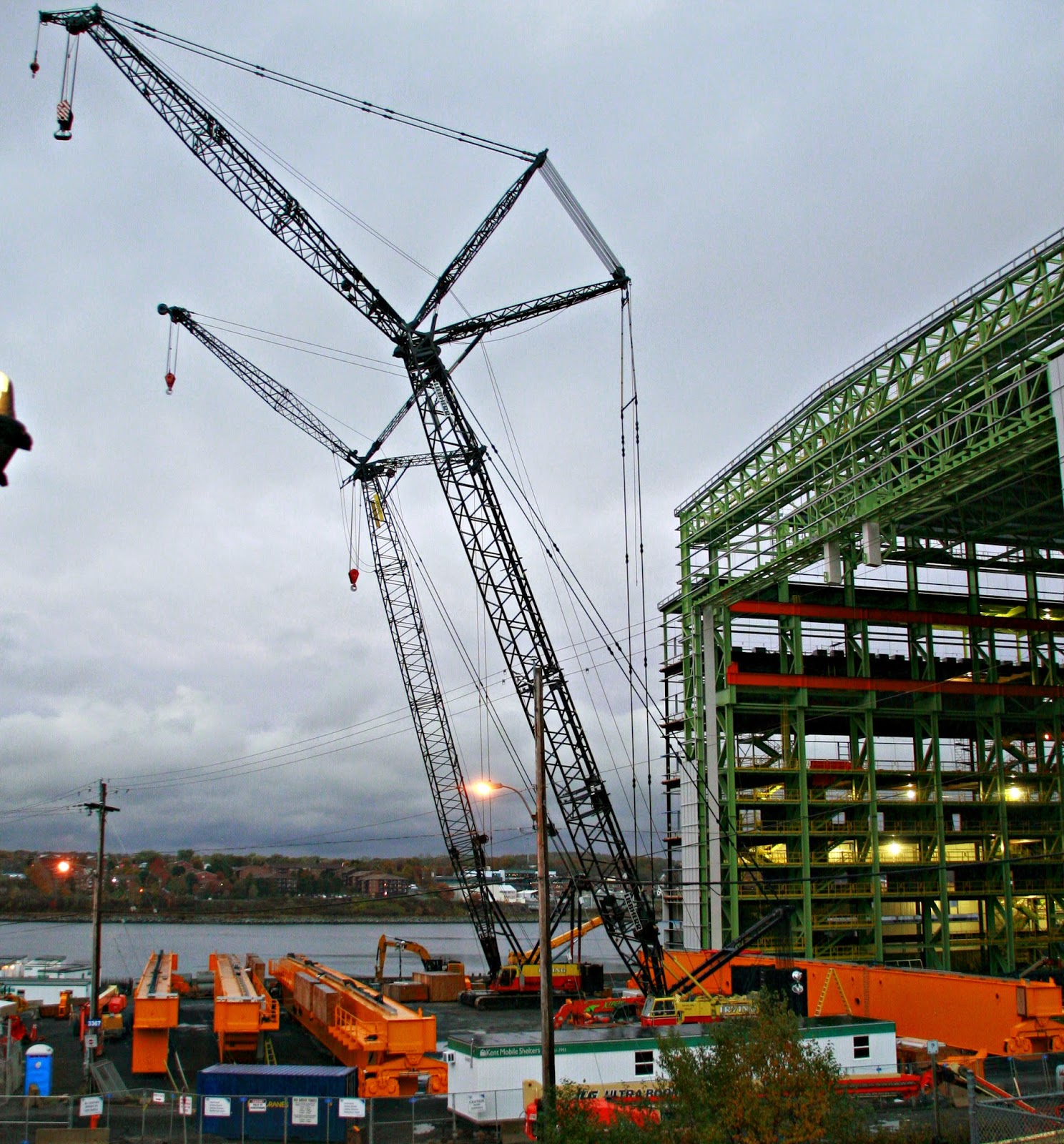 Irving has two of their largest cranes, A
Liebherr – LR1400 440 ton in the foreground, and a MANITOWOC – M-2250 300 ton, to lift the assembled cranes and put them into place. The overhead cranes themselves span the width of the ultra hall and are 200ton capacity each. 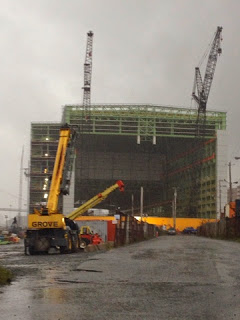 The tanker Atlantic Muse tied up along side the Travelstern and began what appears to be a transfer operation. We have seen 2 similar transfers occur with asphalt tanker arriving, and transferring a portion of its cargo to a smaller vessel.

Atlantic Muse appears to have arrived from the UAE via the Panama Canal. Travelstern is owned by the Woodward group of Newfoundland, and is used to re-supply northern communities. She is also under contract to Valero, and is a frequent visitor to the Ultramar docks.
Photo to follow

This blog started in 2008, a month or 2 after I moved to Halifax from Ottawa.
I attended remembrance day ceremonies at the Monument, I have taken numerous tours of Parliament; heck we used to park behind the library on weekends when we went downtown for something.  I know yesterdays crime scene well.

The whole thing unfolded in a very calm Canadian way. People were calm, and followed instructions. A Mountie got his man, and Parliament sat today, Honoring one hero’s actions and another’s loss.

we feel anger when we loose a soldier in a training accident – its needless. Its tragic and noble when we loose one operating over seas – they knew the risks and went anyway. I don’t have words for loosing a soldier standing watch over a monument to those who fell for our freedom. 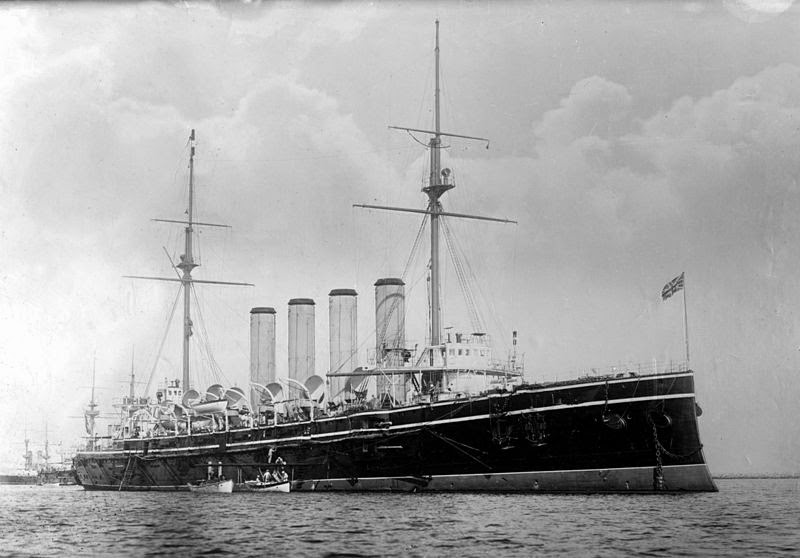 An anchor, believed to have belonged to His Majesty’s Canadian Ship (HMCS)Niobe, has been unearthed at HMC Dockyard in Halifax. HMCS Niobe was the first Canadian warship to enter Canada’s territorial waters, on October 21, 1910, a landmark event in the beginnings of the Naval Service of Canada.
As fate would have it, the discovery of the roughly 900-kilo (2000-pound) anchor was made just days before the commemoration of Niobe Day, which will from now on, be celebrated annually by the Royal Canadian Navy (RCN) on the 21st day of October. An excavation crew working at HMC Dockyard recovered an anchor and chain buried beneath a demolition site on the morning of October 14. The anchor has been inspected, assessed against relevant documents and photographs, and is now believed to be that of HMCS Niobe. 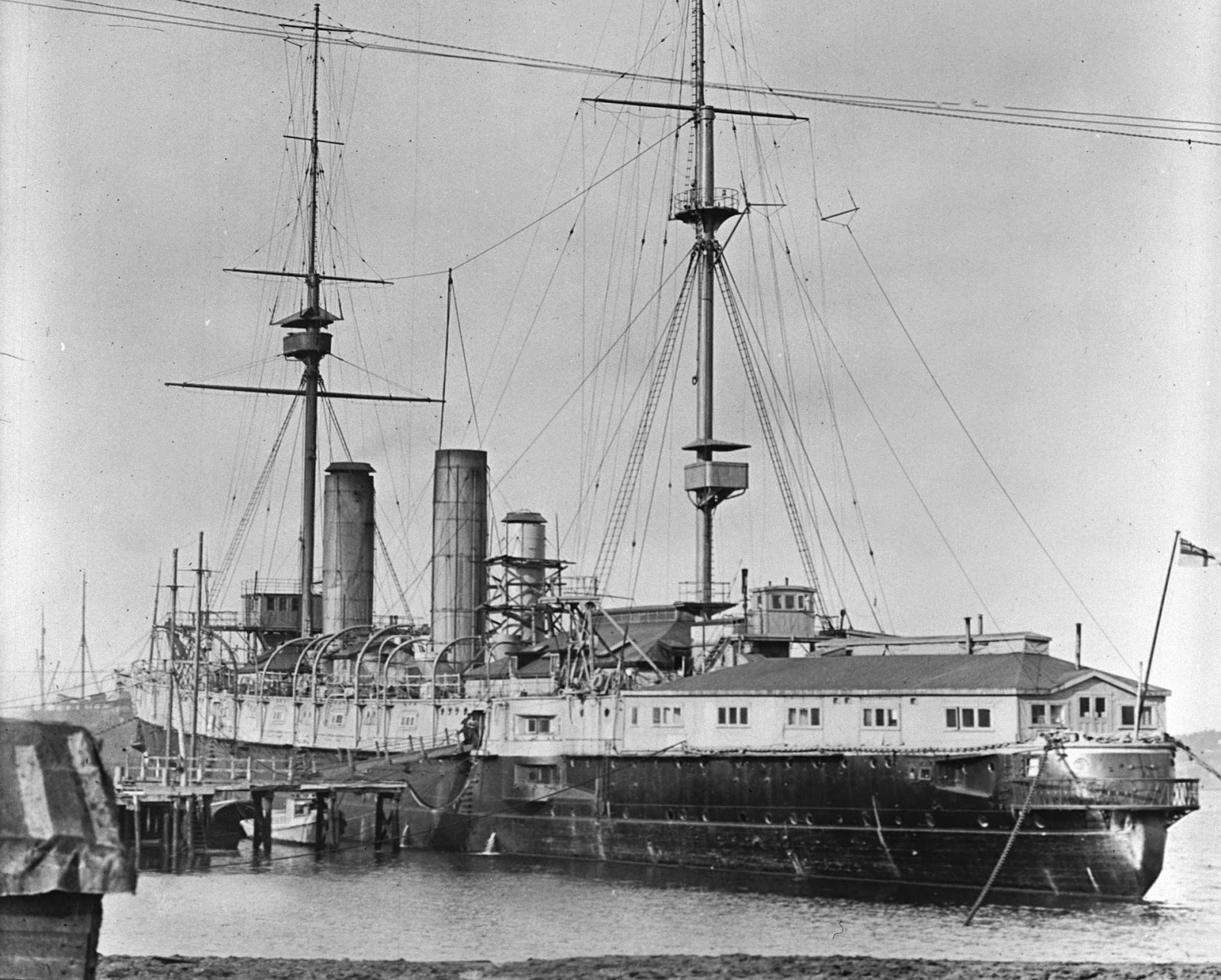 The anchor was unearthed at former Jetty 4, where Building D-19, a Second World War dockside warehouse and one of the first structures at HMC Dockyard, once stood and is now being demolished.
The position of the anchor speaks to a particular time and function. The direction of the chain links is consistent with the position of the Niobe’s bow when employed as a depot ship and the size is consistent with an estimated size of the links of the Niobe’s anchor in a post-Halifax Explosion photo.
While a list of stores left behind by the Royal Navy is not available, no vessels in the newly formed Royal Canadian Navy were large enough for this size anchor except for the Niobe, or possibly the Rainbow (based in Esquimalt, BC). Additionally there would have been no other use for a heavy chain and anchor at the discovery site, except to permanently moor a large vessel such as Niobe.
After she was paid off, Niobe functioned as a depot ship from July, 1915 until 1920 moored in Halifax Harbour. The Halifax Explosion on December 6, 1917, pulled the ship’s concrete embedded anchor from the harbour floor and dragged the ship. Once re-secured to Jetty 4, additional anchors were put in place including one to the shore from the stem and one from the stern. The anchor that has been discovered is believed to be one of these three bow anchors that were used to keep Niobe in place
The dimensions of the roughly 900-kilo (2000-pound) anchor are, 4 metres (13 feet) from crown to head, 4.1 metres (13.5 feet) across the stock, and 3.35 metres (11 feet) from bill to bill of the flukes. Additionally, each link of the anchor’s chain is 51 centimetres (20 inches) by 28 centimetres (11 inches) and weighs approximately 34 kilos (75 pounds) 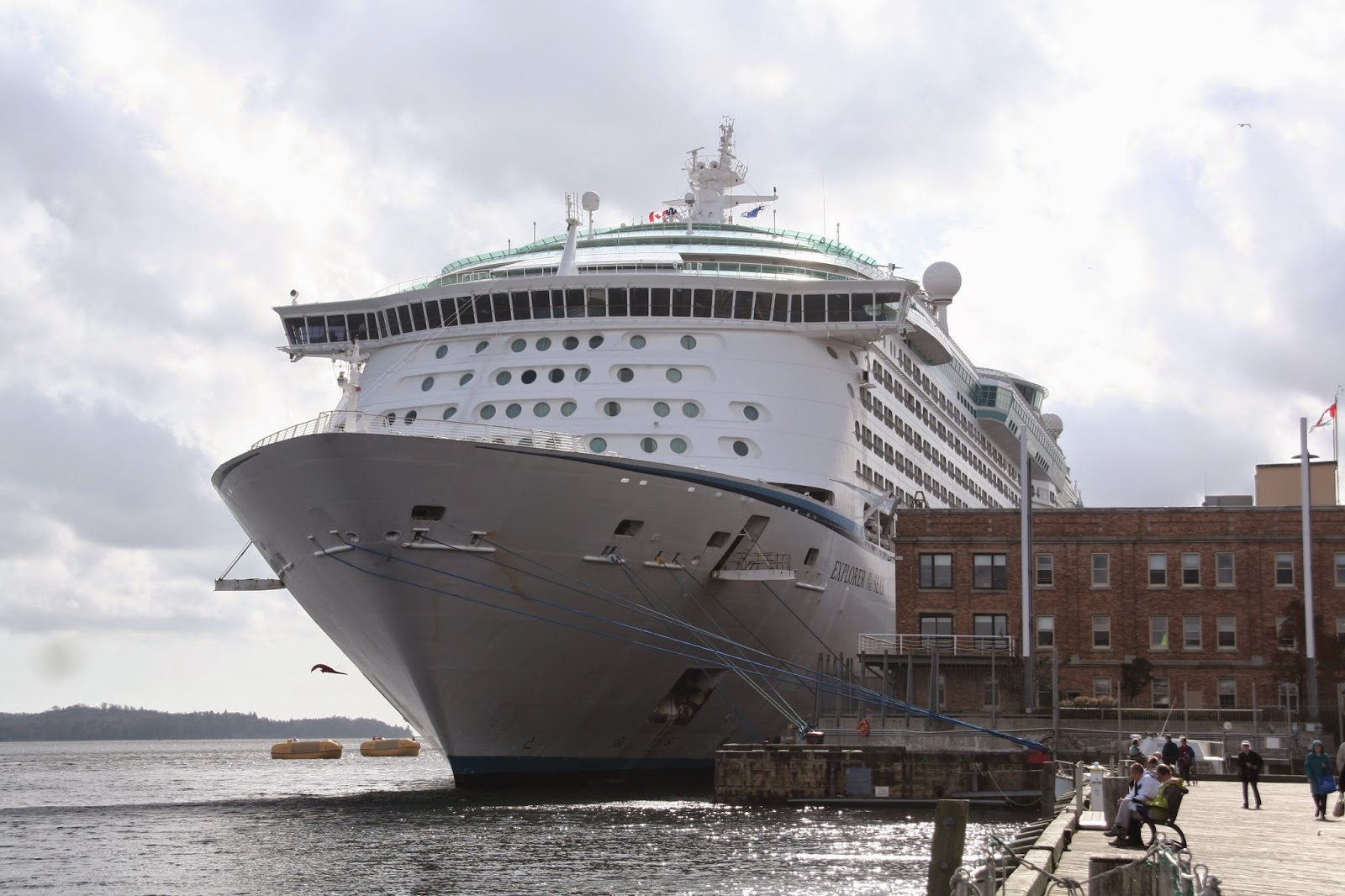 Todays arrival of Explorer of the seas was the result of a weather related change in schedule. I had assumed this was the case when i discovered her arrival listed, but not appearing on the schedule. This led me to believe a trip to Newfoundland was adjusted due to weather.

Nope, todays arrival from New York brings passengers who were expecting to disembark in Bermuda. Bermudian Authorities requested the ship not dock there due to the aftermath of Hurricane Gonzolo, so the trip was re-routed to Halifax and Saint John.

Suffice it to say, the voyage is getting a chilly reception. 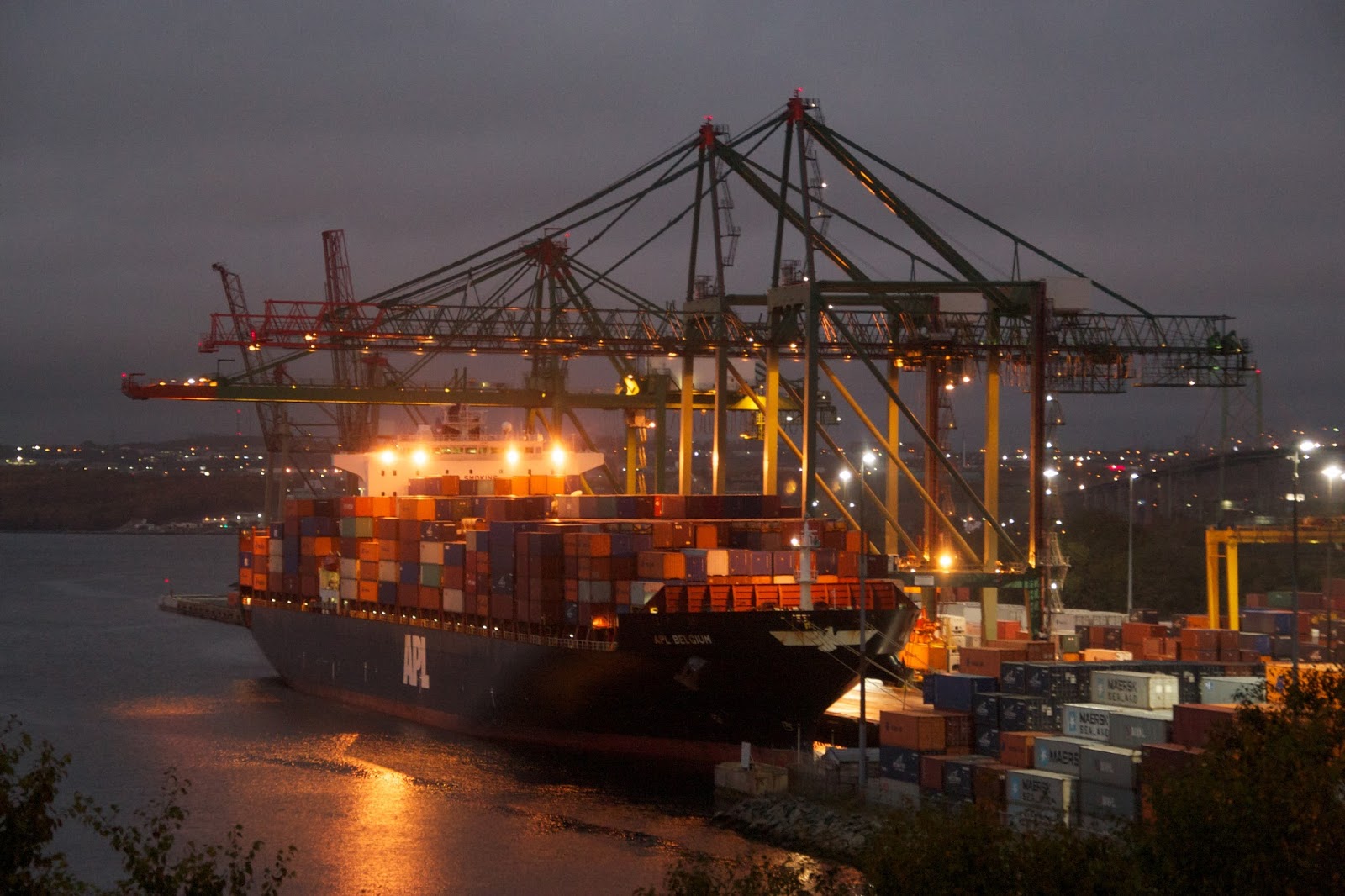 From Friday Night, APL Belgium tied up in the opposite direction as normal. This makes for better photos, particularly at night. 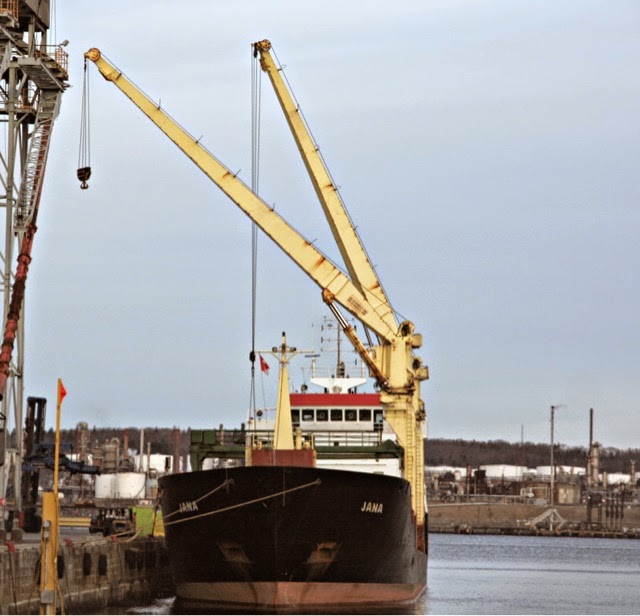 (HALIFAX, Nova Scotia) — International Transport Workers Federation inspector Gerard Bradbury has reported another vessel and crew stranded in the port of Argentia in Newfoundland and Labrador.

Bradbury said the crew of the Jana comprised of three Russians and eight Ukrainians contacted him stating they had not been paid since June of this year with outstanding wages topping $120,000 for current and former crew. The Jana has provisions for less than a month and fuel for less than 10 days.

“Contact has been made with the current owners in Germany,” said Bradbury. “We are awaiting word for the plan for the ship, but something has to be done as this crew doesn’t have many options.”

ITF Canadian coordinator Peter Lahay has also been in touch with a liquidation company with some interest in the vessel. They hope that the ship can be sold before winter sets in.

It was around the same time last year that the vessel Navi Wind ran into problems with safety and was blown back into the port of Argentia where it was discovered the crew were owed more than $100,000 in back wages and also had a long list of safety issues that the ship was detained on. 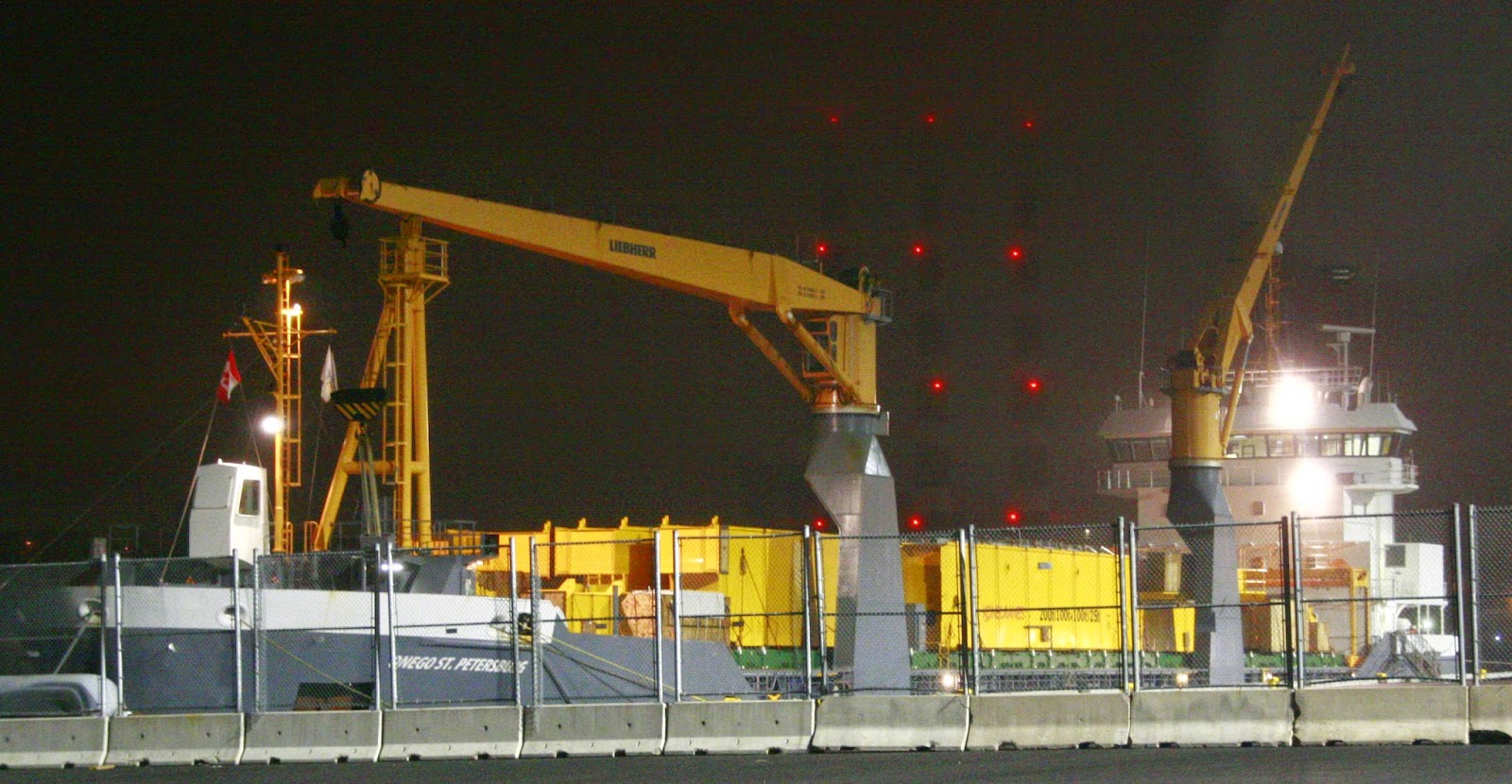 The general cargo vessel Onego St. Petersburg arrived tonight from Houston, at the new pier 9c. She is the first vessel to do so and temporary fencing was erected around the pier, as the permanent fence has not yet been installed.
She is delivering Kone 100t overhead cranes for the shipyard