(Above) Task Group at Anchor

HMCS Kingston, Fredericton, and Windsor were in the dockyard. – the 6 vessels are taking part in a Task Group Exercise

Several warships sailed from Halifax, today, to participate in a Task Group Exercise (TGEX) from Nov. 25 to Dec. 6, 2013. The TGEX is part of NORAD exercise Amalgam Dart which runs from Dec. 3-5, practicing interoperability between the RCN, RCAF, and USAF.  RCN ships participating in the TGEX include HMCS Iroquois, Ville De Quebec, Halifax, Fredericton, Kingston, and Windsor.

Exercises like this TGEX are key for RCN units to maintain operational readiness and deploy on joint operations in a rapid and effective manner. TGEXs strengthen Canada’s ability to work in a multi-national and joint environment on a wide range of potential operations and missions. 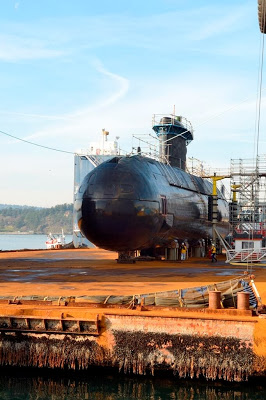 The Times Colonist of Victoria is reporting that HMCS Chicoutimi will enter the water today after completing her refit.

She Departed Halifax in April 2009 for BC for repairs.

UPDATE: Photo Left via RCN – HMCS Chicoutimi rests on a floating dry dock in preparation for return to water, a significant milestone 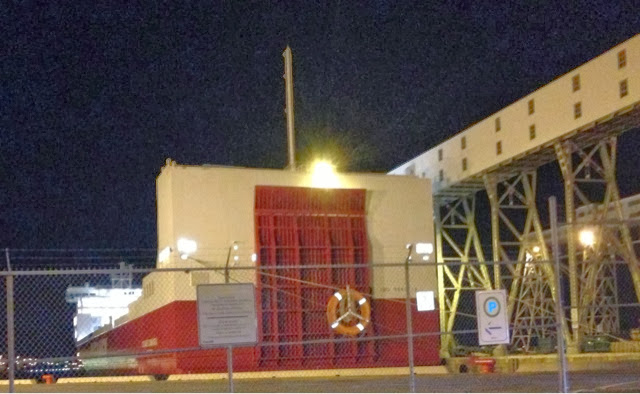 Oceanex’s new vessel pulled in To port yesterday and tied up at pier 25. She is reported to have an issue with one of her propellors. It is unclear if repairs can be made at pier 25 or if she will require the nova dock.

The Connaigra runs the Montreal to St Johns route and passes 2 dry docks large enough to accommodate her Davie shipyard and Group Ocean. 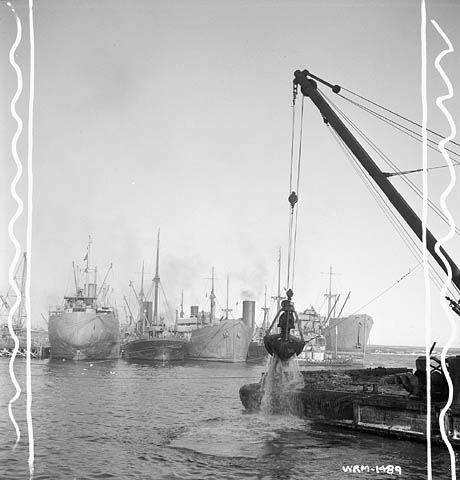 Circa 1942, From the Library and Archives Canada 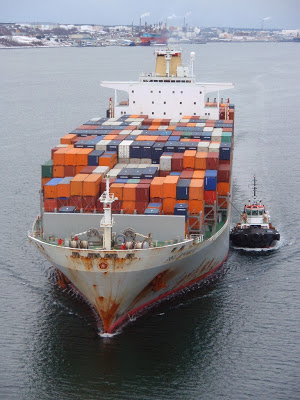 late on Nov4, OOCL Oakland Outbound lost power in the Narrows. An incident was averted thanks to the use of a tethered tug that was able to stear the ship and stop the ship.

Probably the worst case scenario is a ship hitting a bridge. The towers are protected by rocks, so they are likely safe, however most of the large container ships must pass directly in the center of the bridge, and then do so with about 2m to spare – the height of an average doorway.

(Left) You can see on of the tugs tethered to the side of the OOCL vessel. there is another at the rear. This shot is from the MacDonald bridge, and you can see how close the vessel comes.

I posed some questions to Halifax Harbour Bridges, they were very prompt with their responces. Alison from Halifax Harbour bridges Confirmed they Monitor Marine VHF. And also provided the following about this specific Incident

On commercial shipping we primarily deal with Halifax Traffic. In this incident a PAN PAN call was not issued. However, we set up for a PAN PAN situation (standard procedure). We remained in a heightened state of readiness until the ship cleared the bridge and was put at anchor. Our operations centre monitored the passage through our zone using our security cameras (standard procedure) .

HHB routinely conducts drills on emergency procedures internally and in partnership with HRM and the provincial EMO for incidents on, under and around our facilities.

The ship could also ground. This most recently happened near Woodside on 07 June 1992, the Swedish-flag container/roll-on roll-off vessel “CONCERT EXPRESS” was under the conduct of a pilot in Halifax Harbour in dense fog. During a manoeuvre around a vessel at anchor, the “CONCERT EXPRESS” grounded and sustained extensive hull bottom damage.
(Photo Below of Concert Express Aground by IOL thanks to Wave Point Consulting) 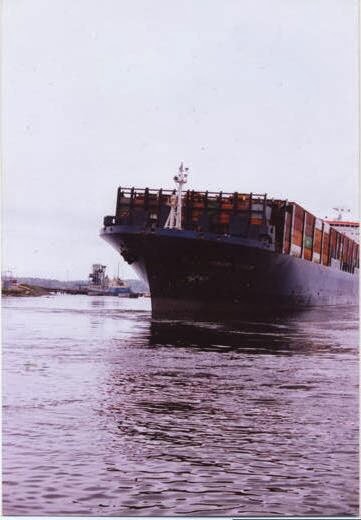 Lets also not forget the possibility of a collision with another vessel – HMCS Preserver had power issues not to long ago and Struck the Nova Dock. 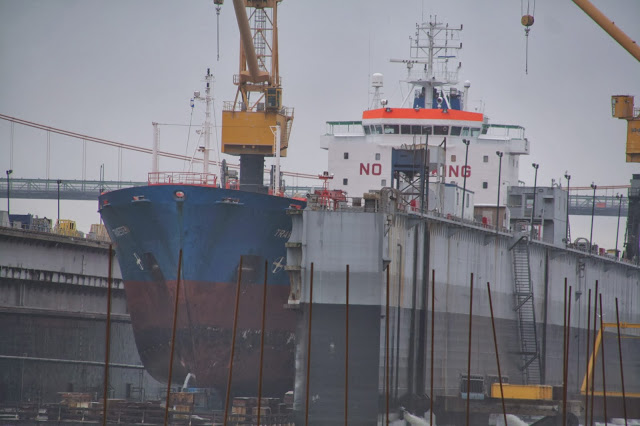 With the Departure last Thursday of the Holiday Island from the Nova Dock, Space was freed up for the Woodward Group Coastal Shipping Ltd tanker Travestern to enter this morning. 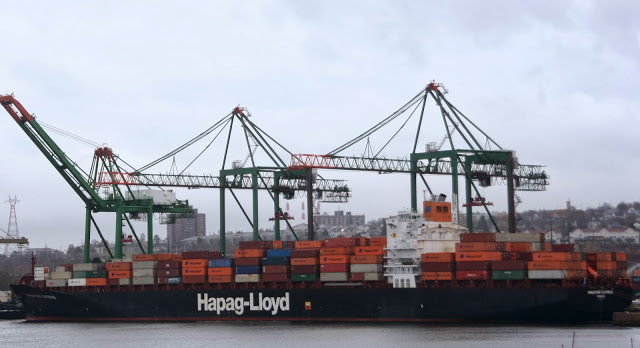 This Morning brought the Maiden Arrival in Halifax of Singapore Express, Now serving on the PAX Service. She is Owned by Costamare Shipping of Greece and is on long term charter to Hapag Llyod.
At 4890TEU, She is a Panamax Vessel, and the same class as Oakland Express and New York Express, Both of which have called on Halifax. 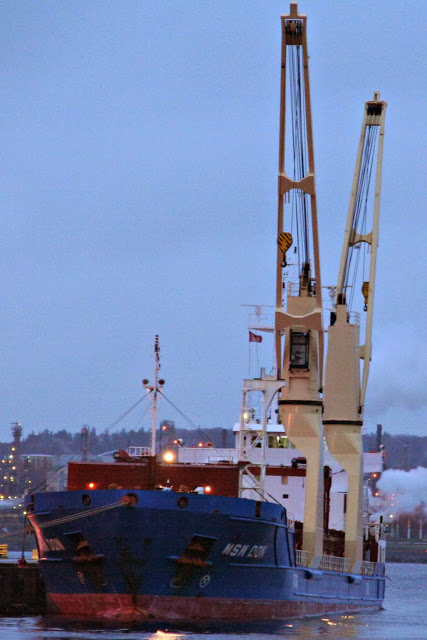 MSM Don Arrived earlier in the week with another load of rails for CN.

Based on photos on Marine traffic, the 2 cranes are a recent edition within the last year, as they are absent in 2011 photos 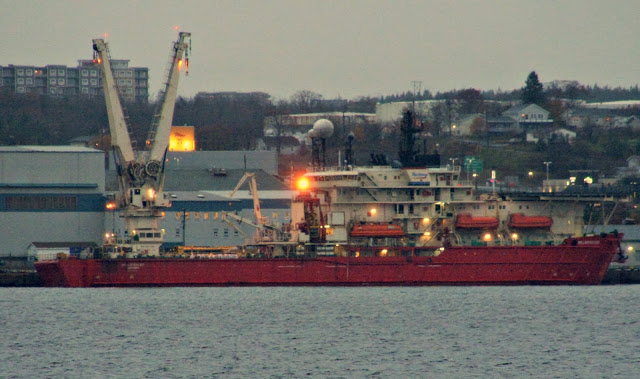 The British Diving Support Vessel Wellservicer made a brief appearance in  Halifax yesterday, spending just under 11 hours tied up at Woodside. She sailed Just before 10pm.
She recently completed work in the Whiterose field off Newfoundland, and Is now  going to be used to perform the following operations on the Sable Venture Pipeline, off the coast of Nova Scotia: