The Coast Guard is reporting that the container ship MSC Kim is adrift off Newfoundland, in the Gulf of Saint Lawrence. The Ship was bound for Montreal, and sailed from Halifax the night of the 5th.

According to Marinetraffic, the ship was making 20kn and then dropped to 1.5kn around 21:50utc on the 6th. The position again updated briefly on the 8th, with the reported speed less then 1kn. Its last reported position almost 48 hours ago was 48°25’24.7″N, 061°48’55.1″W, and the ship was reporting a navigation status of Not Under Command.

The CCGS Terry Fox is breaking ice in Stevenville NL, where the Atlantic Kingfisher is tied up, and will be responding to take the vessel in tow. MSC Kim was built in 2008, and is rated for 4254teu

Update 02/09 22:34 with a more recent position. MSC Kim is drifting eastward towards Newfoundland in the wind. It is still 30nm West South West from the closest shore at Cape Saint George NL.

Atlantic Kingfisher is currently taking fuel from CCGS Terry Fox and is expected to Depart at 2300nl. Towing should begin in the morning. CCGS Jean Goodwill will also be responding.

UPDATE 02/09 2342: Atlantic Kingfisher is off the dock, and proceeding to MSC Kim with CCGS Terry Fox. MSC Kim is drifting east at 1.2kn

UPDATE 02/10 0700: Looks like Atlantic kingfisher has arrived at the MSC Kim. Overnight the MSC Kim drifted another 8nm east.

UPDATE 22:19: the tow is progressing towards Sydney, with an ETA of 1am.

Its also a good time to better understand the response. Its not known at this time when the MSC Kim called for assistance, but it certainly should have reported to MCTS that it was not under command. the CCGS Terry Fox was on icebreaking duty in the Straights of Belle Isle, specifically on the the Saint-Barb to Blanc Sablon Ferry route. On the 5th, terry fox departed for Corner Brook,and spent most of the 6th breaking ice in Corner Brook, before returning to the ferry run on the 7th. Terry Fox then Sailed for Stephenville the Evening of the 8th, arriving the afternoon of the 9th, which is where we picked up the story.

Why does this time line matter – in 2014, the John 1 went aground after refusing a tow from the Coast Guard before the situation got worse. A last minute tow attempt by the Earl Grey failed, and the ship went aground. it was subsequently declared a constructive total loss and recycled.

The MSC Kim lost power in open water, and calm conditions. That doesn’t make the situation an emergency, however the potential for the situation to go bad exists. Even if a commercial tow is desired, there is no reason not to have a Coast Guard ship capable of taking a tow on scene in case situation changes, or conditions get worse. If you have time, you have options.

When a fire alarm is triggered, the fire department begins moving sufficient resources to deal with a fire closer to the site of the alarm in case they are needed. In many cases they get returned on route. but every now and then they are needed, and the improved proximity helps quickly bring the situation under control.

For all the talk of world class response, and the oceans protection plan, once again we have a case where the Coast Guard has failed to take positive control of a situation, to ensure it doesn’t go bad. Once again, we got lucky that a suitable commercial towing vessel was in a convenient place to respond, and the weather held. But if the Coast Guard wants to convince Canadians they have control, they need to step in and be in a position to respond.

UPDATE 02/11 0748: the tow is outside Sydney now. it looks like they might have chosen a path to avoid some ice, and probably were waiting for daylight to enter the Harbour.

The Photo doesnt do it Justice, but Atlantic Osprey is completely dwarfed by the new Maersk Suppliers, both of which are here as part of the Sable offshore decommissioning. Maersk Maker has been in Halifax for a while, and was joined by Maersk Mobiliser. Mobiliser has been to Halifax before, as one of its first jobs was the the tow of the fire damaged Yantain express.

Atlantic Kestrel tied up at Pier 9 earlier this week. The ship, buit in singapore in 2012 normally works off Newfoundland, but is likely here as part of the Sable island an Deep Panuke Offshore gas Decomisioning work.

The Canadian International Trade Tribunal (CITT) has responded to a complaint by Heiltsuk Horizon Maritime Services, recommending a review of a key performance requirement in the process to procure two emergency towing vessels for the protection of Canada’s West Coast.

As a bid participant, Heiltsuk Horizon – a partnership of majority partner Heiltsuk Nation of Bella Bella, British Columbia and Horizon Maritime Services Limited, registered a complaint last August that the winning supplier did not meet important safety requirements of the tender process.

I wrote about the issues with the towing contract in this Chronicle Herald Piece when the Atlantic Towing vessels headed west. Heiltsuk Horizon has not publicly disclosed the vessels they bid on the project, though based on other charters they were likely tidewater tugs.

In a letter to Heiltsuk Horizon, the Tribunal recommends the Department of Public Works and Government Services Canada reevaluate the “bollard pull” (towing power) of the vessels in all bids received and also awards Heiltsuk Horizon costs incurred in submitting the complaint.

“The contract was awarded in the absence of the required proof that the vessels met the mandated towing power,” said Chief Operating Officer Steven Widmeyer, Horizon Maritime Services Limited.  “We hope this recommendation leads to a reconsideration of our Heiltsuk Horizon vessels, which are in accordance with recommendations of the 2018 Emergency Towing Vessel Needs Assessment by the Clear Seas Center for Responsible Marine Shipping.”

The CITT letter recommends no further expenditures be made on the awarded contract until a review is complete and also lays out potential actions to be taken post-review, including cancellation of the existing contract.

The Heiltsuk Nation, currently in reconciliation discussions with Canada, teamed up with Horizon Maritime to form Heiltsuk Horizon, following the devastating Nathan E. Stewart oil spill in its territory in October 2016. 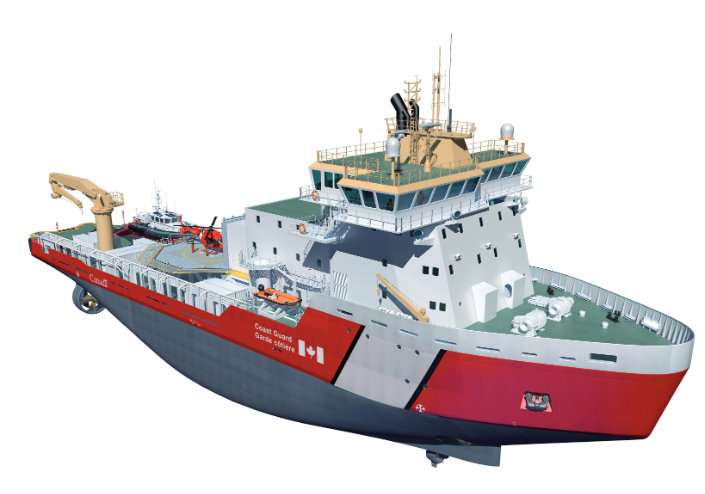 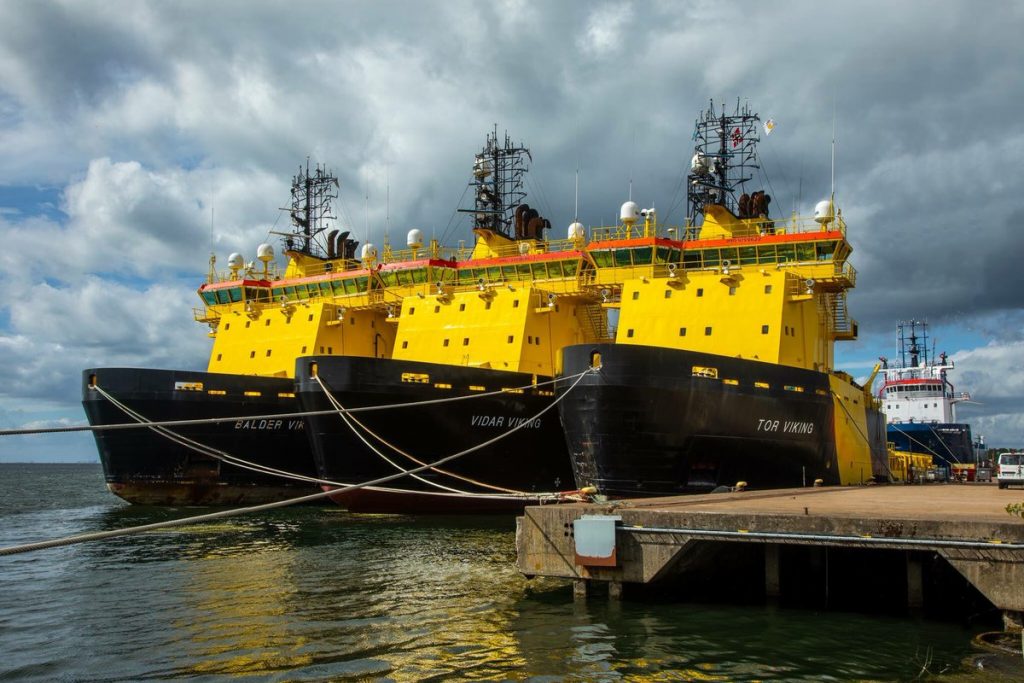 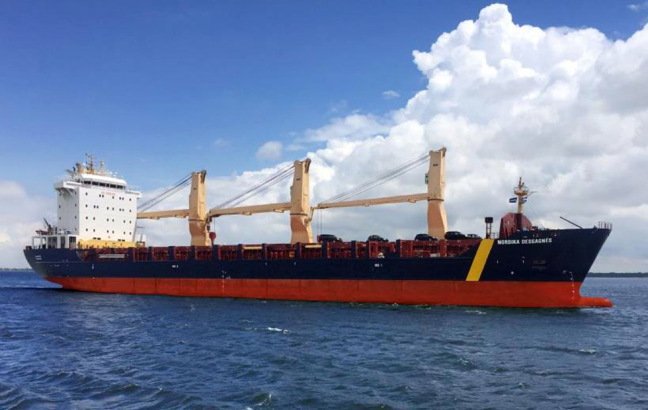 The Nordika Desgagnés has lost steering off cape breton. She Sailed from Montreal bound for Sydney Austrailia. CCGS Sir Wilfred Grenfell is on scene and A tug has been dispatched by the vessel owner to tow the Nordika Desgagnes to Port.

(Above)  current location via Marine Traffic. (Below) CCGS On Scene Photo. 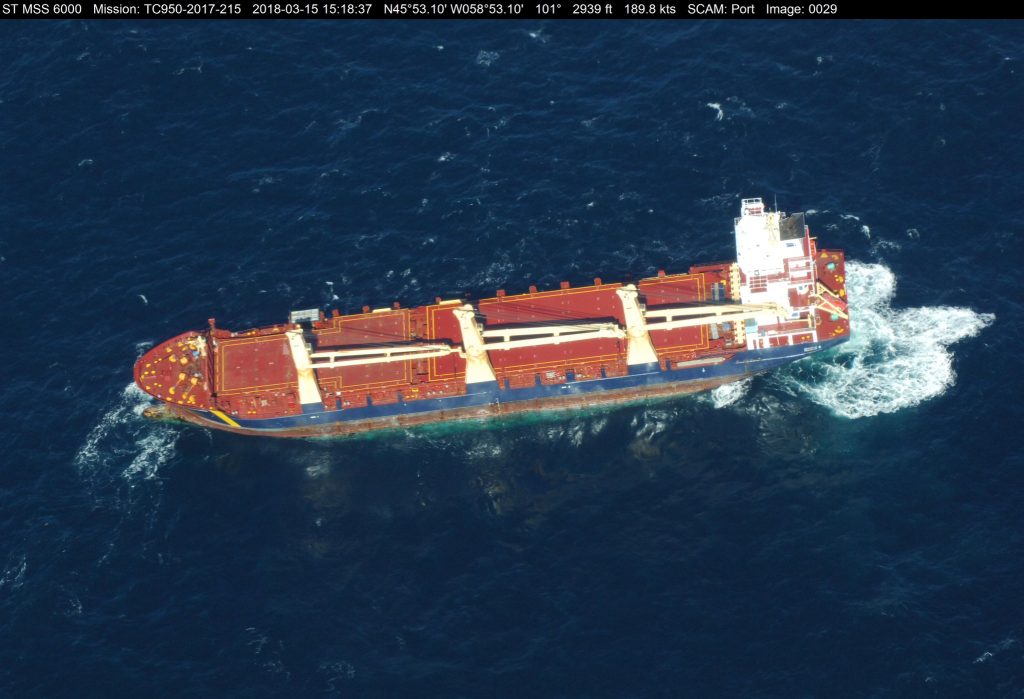 This Story will be continually be updated at http://blog.halifaxshippingnews.ca/2018/03/breakingnordika-desgagnes-looses-steering-off-cape-breton.html

UPDATE 03/16 12:00:
the ship is apparently facing some weather, and is still in roughly the same area of the Ocean.

The M/V Nordika Desgagnés, a multi-purpose cargo ship built in 2010. With a length of143meters, she has a dead weight of17,000tons and a carrying capacity of nearly 20,000cubic meters excluding the main deck, at a draft of 9.70meters. She is equipped with two cranes of 250tons capacity each which can be combined to lift a total of 500tons,has an additional80-ton crane, holds an ice class equivalent to Lloyd’s 1A and can reach a speed of 15knots. a full spec sheet is available (PDF)

UPDATE 13:14:
Reports are that she is now bound for Port Hawksbury under tow by supply vessel Atlantic Tern 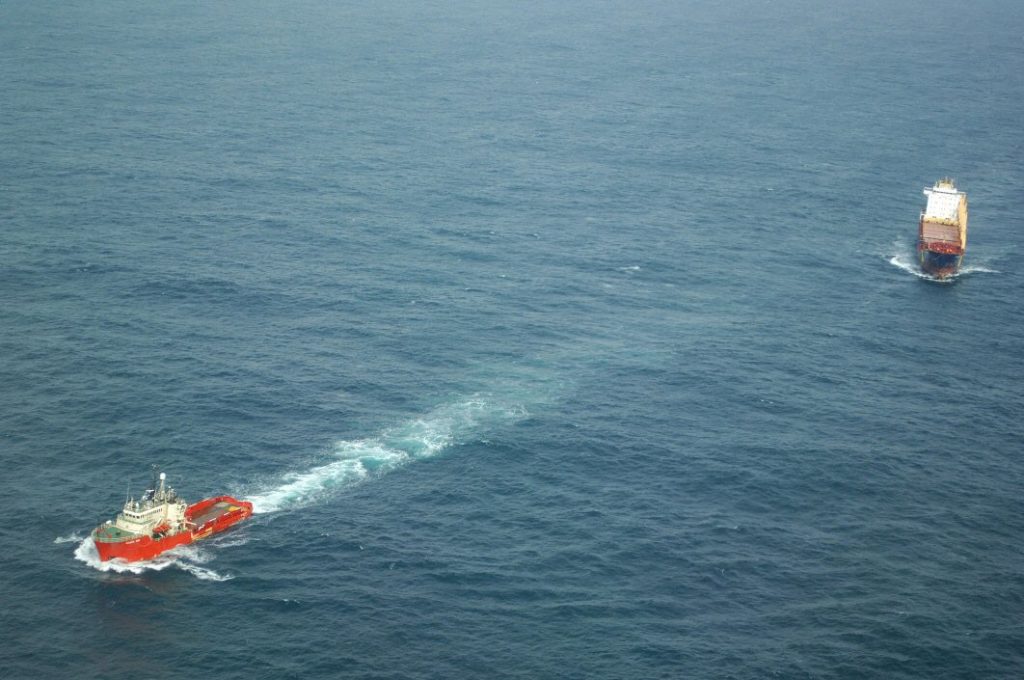 Final Update: the Nordika Desgagnés has been towed to Port Hawksbury, reportedly with Hull damage after one of her cranes came loose. the Tug, Atlantic Tern tied up in Halifax over the weekend. 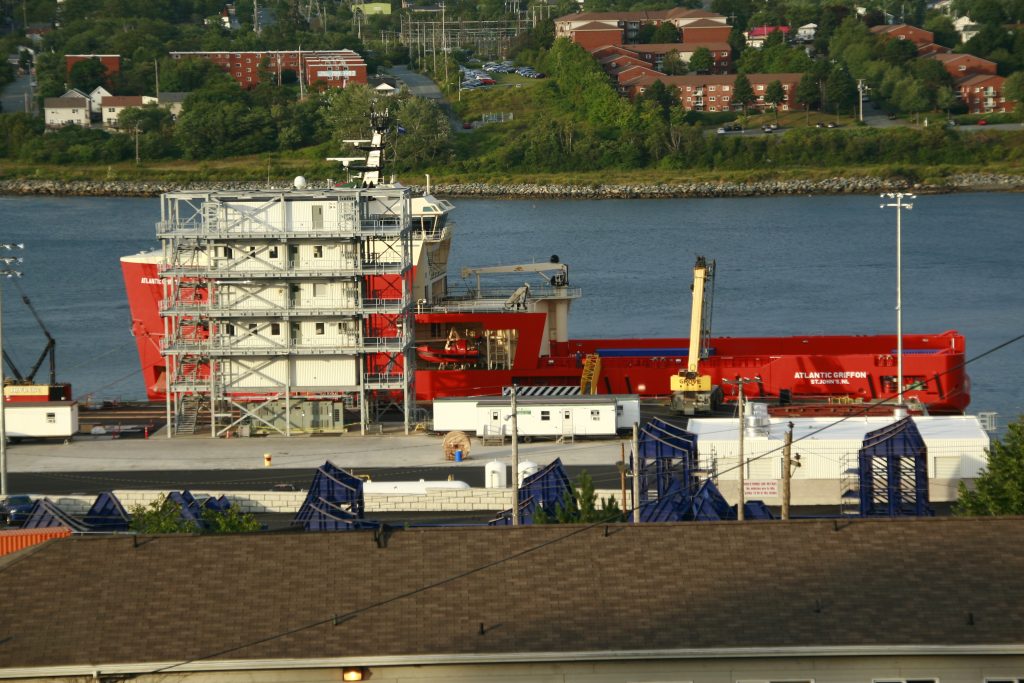 Atlantic Towing’s new PSV’s have thier tops installed. There appears to be some welding and painting going on. 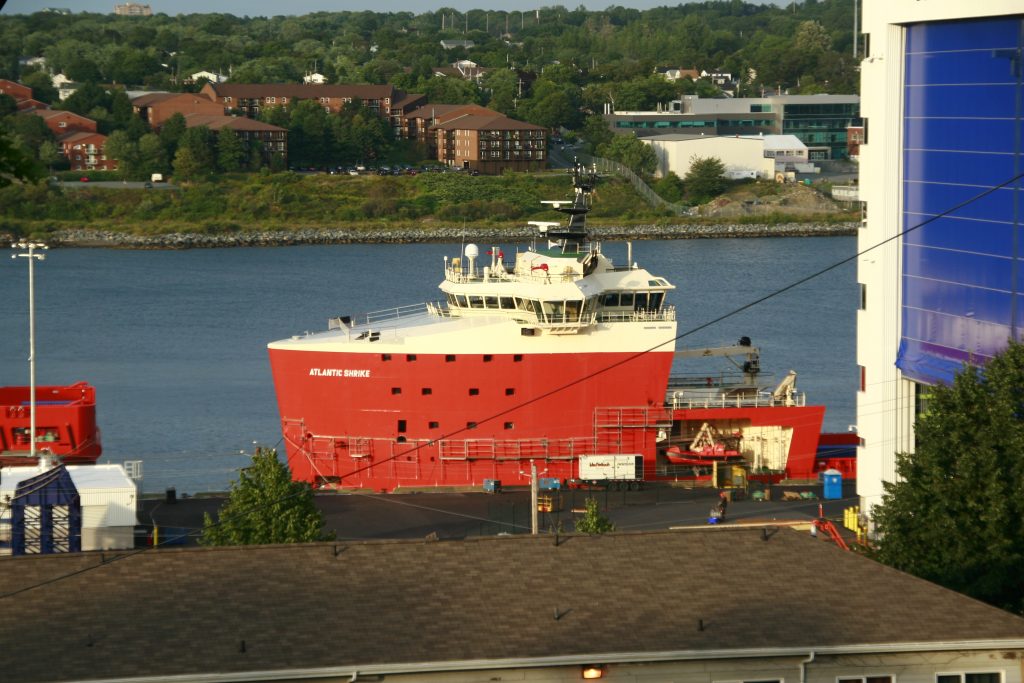 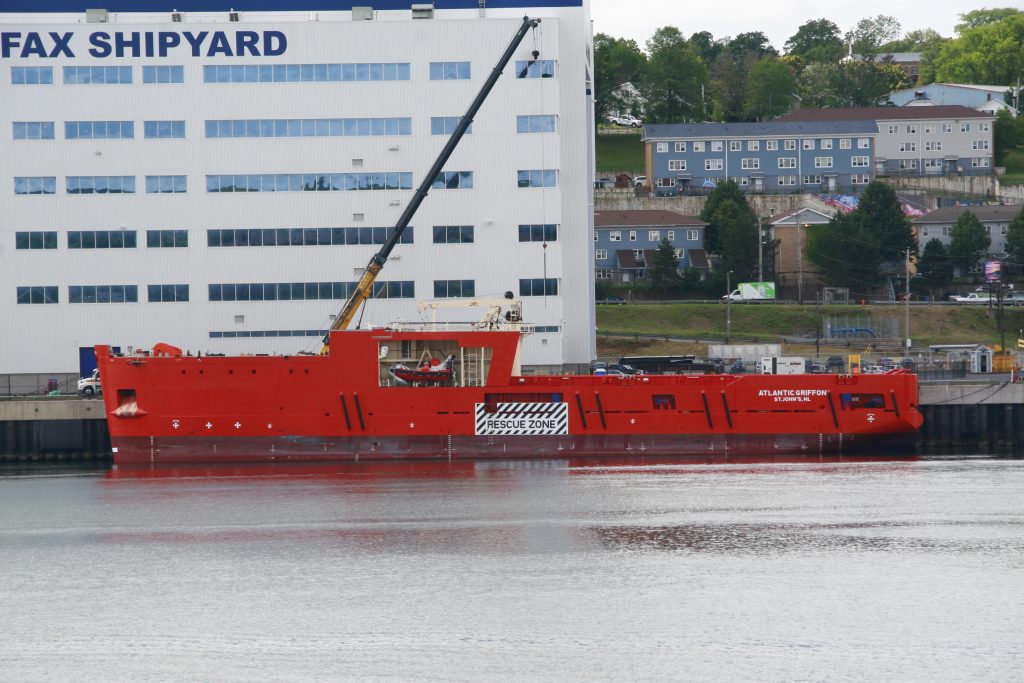 yesterday brought the arrival of the Hull of Atlantic Griffon to Pier 6, Undertow of the tug Fairplay 31. Her Topsides arrived earlier this month aboard the Happy Sky, and they will be re-assembled 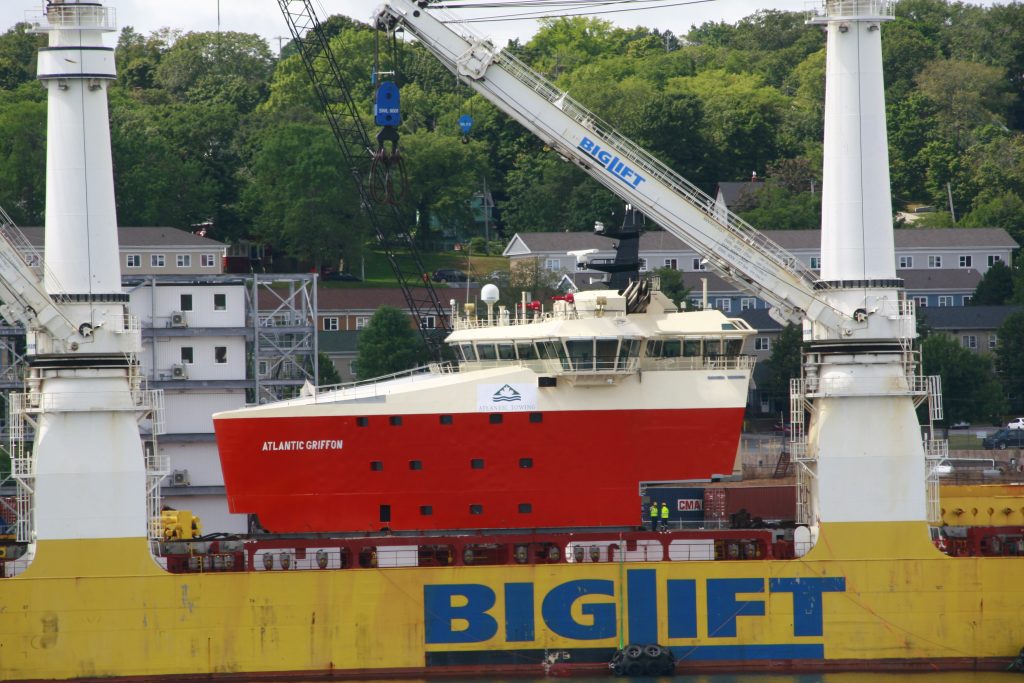 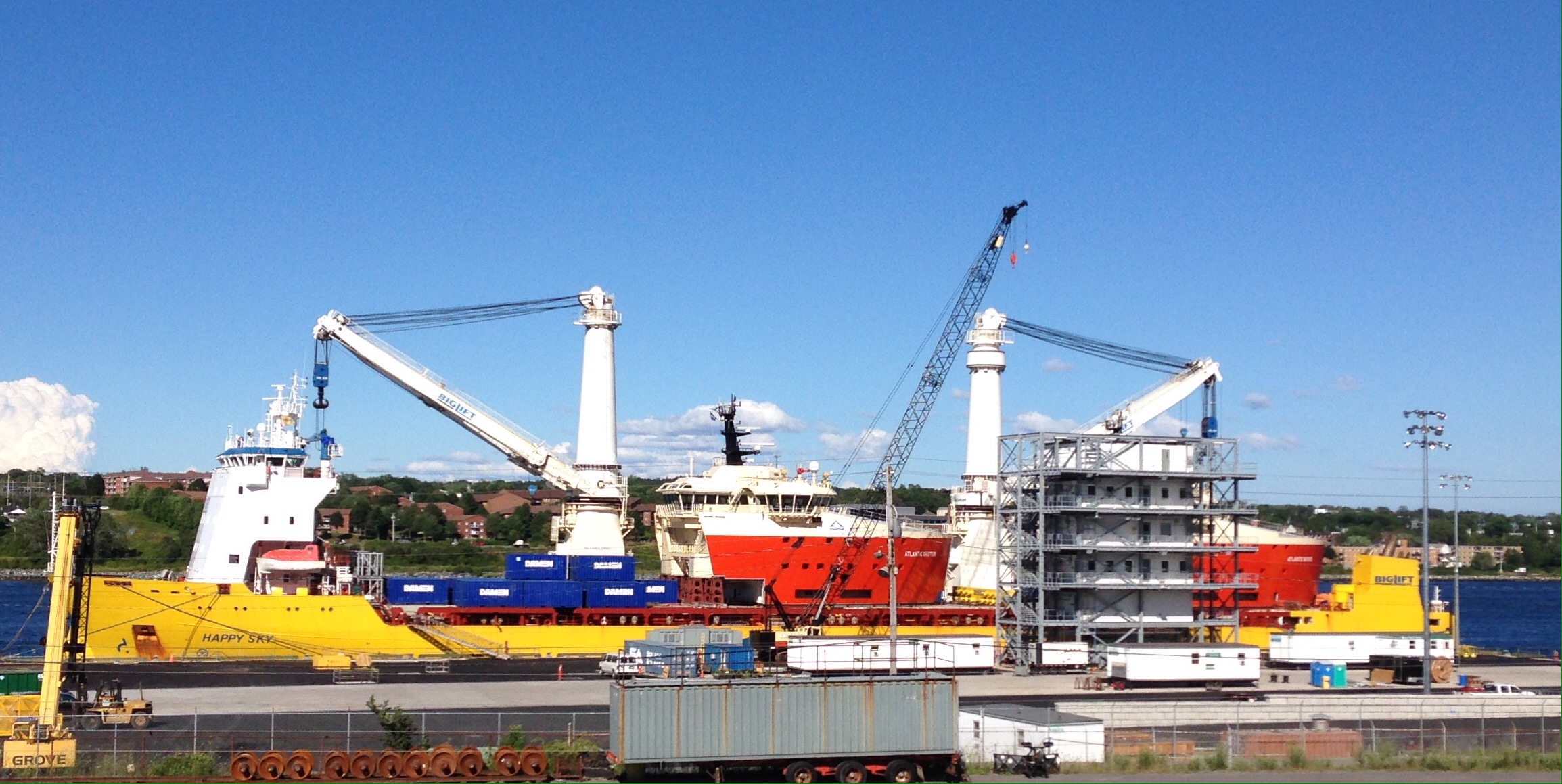 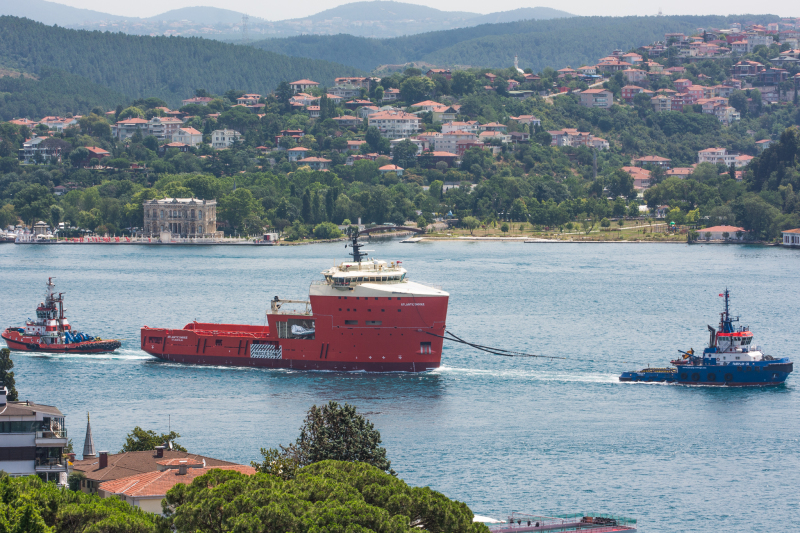 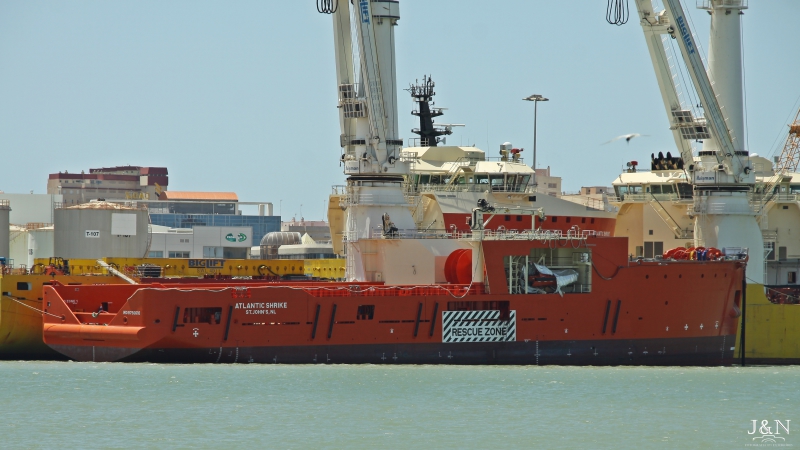