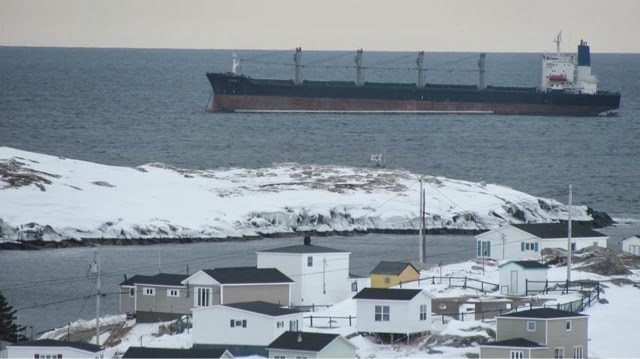 The 600′ bulk carrier M/V John 1 went aground ~1.6KM from the community of Rose Blanche Newfoundland this afternoon just after 1330. 23 crew were evacuated by helicopter after issue ing a distress call.

One assumes they will attemp to tow the vessel off the rocks next high tide. The forcast looks stable though winds are expected to pick up Monday morning.
DFO reports the John 1 lost power on Friday and was drifting parallel to the coast. CCGS Earl Grey was dispatched and tug Ryan Leet was hired from mulgrave to assist and was due Saturday. Reports are that the crew stated there was water in the engine room, which could explain the power loss.
Saturday morning wind changes put the ship in danger of running aground. Earl Grey was unable to establish a tow, and the ship grounded. A helicopter was dispatched from gander to pick up the crew. The CCGS Pierre Radison is also due on scene. 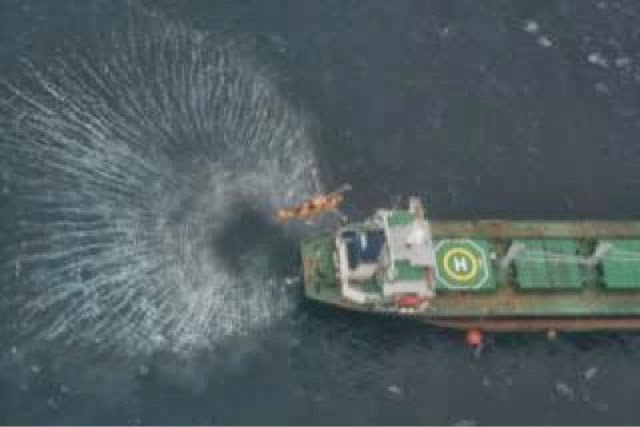 John 1 was built in 1991 and is registered in panama. She was due in Montreal having sailed from Las Palmas. The port of Montreal listed the grain elevator as her birth, so we can assume she was due to load grain for export, and is currently unloaded.
Photo top  by Mary Hardy via Facebook http://t.co/APtxPr5L5u  below JRCC via Twitter
Additional photos below by Rolland Kettle 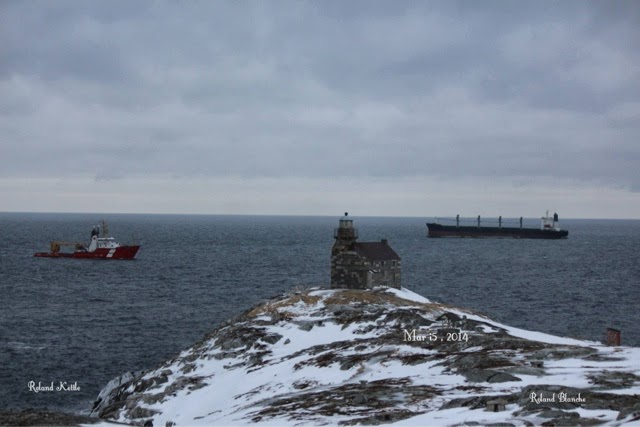 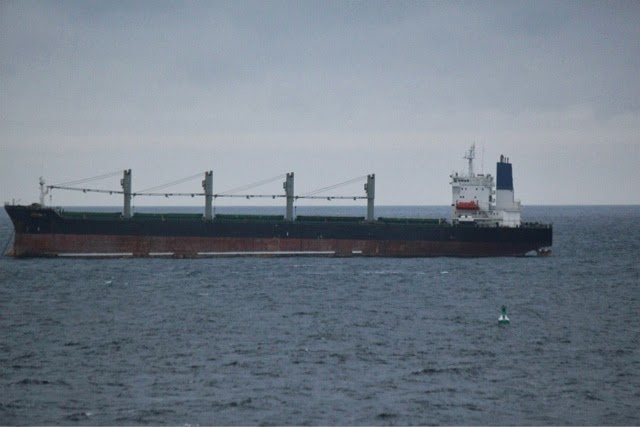 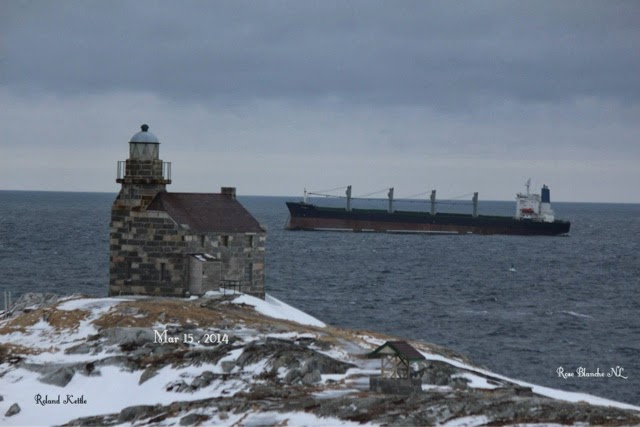 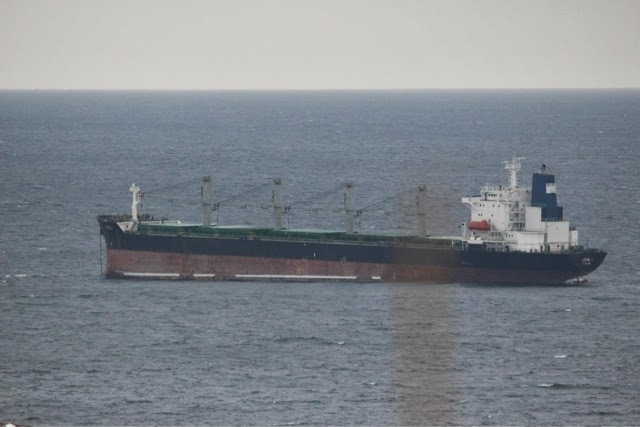 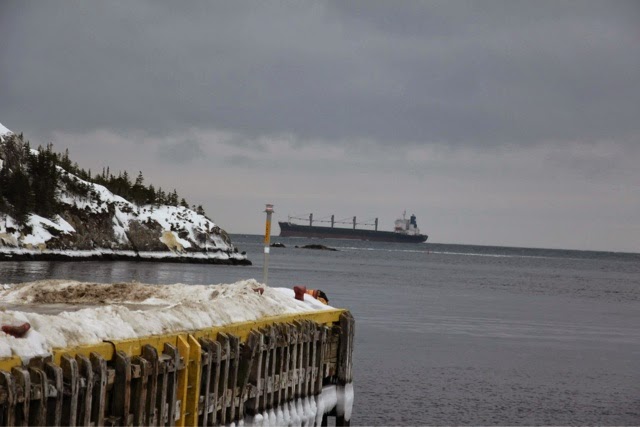 UPDATE: 04/16 AIS indicates the Tug Ryan Leet arrived on scene around 1430 ADT. She sailed from Mulgrave just after 0700 saturday, and reportedly was slowed by ice. (Below File photo of Ryan Leet) 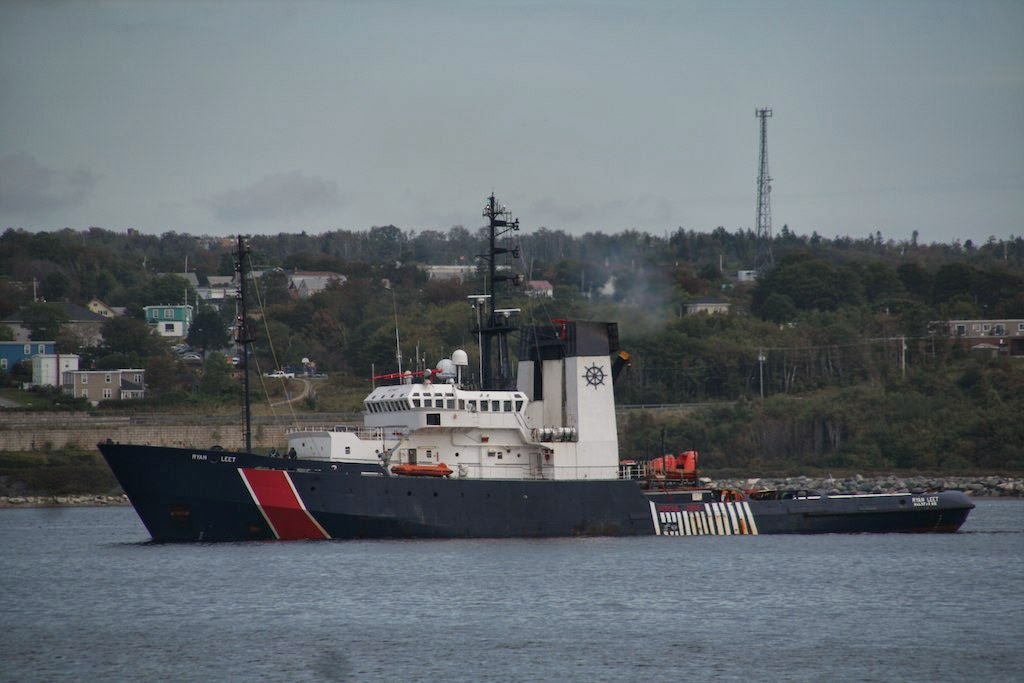 The transportation Safety Board also announced they are sending investigators to the scene of the grounding.

UPDATE 04/17: The owners have contracted Svitzer  to salvage the vessel. Svitzer has 3 tugs in Port Hawksbury (Point Chebucto, Svitzer Bedford and Point Valiant, all formerly based in Halifax) though they will likely retain the Ryan Leet as she is more powerful. The Coast Guard is amassing pollution control assets in Rose Blanche.

Photos below By Rolland Kettle: 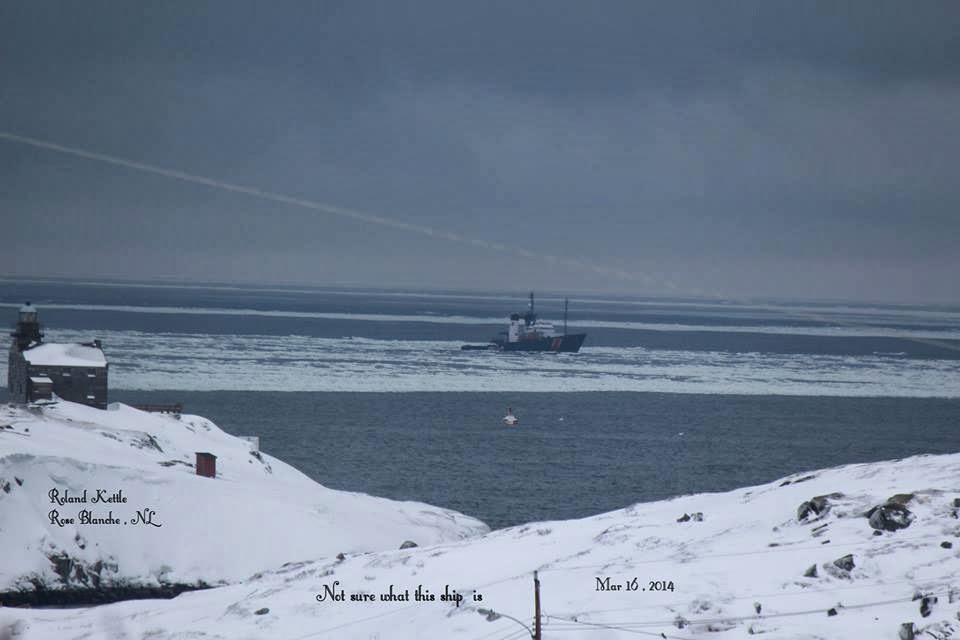 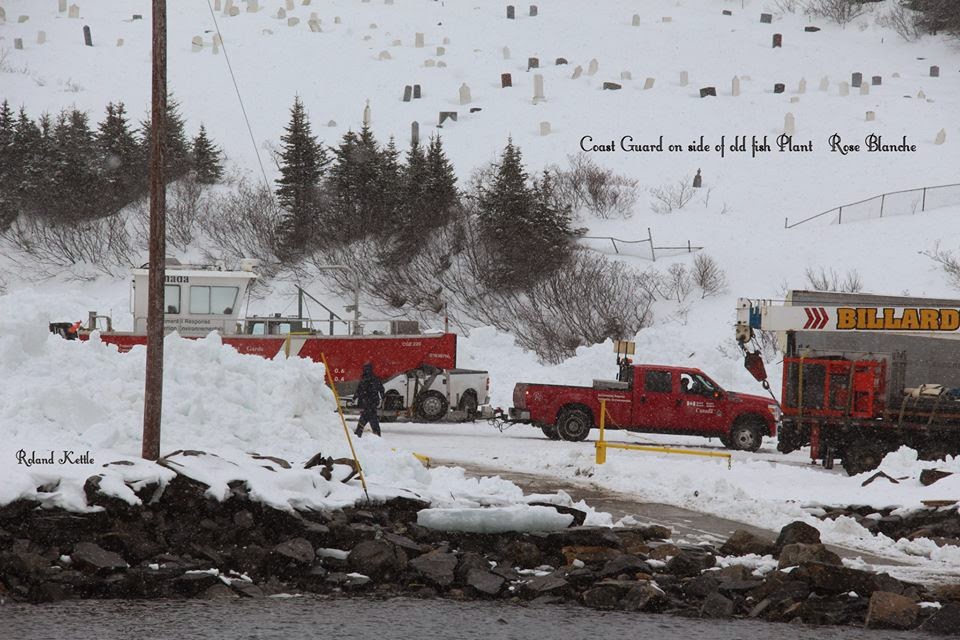 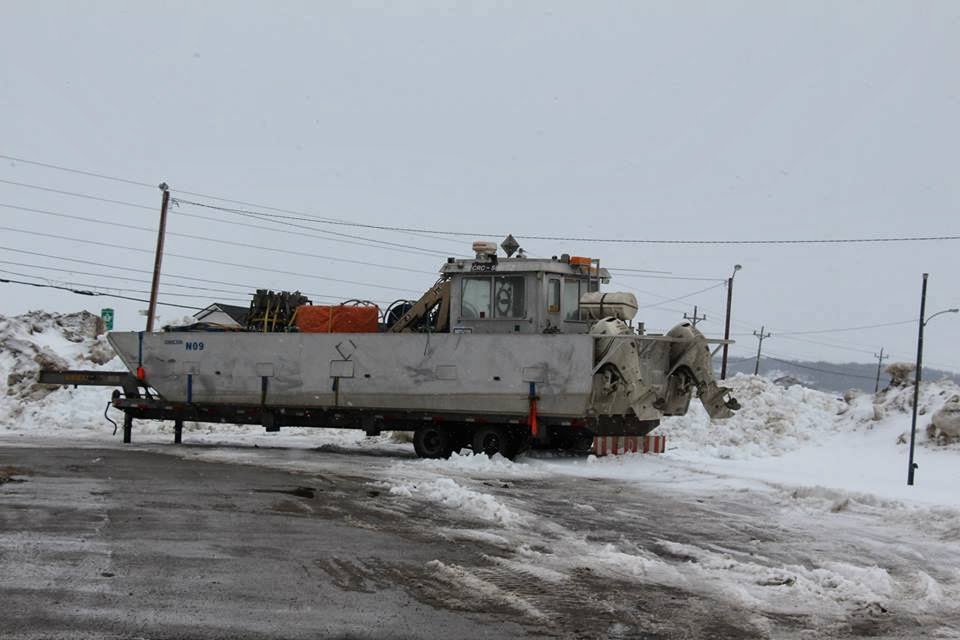 UPDATE: Shifting winds Caused the John 1 to become free overnight Sunday and  she is now securely at anchor. Attempts to pull the John 1 from the shoal by the tug Ryan Leet were suspended Sunday due to deteriorating weather and sea conditions. The Slvage team will board the vessle to perform an assessment once conditions improve.

UPDATE 03/18:
Salvage crews arrived and boarded the John 1. She will be towed by Ryan Leet and Atlantic Fir to Argentia for further assessment. No pollution has been detected, though ccgs Earl Grey will follow along with pollution control gear.
(Below)Salvage crew boarding the MV John I. — Department of Fisheries and Oceans photo 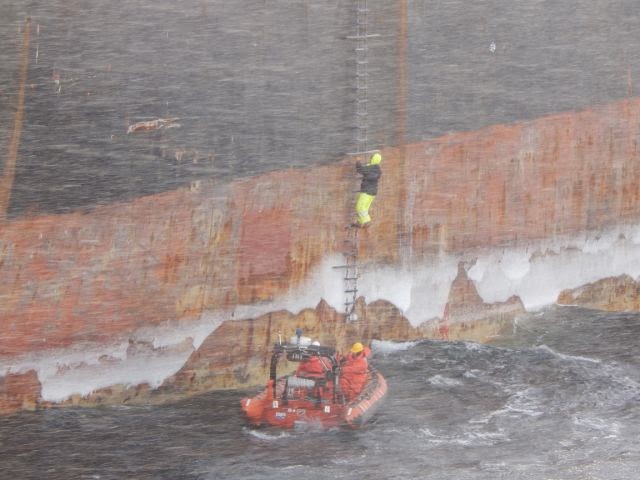 Preparations to tow are underway. A generator will be brought to the john 1 to power the anchor winches. Tow cables have already been connected. Once the tow commences the crew will follow aboard the earl grey.

UPDATE 03/20:
The following photo was provided to me. The tow is now underway. 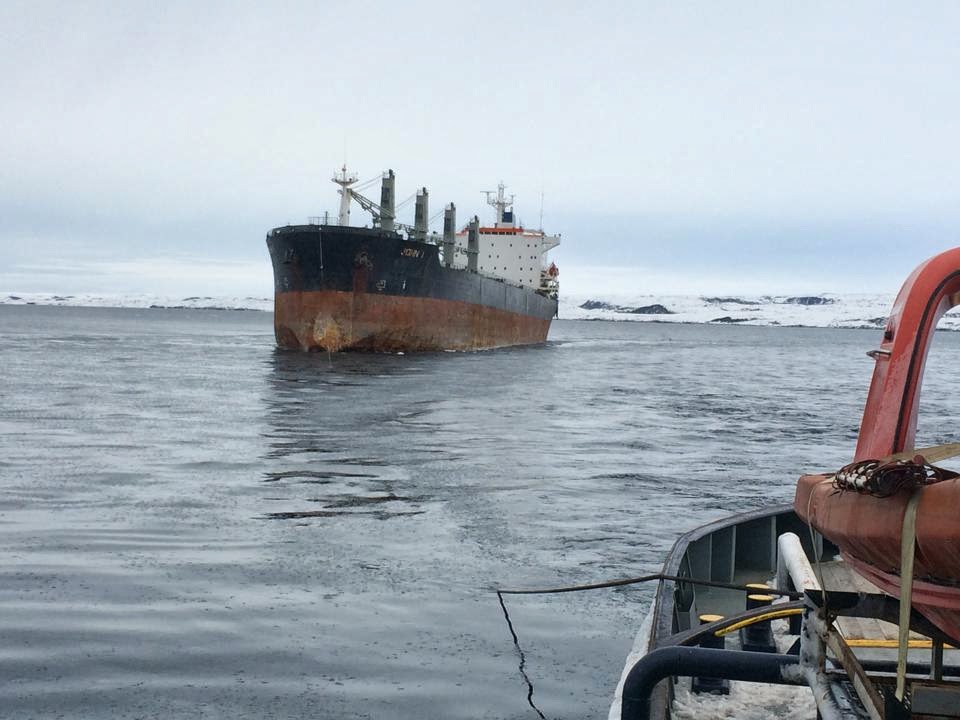 I have been informed that the tow is progressing nicely making 7 knots. Eta is 0800 Saturday 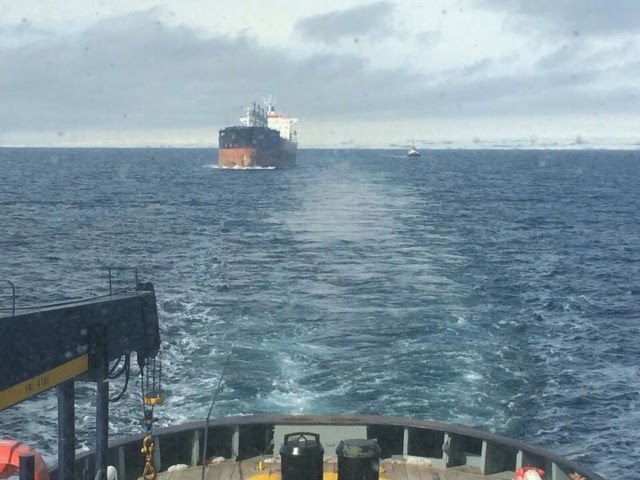 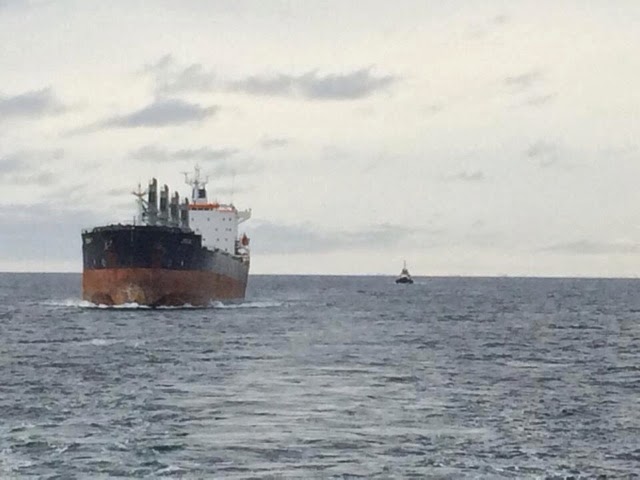 Overnight The tow  headed for shelter behind St. Pierre due to weather conditions. Weather permitting it should be heading back on course some time Friday.
The tow resumed just after noon with improved weather. Currently making 5 knots south of St Pierre 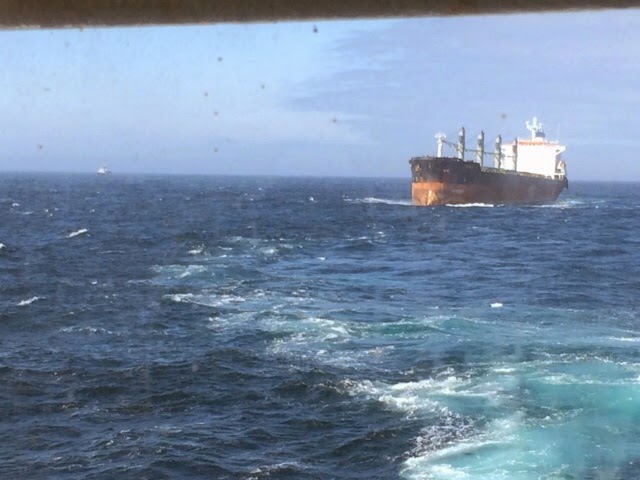 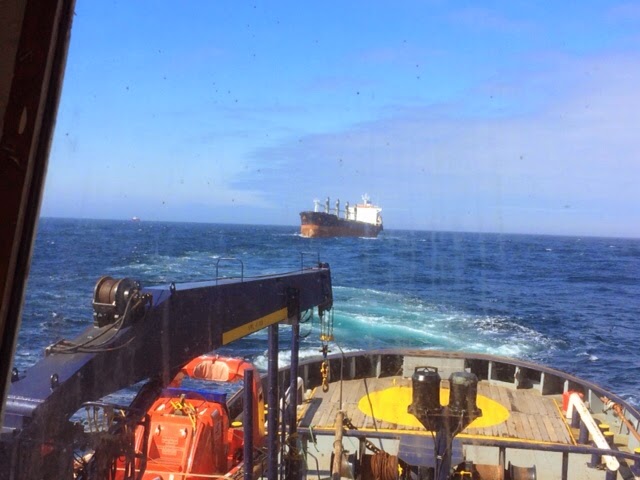 UPDATE 03/22:
Tow is now in the traffic lanes awaiting a pilot for Argentia. 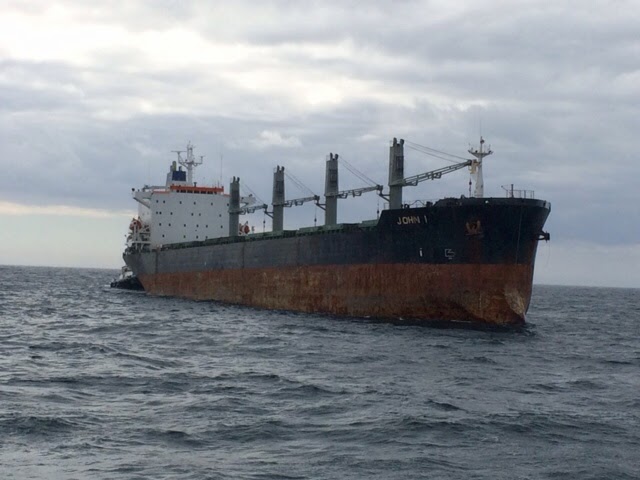 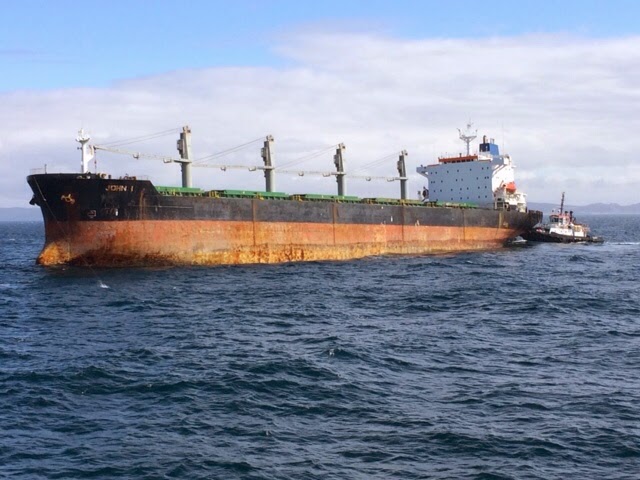 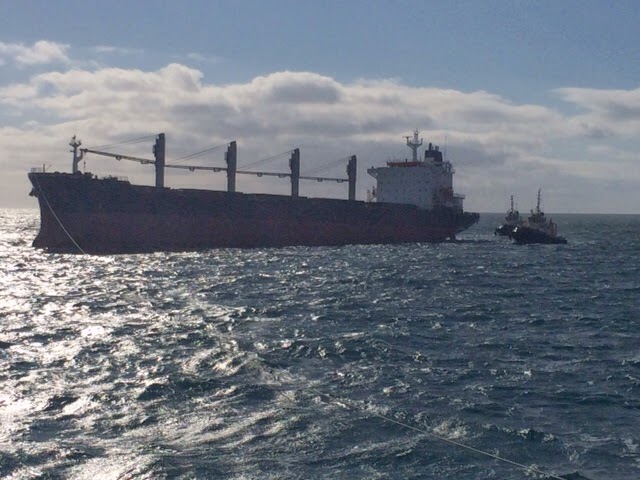 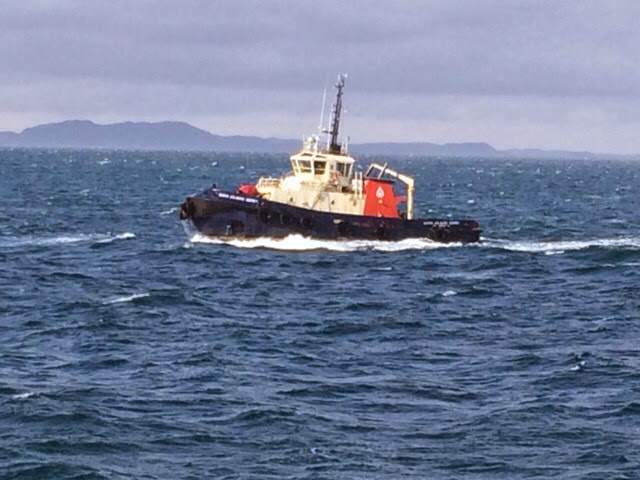 Now getting lines on the dock 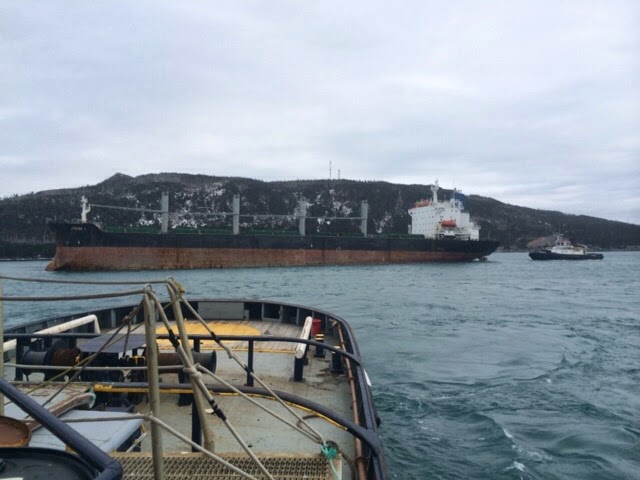 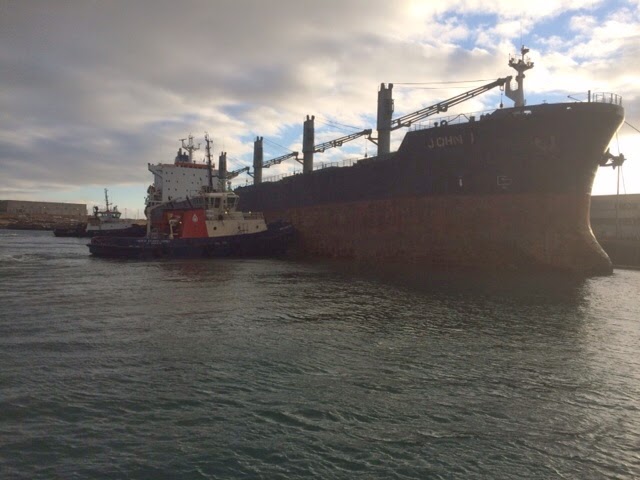 The Ryan Leet ,Atlantic Fir and CCGS Earl Grey are tied up in Argentia. The John 1 is under going diver survey and assessment, the Ryan Leet and Atlantic Fir are standing by until Sivzters Salvage team makes a decision on where the John 1 is going and how it will get there.

3 thoughts on “John 1 aground off Newfoundland”