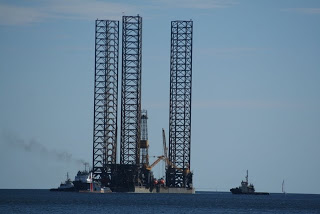 The Seajacks Kraken returned to halifax after comleting work off Deep Panuke. Her next stop will be the North Sea, and will likely be picked up by a dockwise vessel in the coming weeks after her avipods are taken off.

The Rowan Gorilla 3 returned to port today form the Sable project. after a few weeks in port, she will be off to work at Deep Panuke.

The Calamity Jane, a Pipe layer laying pipe for Deep Panuke is also tied up at Halterm.