Prof challenges senator’s port remarks
en. Stephen Greene’s recent suggestion to move container facilities from the Port of Halifax to the Strait of Canso may have been provocative, but a Saint Mary’s University professor says there may be inaccuracies in the senator’s statements

CCGS Hudson Circumnavigated the North and South America 40 years ago.
Covered Previously (Hail, hail to the good ship Hudson
) and A voyage of real discovery 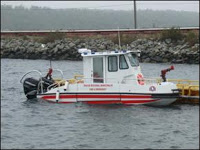 we also have the report of the TSB into the Capsizing Fireboat 08-448B Halifax Harbour, Nova Scotia 17 September 2008