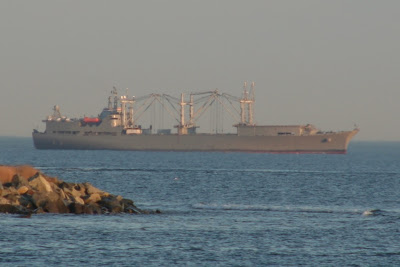 The SS Wright (T-AVB-3) is currently in the outer harbour anchorage. She is a Aviation Logistics Support Ships built for the United States Navy in 1968. Despite Being in the ready reserve, she appeared to be conducting Flying operations, which may explain why she is anchored more to the west then normal.

Wikipedia tells us that She is