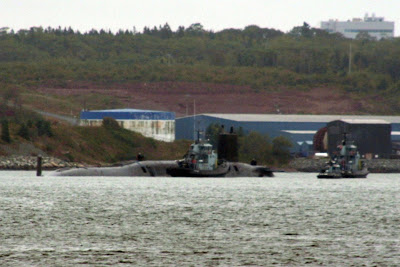 HMS Vengeance, A Royal Navy Vanguard Class Ballistic Missile sub arrived and tied up at Shearwater this morning. The class includes four boats, which are the: Vanguard; Victorious; Vigilant; and Vengeance, all built at Barrow-in-Furness by Vickers Shipbuilding and Engineering between 1986 and 1999.[2] All four boats are based at HM Naval Base Clyde, near Glasgow Scotland.

Hopefully Better photos on her departure.