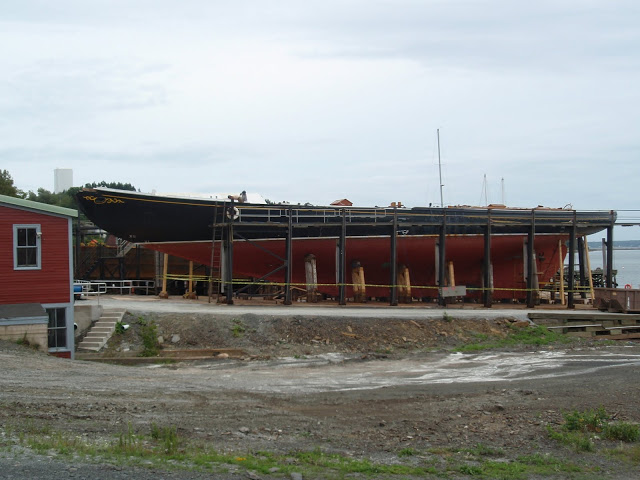 There has been much debate about whether the current Bluenose hull is a restoration or a replacement. Transport Canada has evidently allowed the Bluenose to carry the Builders plate of the 1963 hull, and will treat it as the same ship. But is it really?

First – the original bluenose was built in 1921 and Designed by William Roué as a fishing schooner. Schooners became obsolete for fishing, and she was eventually sold as a freighter. She Survived the second world war, but sank after foundering on a reef off Haiti in January 1946.

The Bluenose II was built in 1963 by the Oland Family to sell beer. (There is the Oland brewery in Halifax, now owned by Labatt, However the family still owns Moosehead in NB) it was later transferred to the Province of Nova Scotia for $1, and operated as the provincial sailing Ambassador.

Wooden Ships have issues as the age – timbers need to be replaced, they need to be painted and require constant maintenance. Wooden ships also Hog. Hogging is when a ship starts to bend – the keel develops a curve, and the frames begin to sag. Left unchecked, that can lead to failure of the Hull. Hogging was the main justification for the restoration work recently undertaken.

When the restoration began, Nobody was surprised when all the fittings were removed from the Hull and put in storage. The shock came when it was reported that the hull was disassembled, and the wood shredded and sent for recycling, and a New one would be built in its place. Despite the re-use of some fittings, this is a New Hull, and should not be Called the Bluenose II it simply isn’t.

First – the 1963 bluenose was built based off the original William Roue Drawings. It was not an exact replica, but it wasn’t intended to be. The 2011 hull is being built with drawings that were prepared by Marine Architects, and were done so without the use of the original Roue Drawings – the 2011 Hull is therefore not to the same design as the 1963 Hull.

Second – The 2011 Hull is made from Modern Laminated Lumber, of tropical origin. The Bluenose and the 1963 Hull were made from Locally available lumber. Its not the same plan, its not the same materials, how can this be a restoration.

Lets look at a Couple of Restorations.
The Japanese have several pagodas made of wood, that date back to 706ad. The likelihood that any part of the original temple is still there is slim, however the temple is continually refreshed, and bad pieces replaced with New. So while no single piece actually dates back to 706, each piece shares a lineage and existed with other pieces at a moment in time. The temple is not periodically torn down and replaced every 40 years when some rot shows up. The bad pieces are refreshed.

The Government even uses this lineage principle, when attempting to justify that this is a restoration, and not a replacement, when they refer to the original masts being reused. The masts they refer to are not the original 1963 masts – One of those can be found flying the Nova Scotia Flag at Historic Properties in Halifax, however they shared a lineage with the rest of the vessel. Unfortunately it is too simplistic to refer to the hull of the Bluenose as just another component. The Hull is the Ship, and everything else are simply fittings. This would be like taking Julies cloths and jewelry, putting them on Jennifer, and calling her Julie. Call her what you want, but Jennifer is not Julie.

On a more appropriate scale, Lets look at the restoration of the whale ship Charles W. Morgan at Mystic Seaport in Connecticut. The Charles W Morgan was badly hogged – this has been removed with the careful use of jacks. Rotten Frames and Hull timbers need to be replaced, and they are, with traditional methods (though modern tools) and where possible with lumber originally cut in the same era (thanks to a lumber cache found underwater at the former Boston Naval Yard). What makes the Charles W. Morgan restoration all the more impressive is that it is being completed by a non profit organization, with donations and volunteer labour (though not all). Oh – an the Charles W Morgan’s maiden voyage was in 1841. She worked for 80 years, and has been a Museum ever since. The Goal of the restoration is to take her on her 38th voyage.

So, despite what the politicians say, The 2011 Bluenose is clearly a replacement, as no effort was made to perform the work actually required to fix her. Her 2011 hull shows no lineage or connection to the 1963 hull, is not made to the same drawings, or with the same materials and methods. It is hard to say which Bluenose, One or Two, came to the more tragic fate. I say Bluenose II has the more tragic ending, as she met the wood chipper, whereas the Bluenose died as a working ship. So, lets just call the 2011 Hull the Bluenose III, so we can all reflect on the shortsightedness of destroying a piece of Nova Scotia goodwill, and replacing it, with a modern product. The province already owns the Name Bluenose III anyway. 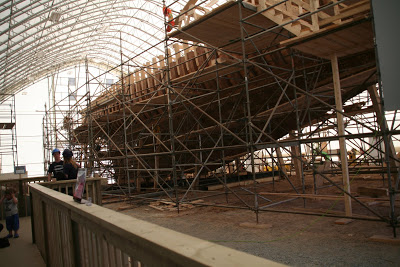 One last footnote, This Piece is intended to be critical of the decisions of the owners of the Bluenose. The Lunenburg Shipyard Alliance is building an excellent ship, and I’m sure It will be an excellent Sailing Ambassador for Nova Scotia, and I hope this generates much additional work for them. I think, that if you are going to build a new vessel, you should use modern materials and methods – which is what they are doing – however it is disingenuous to say it is a restoration, when its a new build.