HMS Scott is an ocean survey vessel of the Royal Navy, and the only vessel of her class. She is the third Royal Navy ship to carry the name, and the second to be named after the Antarctic explorer, Robert Falcon Scott. She was ordered to replace the survey ship HMS Hecla.

Designed to commercial standards, she provides the Royal Navy with a deep bathymetric capability off the continental shelf. At 13,500 tonnes Scott is the fifth largest ship in the Royal Navy. Scott is lean-manned with a complement of only 78. This is made possible by adopting commercial manning practices such as the use of fixed fire fighting systems and extensive machinery safety surveillance technology. Scott has been specially designed to carry the modern High Resolution Multi Beam Sonar System (HRMBSS). This swathe echo sounder is capable of collecting depth information over a strip of the sea bed several kilometers wide & gives Scott the capability of surveying 150km2 of ocean floor every hour. 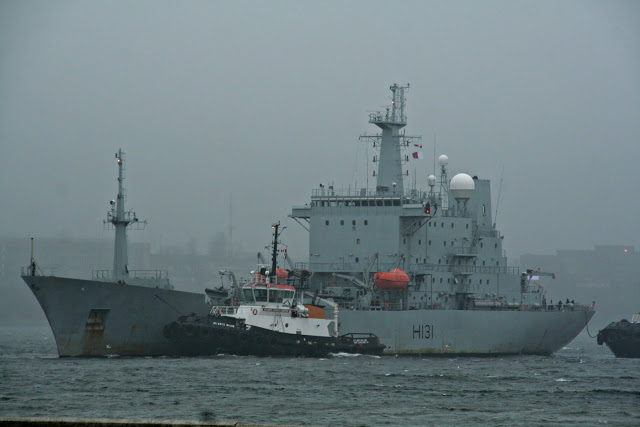 She will Be in Halifax untill the 4th.
Info Above form Wikipedia and the Royal Navy