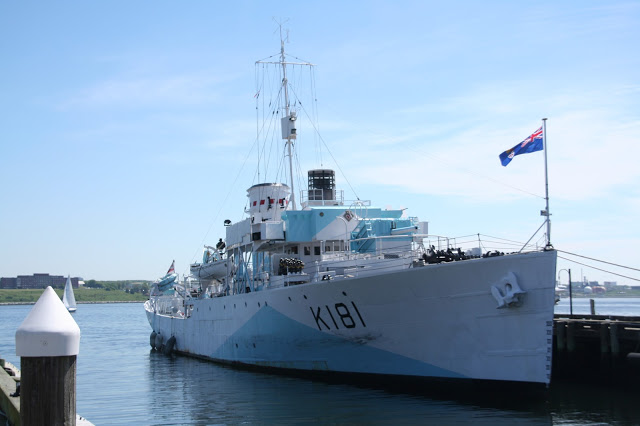 Today at 10am, HMCS Sackville made her way to Sackville landing for the summer season.

On the 4th and 5th of June, 5 teams pitched their concepts for Battle of the Atlantic Place. Bellow is how they got to that point.

A significant milestone has been reached in the plan to commemorate the remarkable contribution by Canada in the Battle of the Atlantic when a jury, established to evaluate design proposals for the new Halifax waterfront landmark, compiled its short list.

Proposals were submitted from 10 consortia representing more than 100 companies from Canada, the USA and Europe. The selected design teams ( in alphabetical order) on the short list are:

Those five move to the second stage of the selection process which requires a presentation of preliminary design ideas in early June.

Battle of Atlantic Place, an initiative of the Canadian Naval Memorial Trust, will be the new home for HMCS Sackville, the last remaining Corvette – the ships critical to victory in the Atlantic.
Ted Kelly, a director on the Trust’s Board, said Sackville is a fitting symbol of the extraordinary effort by hundreds of thousands of Canadians, who “came from what was largely an agrarian society to develop a capability to engage in a war at sea.”

Battle of Atlantic Place will be more than home to Sackville. The facility will provide a memorial to more than 4,000 people who gave their lives in the conflict and have no known grave.  Perhaps most importantly, Mr. Kelly said, “it is intended that the story of amazing achievement of that generation of Canadians will be told in a manner such that future generations know of the struggle and sacrifice of their forebears in the accomplishments that shaped the character of their country.”

Members of the evaluating jury are drawn from across Canada.  They are: Andrew Amos, engineer, senior partner in the firm of Catalyst Engineering Consultants and Project Manager; Paul Merrick, internationally renowned architect and founding principal of Merrick Architects Ltd. of Vancouver and Victoria; Randy Mosher, quantity surveyor and cost consultant based in Moncton; Jamie MacLellan, public art consultant, Halifax; Guy Larocque, engineer, who served as director of facilities at the Canadian War Museum; and Ted Kelly, a former naval Captain, who heads the Battle of Atlantic Place project team.

The federal, Nova Scotia and Halifax Regional Municipal governments, along with several corporations and individuals have made contributions towards the development of a design concept for Battle of Atlantic Place.