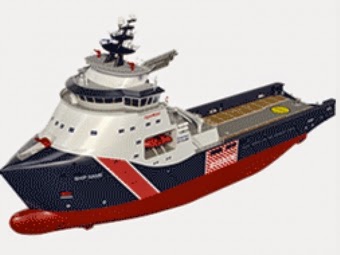 Secunda Canada is proud to announce that Secunda has entered into an agreement with Hibernia Management and Development Company Ltd (HMDC) and ExxonMobil Canada Properties for a five year firm contract, plus a total of 15 years options at Charterers’ discretion, to support the Hibernia and Hebron fields offshore Newfoundland and Labrador.

Idar Hillersoy, CEO of Secunda made the announcement stating, “This contract is an important next step in Secunda’s plans for fleet renewal and growth in the Canadian market”. Secunda will be building one offshore support vessel of Rolls Royce, UT 782WP design, with delivery end 2015.
Vessel design and concept development has been developed through close collaboration with our part-owner Siem Offshore, Rolls-Royce and Secunda. The design has been optimized bow to stern for the demanding scope and harsh Grand Banks conditions including all the latest technologies related to safety for vessel crew and operation. At the heart of the vessel is the robust hybrid propulsion system which increases the vessels operational flexibility and reduces fuel consumption. The vessel’s main role will be the transport of cargo, with ancillary roles including ice management, and anchor handling.

Secunda has supported ExxonMobil Canada’s offshore operation support vessels in Atlantic Canada for nearly two decades. Secunda’s Director of Business Development, Chris Pitts commented, “We are proud of our record on safety and reliability with HMDC and ExxonMobil Canada, and we look forward to continuing to deliver the exceptional service levels for which Secunda is known. This contract re-enforces our long-term position in the Canadian market”.