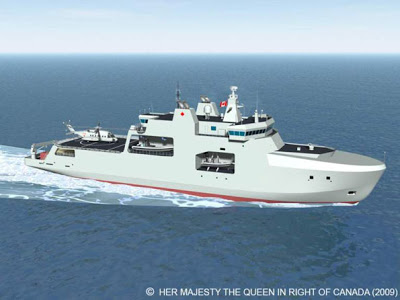 The first ships to be built in Halifax are the 3 Arctic Offshore Vesssels.
As this procurement program was begun several years ago, and Contracts for design work awarded in 2008, Presumably there is a design sitting in an office in Ottawa somewhere. The rendering above Comes from the DND project office, and represents the working design of the vessel.

Its worth noting that these vessels displace 5780 tonnes compared to the Halifax class frigate’s 4750 t, and at 98m are not much smaller (aprox. 30m). The extra weight is Due to the ice class Hull. The top speed of 17 Knots, is not much faster then the Current MCDV’s top speed of 15. The Mcdv’s slow speed is what planers say make it unsuitable for Coastal Patrol, so these AOPS will likely be limited to the Arctic Area of Operations. For more, See:The Arctic/Offshore Patrol Ship (AOPS) Projectand CASR