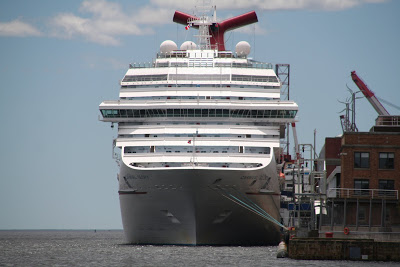 The Recent outbreak of Norovirus at a local resturaunt, now seeming to have come from the passengers  of the cruise ship Carnival Glory brings up the topic of Quarantine .

The Act states: 12.
(1) Where, in the course of a voyage of a vessel to one of the ports referred to in subsection (3), (a) a member of the crew or a passenger on board the vessel has
(i) died,
(ii) had a temperature of 38°C (100°F) or greater that persisted for two days or more or was accompanied or followed by a rash, jaundice or glandular swelling, or
(iii) suffered from diarrhea severe enough to interfere with that person’s work or normal activity,

the person in charge of the vessel shall, by radio at least 24 hours prior to the vessel’s estimated time of arrival at its port of destination and between the hours of 9 o’clock in the forenoon and 5 o’clock in the afternoon, notify the quarantine officer at the quarantine station designated in subsection (3) for that port of the occurrence and provide him with the information described in subsection (2).

In Halifax, The Quarantine Station is at Anchorage 1, and is identified by the Symbol of a cross in a circle as below: