This afternoon we will see Bunkering  – US Style.
In Halifax (And much of the rest of the world im told) Bunkering is done from a smallish dedicated Tanker – such as our own Algoma Dartmouth, and the NT Dartmouth before that.

The shuttle tankers Kometik and Mattea will be bunkered via the Barge Columbia with the Tug Siberian Sea. It is common in the US to use a Tug and Barge to move oil, as this combination requires less crew then a full tanker does. This sort of combination makes periodic apperances at the Imperial Oil Docks.

There is no word on why Algoma Dartmouth is not being used, However it could be the Algoma Dartmouth, or the Low Sulfer Fuel required is unavailable.  UPDATE: It appears the Low Sulfer Fuel is not currently available in Halifax. In the Fall refinery shift their product lines, and Imperial Oil may currently be shutdown for that transition. Algoma Dartmouth was imported to Canada, but an agreement was made that it could not trade outside the Harbour, or the Substantial Import Duty would need to be paid on her. Thus  she is unavailable to make the trip to St John NB.

The Tug Siberian Sea and Barge Columbia are owned by K-SEA OPERATING LLC, and are based out of New York NY. The tug was built in 1980 and is Powered by two EMD 12-645 E-2 diesel engines, she is a twin screw tug rated at 3,300 horsepower. The Barge Columbia has a capcity of 58000 Barrels.

Eta is 1400. Photos to follow.
The tug and barge arrived after 6pm tonight, and set right to work. The Barge is hard to see as it it very low in the water. Better Daylight Photo’s Tomorrow. 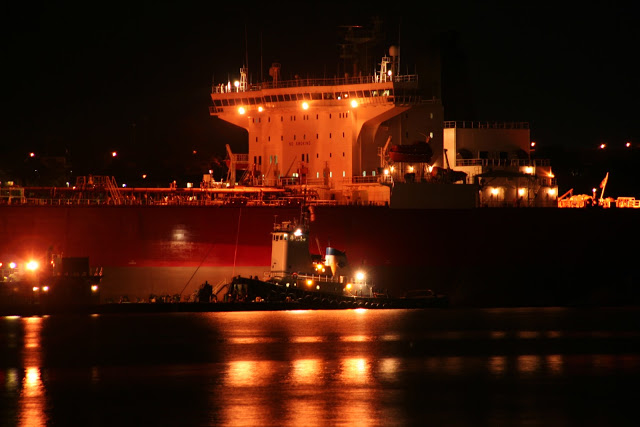