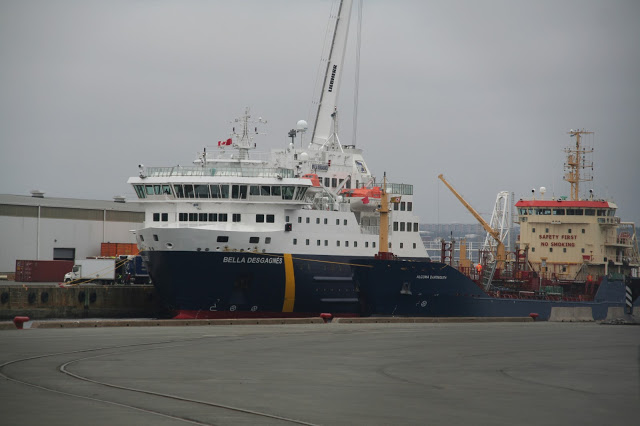 Relais Nordik, a subsidiary of Desgagnés’s new ship arrved in Halifax today. The ship, Bella Desgagnés left Italy Friday, March 22, 2013, for Canada with an expected crossing time of 14 days to get to Halifax, where she will stop to clear customs and be restocked. The plan was then for her to proceed to Blanc-Sablon where she was planned to dock the evening of April 7, 2013. (2 days ago). the Bella Desgagnés was then to begin a familiarization trip & offer visits in all ports of the Middle and Lower North Shore as well as in Port-Menier, before heading to Sept-Iles to be christened. (Originally scheduled for April 15, 2013)

Immediately after her call in Sept-Îles, the ship will proceed to Rimouski to finalize documentation and formalities for Transport Canada approval, as is the normal procedure for a new ship destined for coasting trade in Canada, where she will then begin her regular service on April 29, 2013

Relais Nordik Inc. is a fully owned subsidiary of Groupe Desgagnés inc.; it transports passengers, general cargo and vehicles from the main terminals of Rimouski, Sept-Îles, Havre-Saint-Pierre and Natashquan, and to the eight ports of the communities it serves, i.e. Port-Menier, Kegaska, La Romaine, Harrington Harbour, Tête-à-la-Baleine, La Tabatière, Saint-Augustin and Blanc-Sablon. Each of these port agencies assures the reception, containerization, transportation and delivery of merchandise to the client.

Another Degagnes Vessel, the Dara Desgagnés Is currently undergoing rudder work in the Nova Dock at Halifax Shipyards.