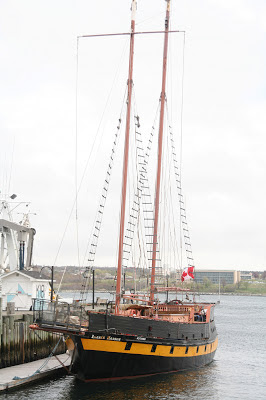 Today broght the arrival of the Scooner Liana’s Ransom. She is tied up at Sackville Landing. She worked as a tour boat in Halifax Between 2007 and 2010, before heading South and offerign tours out of the British Virgin Islands. She is on her way to Tall Ship Festival in  Miramichi NB (http://www.miramichitallships.ca/) May 31 – June 2

She will be Joined by PeaceMaker and Unicorn, Both Currently tied up in Lunnenburg, Pride of Baltimore II (Currenlty 90nm SW of Halifax) and HMCS Sumerside, and Theodore II

Liana’s Ransom is an 85 foot, steel hulled schooner built in Houston, Texas. Construction began in 1998, but she was not launched until 2002. She was bought by the current owners in the spring of 2005 in Seabrook, Texas. She was sailed home to Nova Scotia in the fall of 2006, the 2500 nautical mile voyage taking 20 days. Originally designed as a Staysail schooner, she was converted to a gaff rigged, square topsail schooner over the winter of 2006/2007.