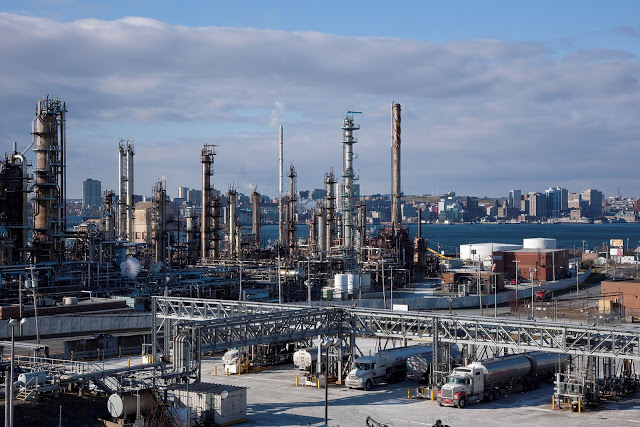 Looks like Imperial Oil is hutting down the refinery, and Converting to a terminal operation, Like Ultramar did previously. this means that Imperial Oil will basically operate a tank farm which recives refined product by tanker, and then distributes it, by tanker, truck or Rail.

This will also mean an end to the Larger tankers Visiting Halifax, as refinded product tankers tend to be smaller then the Crude Oil Carriers.

From the Imperial Oil Press Release:
Despite interest in the refinery assets over the past year, Imperial was unable to attract a buyer to continue operating the refinery. The initial start-up of the converted facilities is planned for later in 2013 depending on progress with facility modifications in the coming months. Decommissioning surplus facilities will be a multi-year process.

The refinery began production in 1918 and has throughput capacity of approximately 88,000 barrels per day. Approximately 200 employees and 200 contractors are employed at the refinery and related terminals. Minimal changes are expected to the operation of the related terminals located at Dartmouth, NS, Sydney, NS, Corner Brook, NL, Sept-Iles, QC and Cap aux Meules in the Magdalen Islands.