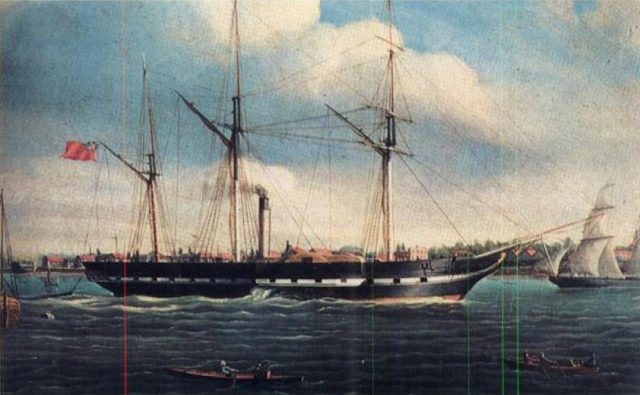 SS Royal William was a Canadian steamship that is sometimes credited with achieving the first crossing of the Atlantic Ocean to be made almost entirely under steam power, using sails only during periods of boiler maintenance

She was commissioned by brewer John Molson and a group of investors, built in Cape Blanc, Quebec by John Saxton Campbell and George Black she was launched on 27 April 1831. The steam engines were made and installed in Montreal. She made several trips between Quebec and the Atlantic colonies in 1831. Her owners decided to sail her to Europe and find a buyer. She departed from Pictou, Nova Scotia on 18 August 1833 with seven passengers, a small amount of freight and a load of coal and arrived at Gravesend on the River Thames after a 25-day passage.

Royal William was eventually sold to the Spanish Navy where she served for many years and earned the distinction of being the first steamship to fire a shot in anger during a minor Spanish rebellion.

One of Royal William’s co-owners was Samuel Cunard a merchant from Halifax Nova Scotia who drew important lessons from the ship which he applied when he founded the Cunard Steamship Company a few years later.