There are reports that a Coast Guard Helicopter Crashed in the Arctic Monday night, Killing 3 persons on board.

More Details as they are known.

The CCGS is Currently looking to replace its fleet of Helicopters. The Halifax Based vessel CCGS Sir Wilfred Laurier is currently working in the Arctic assisting with Parks Canada’s search for the Franklin expedition ships  HMS Terror and HMS Erebus.

UPDATE: CBC Reports the Crash occurred in the McClure Straight at 6pm Mountain time (9pm Atlatntic). The Helicopter was Operating with the CCGS Amundsen, and crashed on its return to the ship after conducting an ice patrol.

UPDATE 2 also Via CBC
, the coast guard announced the names of the deceased:

The Helicopter was a Messerschmitt BO 105S. the Amundsen had just performed a full crew change on the 5th. 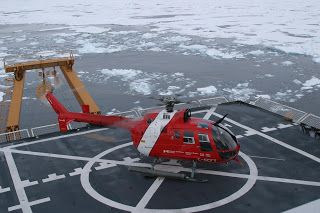