ACL’s New Ship Atlantic Star made her first Appearance in Halifax Today. A Con-RO, the RO-RO cargo is kept centered, and containers are stored on either side. (and Above)  She is loaded right to the bow, and features a blunt nose. She also took 2 tugs – g3 vessels usually took none. 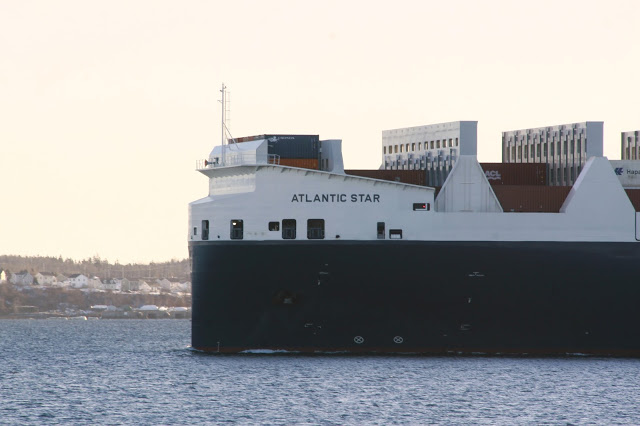 ACL Sent me the following Release:

Fritz B. King, Managing Director of Atlantic Container Line said “he is proud to see ACL’s innovative design that increases capacity without significantly changing the footprint of the previous vessels.” The “Atlantic Star” joined the company’s transatlantic service in December. The remaining four G4 vessels will be delivered during the first half of 2016. “ACL’s new fleet represents a clear commitment by our parent company, Grimaldi Group, to our clients that ACL’s unique product brand and service level will remain a strong force in markets for years to come.”

In 2014, the company held a company-wide contest to name the new vessels, over 5,000 names were received. The “Atlantic Star” and her sister ships, “Atlantic Sail, Sea, Atlantic Sky and Atlantic Sun” were submitted and named by Halifax’s own Andrea Cox, who is a Customer Service Representative at our Halifax Customer Service Center.

The G4s are bigger, greener and more efficient than their predecessors. The container capacity is more than doubled at 3800 TEUs, plus 28,900 square meters of RORO space and a car capacity of 1300+ vehicles. The RORO ramps are wider and shallower and the RORO decks are higher (up to 7.4 meters) with fewer columns, enabling much easier loading and discharge of oversized cargo. Emissions per TEU are reduced by 65%. The fleet continues to employ cell-guides on deck, a feature that will allow ACL to extend its enviable record: ACL ships have never lost a container over the side during the last 30 years. 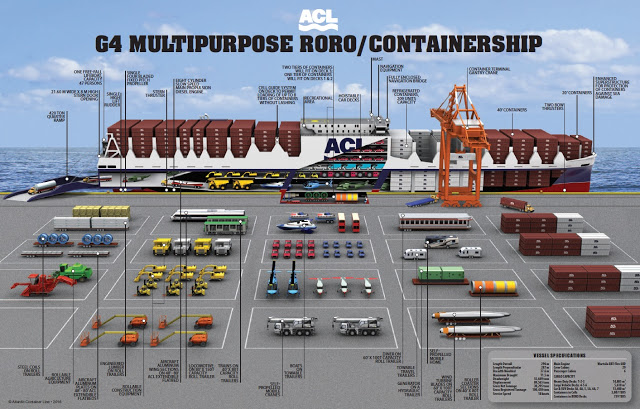 1 thought on “Maiden Call, on maiden Voyage of Atlantic Star”