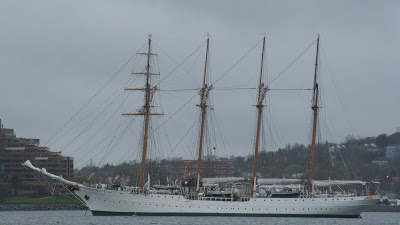 Chilean Navy Barquentine Esmeralda due today. Built in 1954, she now serves as a training ship, but is reported to have been a floating prison and torture center for political prisoners of the Augusto Pinochet regime from 1973 to 1980.

The NFB Produced a film Called the Dark side of a White Lady about the ships use in torture.

The Dark Side of the White Lady, Patricio Henríquez, provided by the National Film Board of Canada