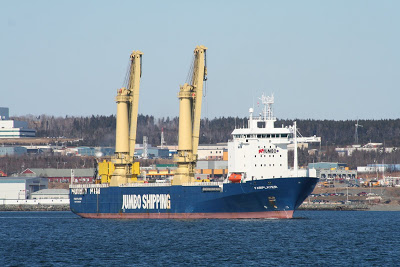 The heavy lift ship Fairlayer made its first call in Halifax March 5 to 10, 2009 to load a consignment of twenty-two railway locomotives. Seven of the units are bound for Rotterdam and the remaining fifteen will go to Egypt.
The ship is fitted with a pair of 900 tonne capacity derricks which can be combined to lift 1800 tonnes. Her hull is specially adapted to carrry heavy and bulky objects. The ship’s owners, Jumbo Shipping, a Dutch company are specialists in heavy lifts and awkward loads that do not fit on conventional ships.
She is seen here leaving Halifax March 10 bound for Rotterdam. If you look carefully you can see a crew man in an orange suit at the top of the mast securing one of the derrick booms. These had to be lowered to clear the Angus L. Macdonald bridge.
Share this…