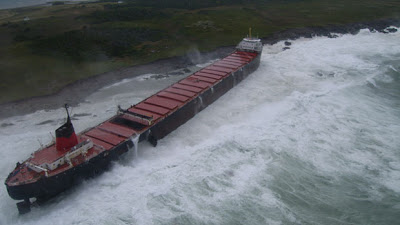 A week ago, Dexter made comments about the tax payer being on the hook for the Cleanup. Dexter’s comments made no sense at the time, as the vessels insurance company would pay for successful salvage. However, now a week later, it appears that the Miner is the sole asset of the company that owns it, and is uninsured. I suspect Dexter knew this when he made the comments, As it came out today from the Mammoet Salvage Master commented that the De-Oiling was paid for by the Coast Guard.

With no Insurance, there is no motive to attempt salvage. It appears that the options are to have the government remove the ship, or leave it there. I suspect leaving it is unpalatable for political reasons.