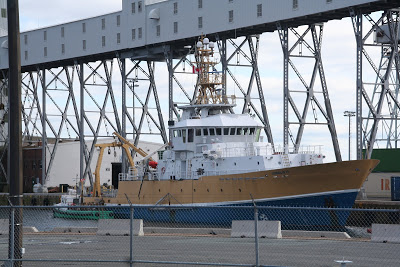 Though Tied to the University of Laval, Coriolis II is currently conducting an undersea Survey for Hiberina Atlantic. Hiberiana Atlantic is a sub sea cable operator who recently announced a new cable connecting New York with London. The shortest route across the ocean is a great circle route, and halifax happens to lie on the atlantic edge.

This particular cable is meant to be the shortest route between London and New York, to save 5-6ms (thats Mili seconds, or 6 thousandths of a second). To obtain the savings, the cable will have to be shorter then the all the others, which means it must lie perfectly on the great circle, and be pulled tight. The entire route will need to be surveyed.