Tradewinds is reporting that

A post panamax containership is on fire in the middle of the North Atlantic after an explosion in a containerstack. The crew of the 6,732-teu MSC Flaminia (built 2001) have abandoned ship with four of the 25 seafarers reported to have suffered injuries and one missing. A rescue is currently underway with the oil tanker DS Crown the nearest vessel able to provide assistance to the crew who took to a lifeboat and liferaft. The incident happened about 1,000 miles from the Canadian and UK coasts so beyond the range of rescue helicopters.

DS Crown is the former Front Crown which was sold to new owners and was renamed in Anchorage 1, before she sailed in last week

Tradewinds reports that 2 crew have died, and 2 tugs with firefighting equipment are on route. A Lloyds Open Form salvage agreement has been signed with SMIT.

UPDATE 2:
See http://www.reederei-nsb.com/site_en/index.php?node_id=2338 for official releases from the ships owner. Firefighting equipent has arrived, and the plan is to extinguish the flames and tow the vessel to europe. Reederei NSB also released the following Photos: 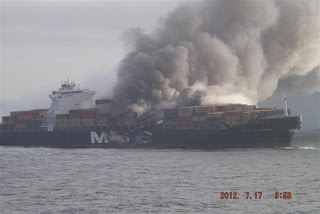 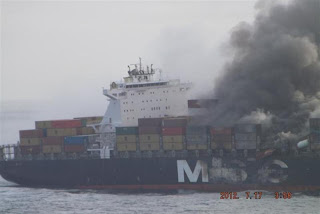 UPDATE 3 (July 19) There has apperntly been a second explosion, leading to a halt of fire fighting Efforts. An addtional Tug is also enroute