The Toronto Star (http://www.thestar.com/news/canada/article/1310126–canadian-naval-destroyer-damaged-under-tow-near-nova-scotia)!ran an article on the Athabaskan tow incident and illustrated it with an interesting photo. The photo in question shows Athabaskan along side a merchant ship. The merchant ship appears to be GTS Katie, and he photo is from the conclusion of operation Megaphone

From Wikipedia:
At the conclusion of Operation Kinetic, the Canadian contribution to a NATO peacekeeping force in Kosovo and Macedonia, the Department of National Defence contracted SDV Logistics Canada Ltd to transport military assets, including 580 vehicles, 390 sea containers of equipment and three Canadian soldiers who were escorting the cargo.

During the voyage, a dispute between the various contracting parties arose over payments due, and Third Ocean claimed that $288,000 remained outstanding from Andromeda. As a result of the dispute, Third Ocean ordered the Russian captain of the Katie, Vitaly Khlebnikov, not to enter Canadian waters.

Negotiations continued between the Canadian government and the shippers, however an ultimatum was given and the three contractors failed to reach an agreement by a certain deadline, according to Art Eggleton, then the Minister of National Defence.A diplomatic note was sent to the government of St Vincent and the Grenadines, where the ship was registered, who authorized Canadians to board the vessel.

On 30 July, the destroyer HMCS Athabaskan received orders to close with the Katie about 225 kilometres off Newfoundland, in international waters, and maintain visual contact with her. The following day, the frigate HMCS Montreal joined Athabaskan. At 1:45 pm on 3 August, fourteen sailors boarded Katie in a helicopter-borne assault from a Sea King, led by Captain Drew Robertson, during which the crew of the Katie offered no resistance.Captain Khlebnikov would later complain the boarding of the ship was “dangerous” and described the boarding as an “attack”, although Captain Robertson had observed that the Katie began erratic, evasive maneuvering after being warned of the imminent boarding. 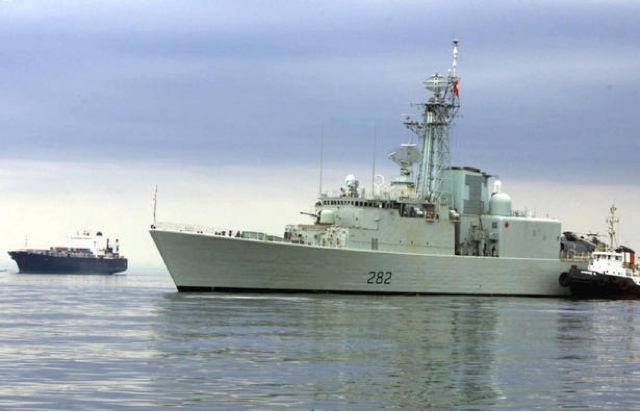