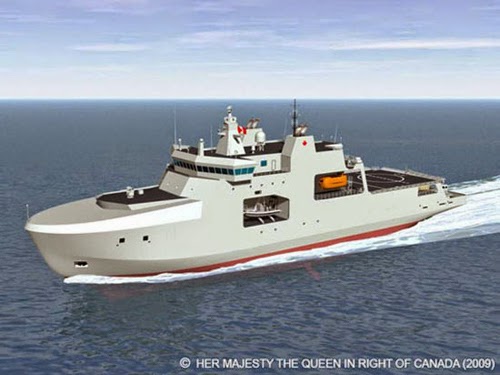 The Government today announced the name of the first of the Royal Canadian Navy’s (RCN) Arctic/Offshore Patrol Ships (AOPS). Her Majesty’s Canadian Ship Harry DeWolf, named in honour of a wartime Canadian naval hero, will be the first of a fleet of AOPS designed to better enable the RCN to exercise sovereignty in Canadian waters, including in the Arctic. The Prime Minister made the announcement at His Majesty’s Canadian Ship Haida, formerly commanded by Vice-Admiral Harry DeWolf, which currently serves as a museum ship and is located on the waterfront of Hamilton, Ontario.

Subsequent ships in the class will be named to honour other prominent Canadians who served with the highest distinction and conspicuous gallantry in the service of their country. The Arctic/Offshore Patrol Ships Class will henceforth be known as the Harry DeWolf Class, with Her Majesty’s Canadian Ship Harry DeWolf as the lead ship.

A native of Bedford, Nova Scotia, Vice-Admiral Harry DeWolf (RCN) was decorated for outstanding service throughout his naval career, which included wartime command of His Majesty’s Canadian Ship St. Laurent from 1939-40, for which he was twice the subject of a Mention in Dispatches (a national honour bestowed for distinguished service). Later, his 1943-44 command of His Majesty’s Canadian Ship Haida helped that ship gain the reputation as “Fightingest Ship in the RCN,” participated in the sinking of 14 enemy ships, and for which he was again twice the subject of a Mention in Dispatches and awarded both the Distinguished Service Order and the Distinguished Service Cross. A consummate leader both ashore and afloat, his exceptional wartime service was recognized with an appointment as a Commander of the Order of the British Empire and as an Officer of the U.S. Legion of Merit. He was also awarded the Canadian Forces Decoration, soon after its creation, to recognize his good conduct throughout his career. He went on to become a popular and effective postwar Chief of the Naval Staff from 1956 until 1960.

For the first time in its 104-year history, the RCN will name a class of ships after a prominent Canadian naval figure. Vessels have traditionally been named for cities, rivers and Native tribes.
Share this…