Reports are that the small cruise ship Saint Laurent is taking on water in a lock on the seaway. She was bound for Toronto.

Saint Laurent visited Halifax last week. The ship appears to be in the lock which suggests she bumped the side entering the lock.
More details to follow.
UPDATES:
Several injuries are reported. Photos on Twitter show the bow impaled by part of the lock. The lock has re portly been drained so the ship is sitting on the dry bottom of the lock.

UPDATE 06/19 0900:
Michael Folsom @theshipwatcher has a Source on scene providing Photos. I have posted a few bellow for the benefit of non Twitter users. It appears that the Ship went to far forward in the lock, and struck the ledge that the upper lock gate sits on. 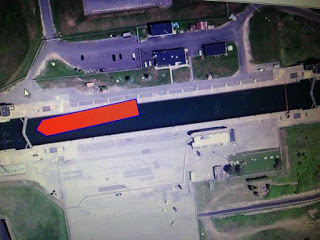 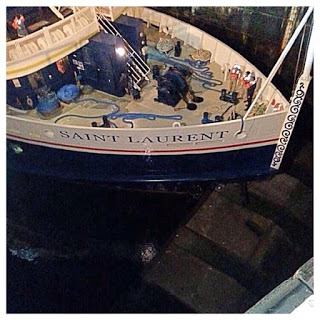 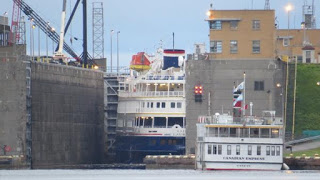 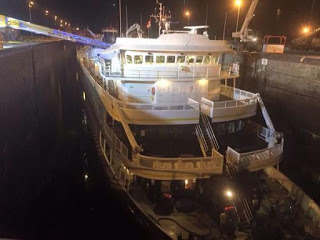 Update 06/20:
Group Ocean tugs are on route and last noted near Montreal. Presumably they will pull the boat out of the lock. Seaway rraffic is backing up in both directions due to the closure.
Reports are that a Canadian river pilot was aboard, and that the Saint Laurent suddenly accelerated when the auto pilot was disengaged.
The size of the impact dent suggests she had some speed when she hit the lock, which would be abnormal for entering a lock.
Share this…