1. This week in the Herald 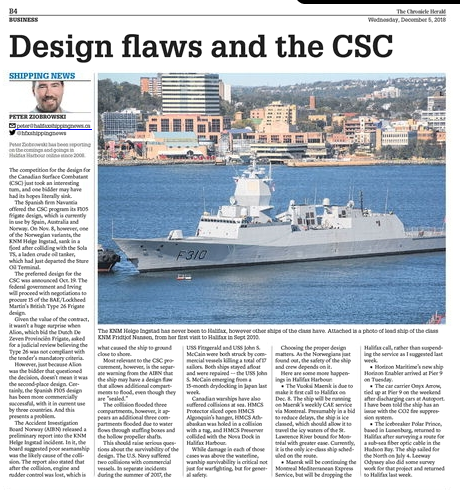 I talk about the sunken Norwegian frigate, and its implications for the CSC

2. More CSC Flaws?
Post media is reporting that DND has concerns about the type 26 potentially having power and propulsion problems due to similarities with the British type 45 – which has issues.

3. Raising the sunken frigate
Naval today has an illustrated guide to warship salvage. – or How they will raise the Sunken Norwegian Frigate. In typical European fashion, they will use a large crane.

1.Shipspotting in Vancouver.
I love this infographic for the Port of Vancouver. BTW, our shipspotting 101 series goes into way more detail on various types of ships that call in Halifax.

Dec 4, 1933 – Leading Seaman John Pully from HMCS SAGUENAY is buried at sea following his death on 30 November 1933 from leukemia. His burial off Halifax is considered the RCN’s first burial at sea.

Dec 3, 1969 – During HMCS BONAVENTURE’s final cruise, 2 sailors died when they entered an AVGAS tank that was not fully vented, 2 sailors that attempted to save their shipmates were also killed.

#OTD 2/12/1946 #RememberRCN -HMCS MIDDLESEX ran aground on Half Island Point, near Halifax enroute to assist the fishing vessel Ohio. She is declared a total loss. Photo -For Posterity’s Sake pic.twitter.com/ZzmWxfZbTu

Nov 30, 1835 – Mark Twain, was born in Florida, MI. He worked as a pilot on Mississippi steamboats before becoming a writer. Mark Twain is a pen name, taken from a command used while sounding the river with a lead line.