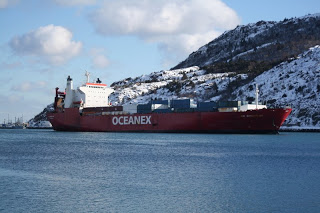 I received an email tonight, from a new reader.. Amoung other things, she said “

I’ve passed the link on to my friend in Wallsend, UK, (on the River Tyne, home of shipbuilding) who lives a stone’s throw from what used to be the Swan Hunter Shipyards – now just acres and acres of rubble. He’s a shipspotter too and was surprised one day to see the Oceanex Sanderling on the Tyne. It then went to Europe and is still not back.

From Shipspotting.com I found out that She is at the A&P Yard at Hebburn for repair. I’m not sure what for though, Sanderling shows on the Oceanex Schedule for mid April, so I’d imagine She’ll be back soon..
Photo of the Sanderling, As Seen In St. John’s NF, Jan 2008 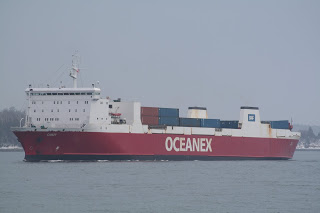 The Cabot Recently Under went a refit at Halifax Shipyards and appears to be covering Sanderlings route. 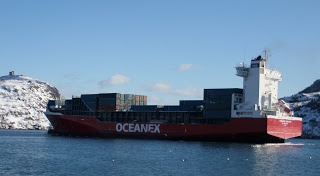