The First of the Coastguards Midshore Patrol vessels will be Private Robertson V.C.

From the Press Release:
In a solemn event at Irving Shipyard, Minister Peter MacKay, Minister of National Defence and Regional Minister for Nova Scotia and Minister Keith Ashfield, Minister of Fisheries and Oceans unveiled the first of nine ‘Hero’ Class Mid-shore patrol vessels currently being built for the Canadian Coast Guard. The Coast Guard ‘Hero’ Class vessels are named after Canadian heroes who have given the ultimate sacrifice for Canada. The first vessel in the class to enter service will be the CCGS Private Robertson V.C. Members of Robertson family accompanied the minister on the tour. 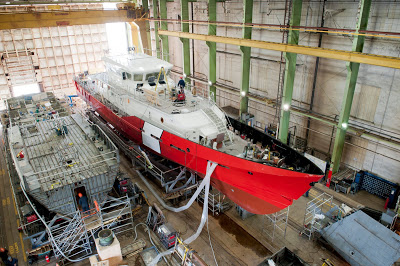