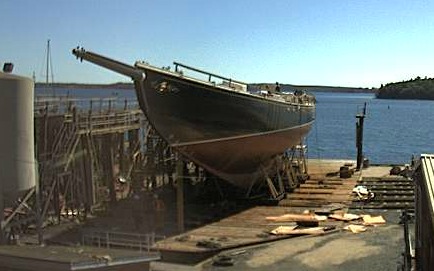 The Province of NS today announced that the Bluenose will be Launched September 29th in Lunenburg. The day-long festivities will begin with the official Bluenose II relaunch from 7-9 a.m., to take advantage of high morning tides. The relaunch, which is weather dependent, will slowly winch out the ship so it can slide into the water.

“Bluenose II is in position now for relaunch,” said Peter Kinley, president of the Lunenburg Foundry, and one of the partners in the Lunenburg Shipyard Alliance with Covey Island Boatworks and Snyder’s Shipyard, who are completing the restoration for the province.

“We have to start installing uprights and other relaunch equipment soon. This week is the best time to get photos at this stage,” Kinley said.

After launched, Bluenose II will be moored by the Fisheries Museum of the Atlantic

Alas, I will be unable to attend, So please be sure to send me pictures. (Photo Above from NovaScotiaWebcams.com)