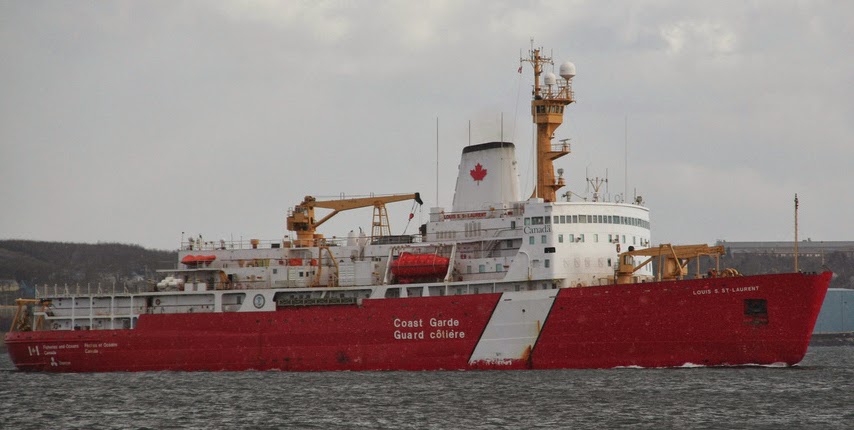 Ice has been a big issue this year, And Halifax based CCGS Craft have been working in Newfoundland and the Gulf of St Lawrence this winter.  Earl Grey responded to the grounding of John 1, and Edward Cornwallis and Sir William Alexander are also both working that area. Newfoundland sent CCGS Cape Roger to fill in here.

The one Oddity in all this Is the Louis St Laurent. The Largest icebreaker in the CCGS Fleet, she has been tied up at BIO since arriving on February 11th.  In January, She put in to port for a week for crew change, so she may be expected to sail in the coming days, but that still begs the question why the largest icebreaker in the fleet took a full rotation off.

The Canadian Ice Service, has stated that there is 10 per cent more ice this year compared to the 30-year average referring to both the amount and thickness of the ice.

With the Great Lakes and St. Lawrence Seaway facing the thickest and broadest ice cover in years, the Canadian Shipowners Association (CSA) is extremely concerned that Canada’s ice-breakers will not be able to create and maintain the routes needed to move key cargo to Canadian and American industries.  The Canadian Coast Guard is doing its utmost to work with resources across a large geographical area subject to heavy ice, but this situation is rippling into Canada’s transportation and economic system.

Concerns over ice conditions and the ability of the Canadian Coast Guard to provide sufficient ice-breaking has delayed the opening of the St. Lawrence Seaway past opening dates achieved in recent years. Despite Canadian government efforts to encourage the movement of Canadian grain, it will remain stored in ports such as Thunder Bay until ice breakers open ports and support ship movements. Not only are Canadian grain movements threatened by insufficient ice-breaking, so too are other industries with already low stocks of commodities such as iron ore, construction materials, salt and petroleum products which are moved by ships.
CSA and its members have advised the Canadian Coast Guard of the need to employ three ice-breakers to support the opening of the Great Lakes- Seaway system. Disappointingly, the Canadian Coast Guard’s effort to commit the necessary resources appears to be late as it manages challenging winter conditions in many regions.

The Canadian Coast Guard’s fleet of ice-breaking ships is aging and too few in numbers to support the economic and environmental benefits of short-sea-shipping in Canada. The CSA calls on the Canadian Coast Guard to fulfill its support to maritime commerce immediately by deploying three additional ice-breaking assets to support shipping throughout the Great Lakes – St. Lawrence Seaway system while also meeting obligations to support navigation in the St. Lawrence River and Maritimes. Furthermore, CSA encourages the Government of Canada to find a longer-term solution to augment assets.

what is ice like on the lakes, Check out this time lapse of the Laker Wilfred Sykes leaving winter layup.