The crude oil carrier Australian Spirit is apparently in trouble off Halifax and is need of a tow.
She sailed from Staten Island NY on the 4th, bound for York. She reportedly lost stearing last night, Aprox 75km off Chubecto head.

I Know no further details at the moment, but was tipped off by a Canadian Press reporter covering the story. Anyone know anything? email me info@halifaxshippingnews.ca

UPDATE: the tug Atlantic Larch is reportedly on Scene, and the Venture Sea and CCGS Earl Grey appear to be on their way.

There is a Good argument for the CCGS to be equipped for emergency towage. As the Current multipurpose buoy tenders and light icebreakers reach the end of their useful lives, they should be replaced with a Off the Shelf ice classed Anchor handling Supply tug design. Such vessels are equipped for towing operations and feature large working decks for cargo transport. A suitable crane could be provisioned for buoy work. this would Add to the Coast Guards capability, and preserve the existing service levels.

UPDATE:11/12/14 1200AST: Tanker is under tow, and expected in Halifax for repairs later tonight. They currently apper to be making about 4 knots, and are 31 nautical miles off Chubecto head, suggesting a 2000ADT eta.

UPDATE 1430AST: Halifax Port Authority says the Australian Spirit will go straight through to the Bedford Basin, where she will anchor.

UPDATE 12/12/14 0935AST: Australian Spirit was due to take her pilot at 9am. She currently appears to be off chubecto head, likely waiting for the Outbound Heather Knutsen  to clear the channels allowing more room to maneuver. I suspect She will also take on Tugs Atlantic Fir and Willow, currently escorting the outbound Heather Knutsen. 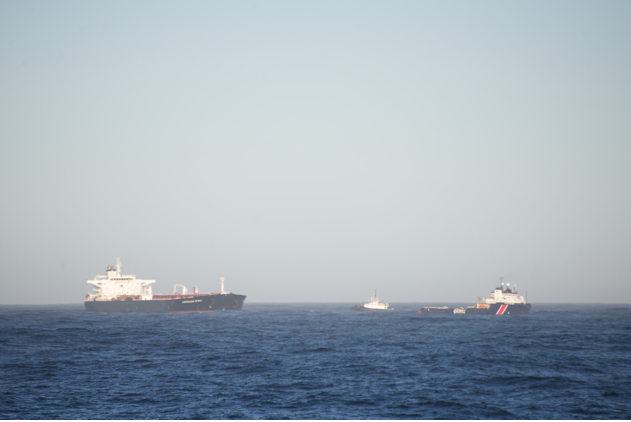