The issue of trucks to the Port recently was cited by the federal government as a reason to deny funding to modify Halterm and the Halifax Ocean terminals to accommodate multiple ultra class container ships. these ships, which are 10,000+ teu vessels are supplanting smaller ships on more routes, as carriers form alliances, and look to find efficiencies. 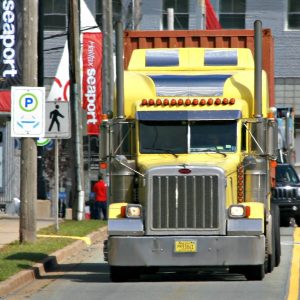 But are trucks really that big a problem? The port of Halifax has an 80/20 split rail vs trucks. in 2017, the port handled 559,242 twenty-foot equivalent units (TEU). A 2016 study conducted for the city counted 648 trucks in a 24 hour period. This is just over 300 vehicles. By Comparison, Hollis street sees 700 vehicles in an hour during peak times.

I conducted 2 polls via twitter. while they have a selection bias, the results were interesting. the first poll found that 39% of respondents felt that trucks to the port were the worst downtown traffic, however, 61% thought something else was worse. The Road Train (19%) Harbour Hopper (15%) and cyclists (27%) combined are more hated then trucks.i found it interesting that for all the talk they get, more people are actually annoyed by another group of road users, which are actully largely seasonal.

follow up conversations actually identified couriers and people illegally stopping as a big problem for all road users, as their stops block lanes, and sidewalks and force people to have to go out of their way to avoid them.

Regarding cycling movement it’s all the cars & delivery trucks; & that is an HRM issue. The problem is there are no small mistakes involving an 18 wheeler. That is just one issue regarding mobility. Go count how many intersection lights there along the street. pic.twitter.com/fUyUl5pPt3

I also conducted a second poll to see how many trucks people thought were traversing downtown to the port. 33% of respondents thought there were more trucks then there actually are, with 14% believing there are over twice as many as there really are.

So seemingly the problem may not be as bad as we think it.

The Port of Vancouver is an interesting case study for a Number of reasons. First – like Halifax, the port facilities are located through communities away from highway access. Second, Vancouver is ranked consistently as one of the most livable cities in the world, and third, thier port operations are significantly bigger then ours, so if their solutions are working, then that should be adoptable here.

I was told by Chris Clarke, a spokesperson for the Vancouver Fraser Port Authority that 2/3 of the ports cargo arrives by rail, and 1/3 by truck. Vancouver therefore has many more trucks then Halifax does. Vancouver also lacks direct highway access.

The Port of Vancouver has a community liaison committee to collect feedback and offers a feedback line where residents can call in to report issues including noise.  Vancouver worked with the Province of BC to institute a truck licensing process. Trucks delivering to the port, must meet certain age and environmental standards to be permitted port access. Clarke also told me that they work with local law enforcement to ensure trucks operate safely, and meet standards.

One interesting thing the Port of Vancouver mentioned is that they try to route trucks over fresh pavement. by smoothing out the ride, they are able to keep noise from rattling empty containers down.

A study conducted by the City of Halifax looked at constructing an inland terminal. Essentially all truck activities and empty container storage would happen at the inland terminal, and containers would be moved between the port and the inland terminal by rail. Such a system solves the downtown truck problem, and expands port capacity by 250,000 TEU, from the current upper limit of 900,000, simply be re-allocating land use.

that study also looked at the feasibility of using the railcut to move trucks as well as trains. it found it could be a viable solution, though careful consideration would be needed to ensure rail uses were not impacted, and to leave room for commuter rail in the future. presumably the truck entrance to the railcut would happen around the Fairview overpass, possibly via a ramp off Joseph Howe. This would also have the benefit of a direct road link between the terminals.

A final option that has not been previously proposed or studied, is actually a variation on an old plan for a Northwest Arm bridge. If the city built the planned, but never started Northwest Arm bridge, and highway connection to the 103, it could be used as a dedicated transit and Truck route. this would solve the problem of getting buses from Spryfield, Tantalon and Timberlea onto the peninsula bypassing traffic choke points, and remove trucks from downtown. Trucks could exit into the railcut to access the port from Robie street, and could be subject to a toll to fund the road. Busses could connect to Robie.

Now might be the time to invest in infrastructure. However,  if the Port of Halifax working with the city and Province adopted some of Vancouver’s strategies to mitigate disturbances caused by trucks,  we could offset the impact of trucks on our community.