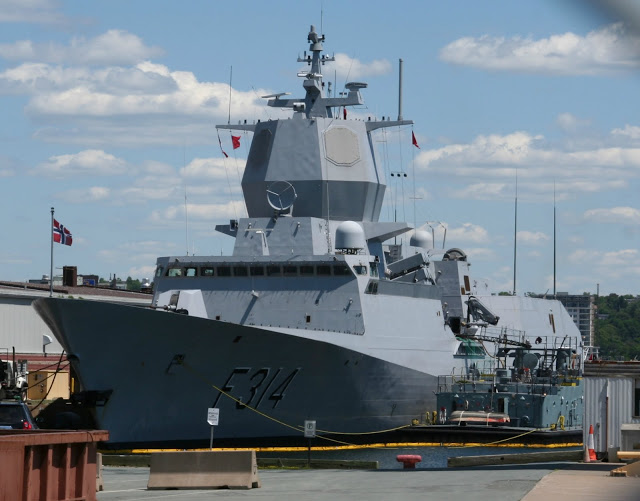 KNM Helge is a Nansen Class Frigate. Pictured is KNM Thor Heyerdahl on a2012 port visit to Halifax

The Norwegian frigate KNM Helge Ingstad was stuck early this morning by the tanker SOLA TS while anchored west of Bergen. The tanker had just loaded North Sea Crude oil, and was departing the fjord when the incident happened.

the Frigate was participating in the Nato Exercise Trident Juncture, which also featured Canadian frigates HMCS Halifax and HMCS Toronto. the 137 crew members were able to evacuate the ship, with 7 minor injuries reported. Marine traffic reports the frigate was not broadcasting AIS at the time.

New imagery from the Norwegians this morning. looks like the ship has settled on her side. She was not broadcasting AIS at the time of the collision, and appears to have been holed by the tankers protruding anchor hawsepipe, which looks to have left a large gash from the hanger aft. 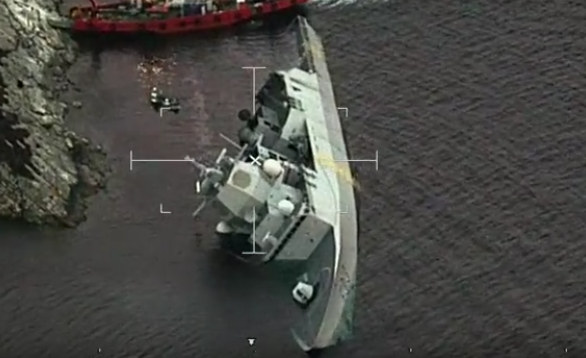 Still taken from this video

Just speculation; looks like these might be collision points on 🇳🇴frigate KNM Helge Ingstad and 🇲🇹tanker Sola TS. No other part of tanker hull that sharp, and strong too to take anchor strain. Damage below waterline prob. from bulbous bow. #shipspotting #HelgeIngstad pic.twitter.com/csFlKMmxHm

Images of the damage caused to #Norwegian #frigate #HELGE INGSTAD F313 from #collision with tanker SOLA TS. Views are obvioiusly before the ship partially sank. The below-water damage to the ship was more extensive than the photos can show. pic.twitter.com/7Nbgo8U7Bc

she looks to be down more on her side. 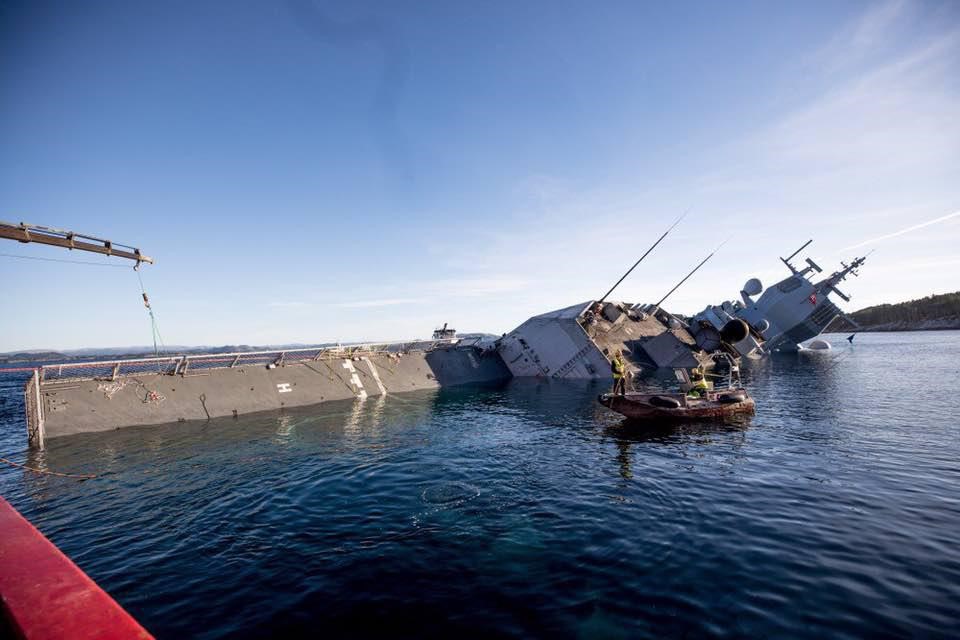 Update 11/13:
Shes Sunk. Overnight the 7 lines holding the ship to shore broke, and she slipped beneath the waves. The Norwegian government announced on the 12th that the ship was secure.

Word is she was actually sailing when the incident occured, and not anchored, and was aware of the presence of the outgoing tanker. An audio log obtained by Norwegian media has revealed that the frigate failed to change course despite repeated warnings that she was on collision course with the tanker. Significant questions about Seamanship and damage control need to be asked after this incident. 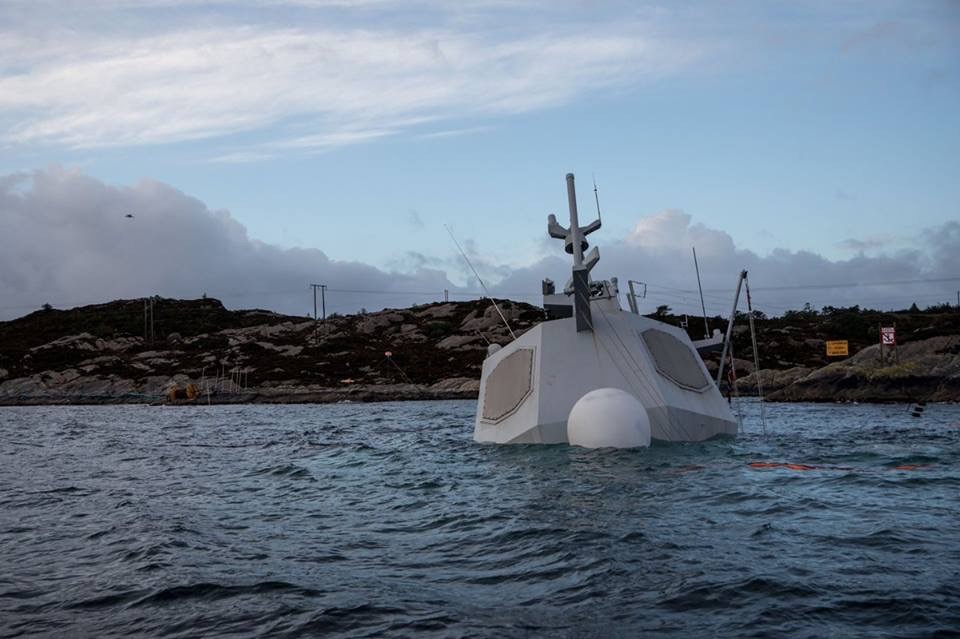 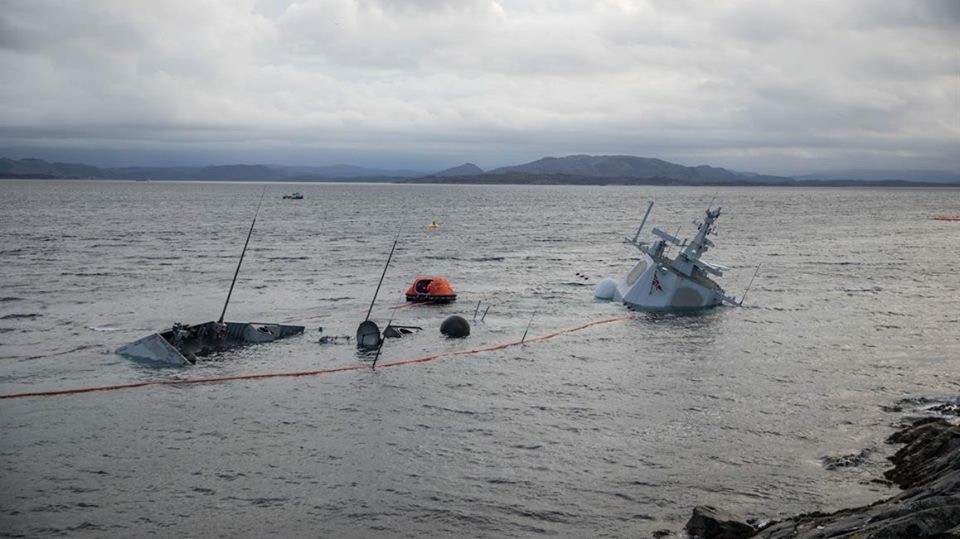 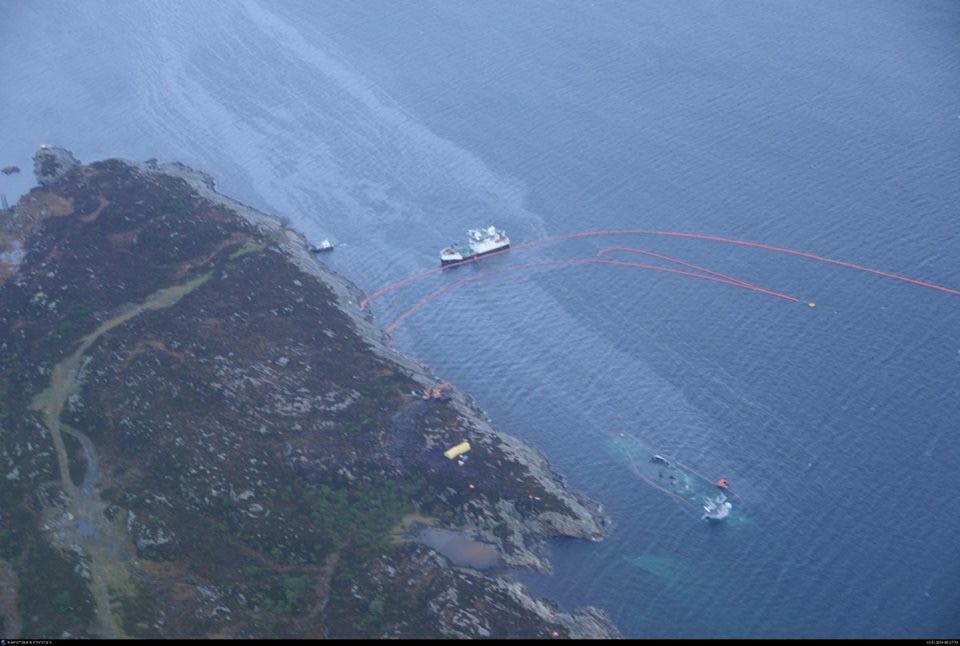 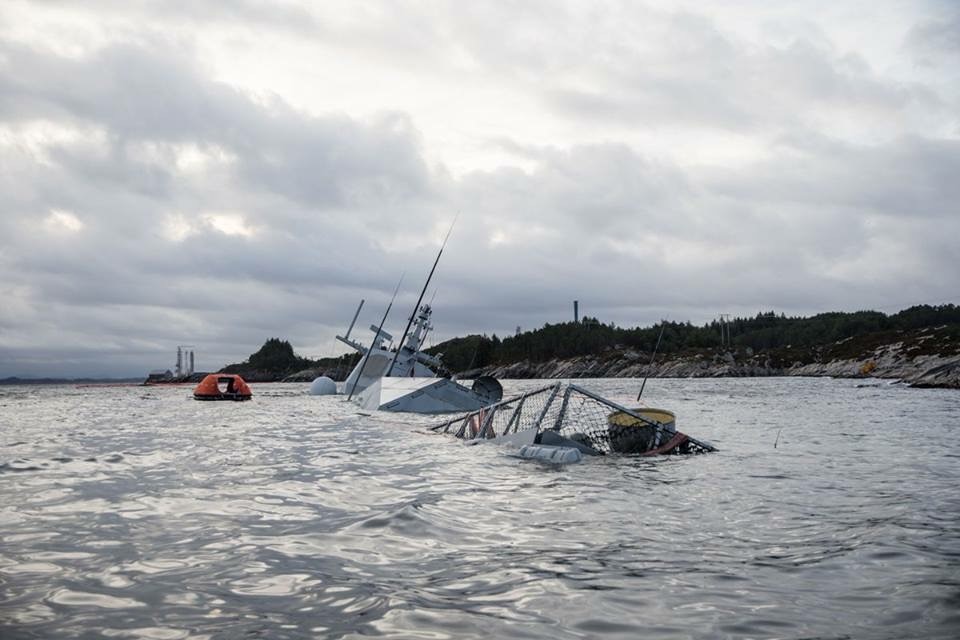 #HelgeIngstad: radar and radio logs indicate she was speeding south at 17 knots. Minutes before collision, Sola appeared to suggest Ingstad to swing stbd (pass portside to portside), but Ingstad feared getting too close to shore, so tried to pass stbd-stbd https://t.co/E7yRRzzZJ5 pic.twitter.com/ItoHSmH9TO