if you like HalifaxShippingNews.ca, consider becoming a member. 2$ a month really helps cover costs, and in return you get the site Ad Free.  For latest port conditions, Including Weather,Wind, Tides, Arrivals and Departures be sure to visit the Port Report (Members get the information in realtime, not every 2 hours)

1. The Floggings will Continue..
the National Post reports on the case of 2 rival Pirate troupes who have a disagreement over the carriage of floggers.

2. Frigate Upgrades
Janes is reporting that DND is buying an additional decoy launcher for the stern of the the Halifax Class Frigates. the ships are already equipped with 2, one on each bridge wing.

3.Dead Tree.
I had an article in yesterdays Chronicle Herald. You can find it Online .  Continued updates on the grounding will be posted at https://blog.halifaxshippingnews.ca/2018/08/akademik-ioffe-runs-aground.html 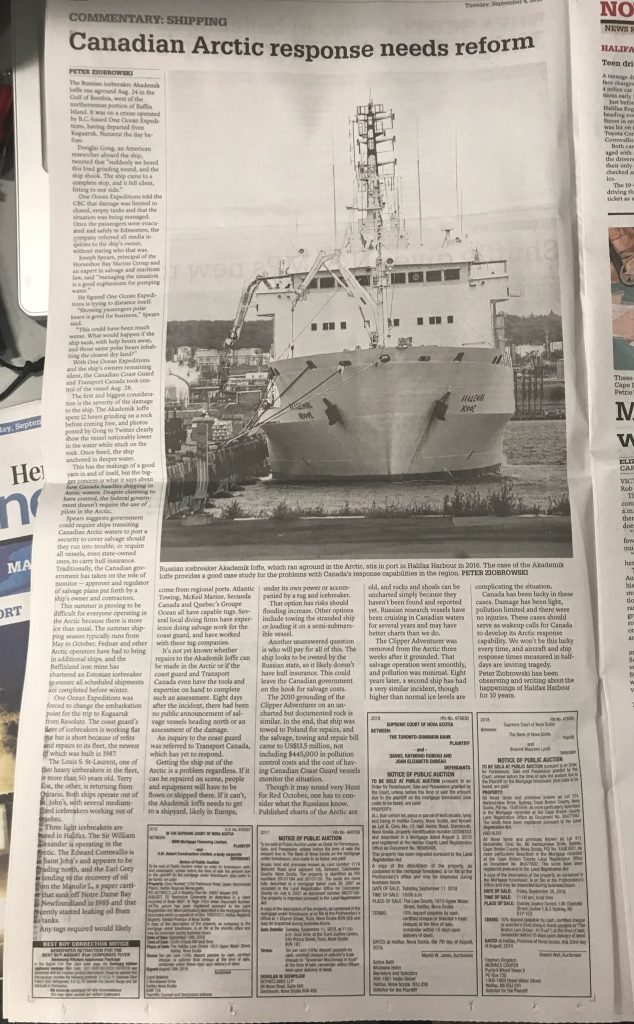 Bluenose is in Boston. HMCS Kingston returned from OP Nanook in the North. Cruise Ship Anthem of the Seas turned around off Herring Cove last week while outbound to drop off a sick passenger.

Sept 2, 1998 –  Swiss Air Flight 111 crashed near Peggy’s Cove, NS. All 229 aboard were killed.
Sept 1, 1985 – An expedition led by Dr Robert Ballard located the wreckage of TITANIC
Aug 30 1943 – HMCS Haida is Commissioned. She is now a Museum operated by Parks Canada in Hamilton.
Aug 29, 1942 – 1st course of 67 probationary ‘Wrens” for the newly created Women’s Royal Canadian Naval Service begins at Kingsmill House, in Ottawa.
Aug 27, 1960 – Replica of HMS Bounty launched at Lunenburg. She was built  for the MGM movie staring Marlon Brando. She Sank in a hurricane in 2012.