The Russian icebreaker Akademik Ioffe, operated for One Ocean Expeditions, ran aground in the Arctic on August 24. the ship left Kugaaruk, Nunavut, on Thursday the 23rd, before grounding in the Gulf of Boothia in the early afternoon Friday.

AIS tracks show the path of the Ship

JRCC dispatched Aircraft from Trenton and Winnipeg, but they arrived on scene 7 hours later. Coast Guard Icebreakers Amundsen and Pierre Raddison also responded, however the closest vessel was the Akademik Sergey Vavilov, also operating for One Ocean Expeditions. Passengers were evacuated by the The Passengers were taken back to Kugaaruk, then flown to Edmonton. Arriving on the 27th.

the Akademik Ioffe was refloated the day after she ran aground. Catherine Lawton, One Ocean Expeditions’s general manager told that CBC that “The hull damage was limited and contained to closed, empty tanks, which are secure from the rest of the ship,” Lawton said. “Those are actively being managed.”  Being managed is a subtle way of saying they are pumping water, meaning the hull is breached. 6 days after the grounding, the ship remains anchored away from the grounding site. The ships owners – the Russian Academy of Science, have yet to file a salvage plan, causing the Coast Guard and Transport Canada to take control of the ship August 28th in order to complete all required inspections and develop a plan to get the ship to its next destination safely

One Ocean has canceled the next 2 tours for the ship, and now that the passengers have returned home, refered all enquireies to the ships owners.

Among the people on board the ship when it grounded was researcher Dr. Donglai Gong who tweeted photos about the experience

When the Academik Ioffe ran aground yesterday we were in the presentation room for safety briefing. Suddenly we heard this loud grinding sound and the ship shook. The ship came to a complete stop and it fell silent, and listing to one side. We knew instantly that it was not good. pic.twitter.com/fdnYYze7jq

This is the Academik Ioffe when we boarded the ship the evening before on 8/23/18. Beautiful ship. Photo credit: @truedichotomy pic.twitter.com/PoDjCJumHQ

This is the Academik Ioffe when we all disembarked this morning. Notice that she’s sitting a good bit lower in the water. Canadian Coast Guard helicopter was on site with their vessel inbound. Photo credit: @truedichotomy pic.twitter.com/LoRxt2lerf

The passenger transfer from the Academik Ioffe to the Academik Sergey Vavilov this morning went smoothly. pic.twitter.com/2IM7S9OsHx

We have arrived at Kugaaluk aboard the Academik Sergey Vavilov and we are greeted by a beautiful sunset. Photo credit: @truedichotomy pic.twitter.com/BazncZRJQi

Yale also produced this Article about the Experience. In 2010, the Clipper Adventurer also ran aground on a Discovered, but uncharted shoal. the TSB released a report into that incident.

Updates to this story will be posted Here

Still no news. and inquiry to the Coast guard referred me to Transport Canada – who have not yet responded. A source told me he heard the vessel was surveyed yesterday by divers. 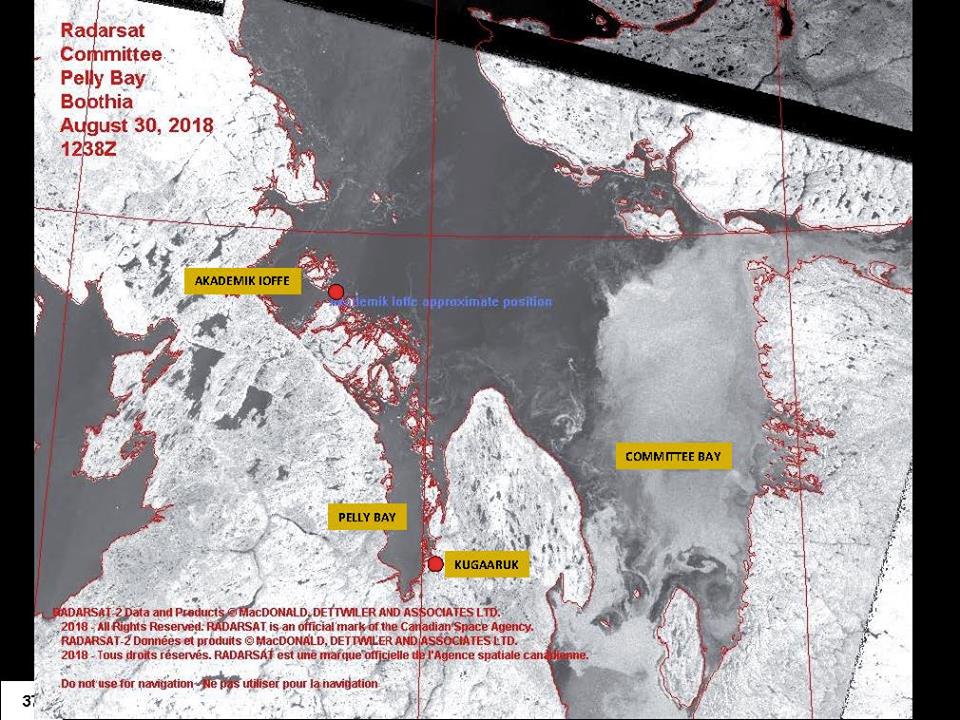 Note the Location of Nanisivik , in the top left corner of the Ice Chart below. Nanisivik is the site of the slowly under development permanent Arctic naval Base – and a perfect location to base an arctic response capability.

for the ship to leave the area, she will likely have to pass through the Fury and Hecla Straight, which is fully iced over. Additionally, the Louis St. Laurent, is headed to Bellot Straight to free the Claude Desgagnes

I also Have this Piece in the Chronicle Herald about the grounding and its response. 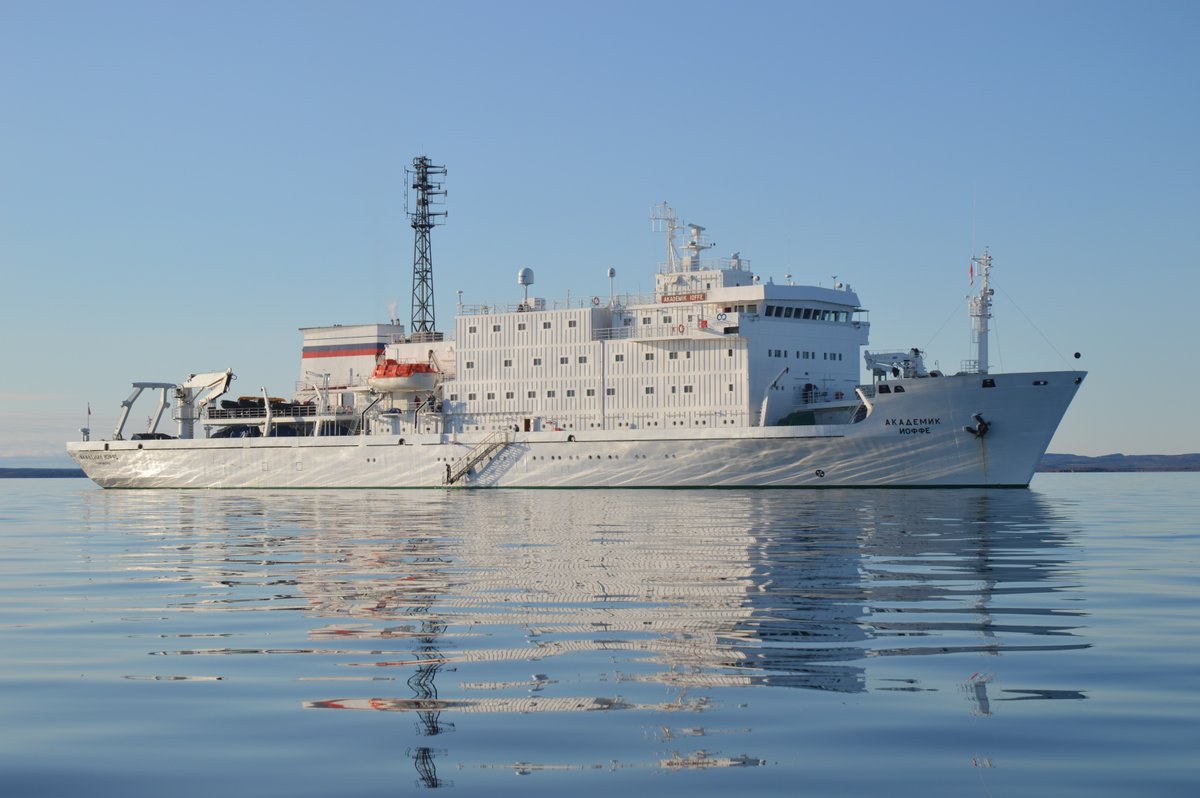 The TSB tweeted this photo (above), which seems to show the ship floating at anchor at close to a regular waterline. I hear the damage is relatively minor – there are  no big holes.

It looks like the Pierre Radisson was re-assigned. Her last position was in the Lancaster sound earlier today. There is now no government presence on site, unless TC has someone Aboard the ship. 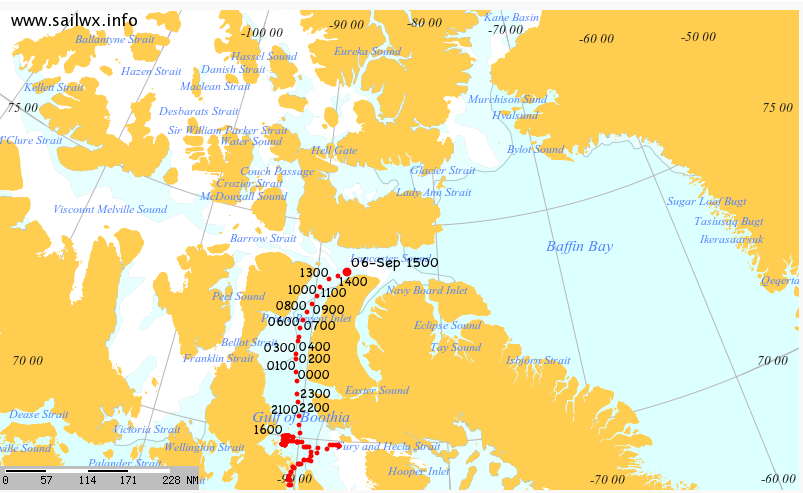 Update Sept 7
CBC is reporting that the RCAF response cost $513,000

It looks like the Ioffe has sailed, and appears to be Unaccompanied. AIS Data is showing that she has moved from her anchored position earlier today.

Update Sept 13:
Word is repairs are complete. she sailed for Kugaaruk, where she will meet an inspector – Presumably TC is Flying someone in. Once Cleared, she will head to Montreal.

Update Sept 17:
TC has cleared the Ioffe to sail, and she will be escorted through the Ice by CCGS Henry Larsen, bound for Les Mechins PQ, where Verreault Navigation has a large dry dock.

5 thoughts on “Akademik Ioffe Runs Aground in the Arctic.”