The Factory ship trawler Mersey Phoenix tied up at pier 9 last week for what looks to be a work period. The ship spends much of its time fishing for shrimp in Northern waters around Baffin island.

Fleetmate Mersey Venture was at Pier 9 in December, taking on supplies while waiting out bad weather.

On March 2, The F/V Atlantic Destiny Caught fire, with 31 persons onboard. Facebook posts seemed to indicate that the engine blew up, which was the cause of the fire. The fire was extinguished by the crew, but the vessel was then found to be taking on water, and a Mayday issued at 20:10.

The RCAF deployed a Hercules aircraft, which parachuted a SarTech to the stricken vessel, and a CH-149 Cormorant Helicopter, Both based at 14 Wing Greenwood.

Winds were reported to be 55Knots, and 30′ seas at the time. The CCGS Cape Roger also responded, as did Clearwater fishing vessels Maude Adams and Cape LeHave.

The CH149 also delivered a second SARTech, who along with 4 remaining crew worked to dewater the vessel. as of 00:30 the ships generator was operating, and the pumps running. By 8am, the decision was made to cease de-watering efforts, and the remaining 4 crew and 2 sar Techs were transferred to the CCGS Cape Roger. The F/V Atlantic Destiny sank at 10:36am.

The F/V Atlantic Destiny was built in Denmark in 2002, and is a scallop factory freezer vessel, owned by Ocean Choice International of Newfoundland. It sails out of Riverport N.S, and is staffed by two 30 person crews who rotate 3 week stints.

There will be much speculation into what happened. The Vessel was the subject of a TSB investigation after a March 2017 incident that led to main engine failure. The report indicates that the ship had a history of engine shutdowns.

This post is an updated version of the live twitter thread i have been maintaining about the incident.

JRCC has confirmed that the fishing vessel CHIEF WILLIAM SAULIS owned by YARMOUTH SEA PRODUCTS LIMITED. is the missing vessel. it’s a 2004 built 50′ fiberglass boat. There were 6 persons on board. The boat fishes scallops.

An Epirb was detected this morning at 0551 AST. RCAF C-130 and CH149 Cormerant were dispatched from Greenwood, as well as CCGS Courtney Bay & CCGS M. Perley tasked to search. Debris was spotted at 0822AST, including two liferafts on the beach. both were empty. GSAR and RCAF crews are continuing to search.

Weather observed at the West Bay of Fundy ODAS Buoy at the time of the EPIRB activation shows 1.7m waves, with winds from the North West 26knots (50km/h), gusting to 33knots.

The Fishing Vessel Guess 2 also ended up on the beach at the Yarmouth Bar. the crew escaped unharmed.

UPDATE: Sir William Alexander has been tasked to the Search. hearing second hand reports that witnesses may have seen an explosion.

UPDATE: a CP140 Aurora has joined the search earlier this evening.

UPDATE:23:00 JRCC is reporting that 1 body has been recovered, and next of kin notified.

The Factory shrimp Trawler Mersey Venture Pulled into Pier 9. A rare caller in Halifax, the ship works the arctic shrimp grounds off Greenland.

This past week brought the return of the Herring fleet to Halifax. So far, only 3 vessels have tied up, but more may follow. 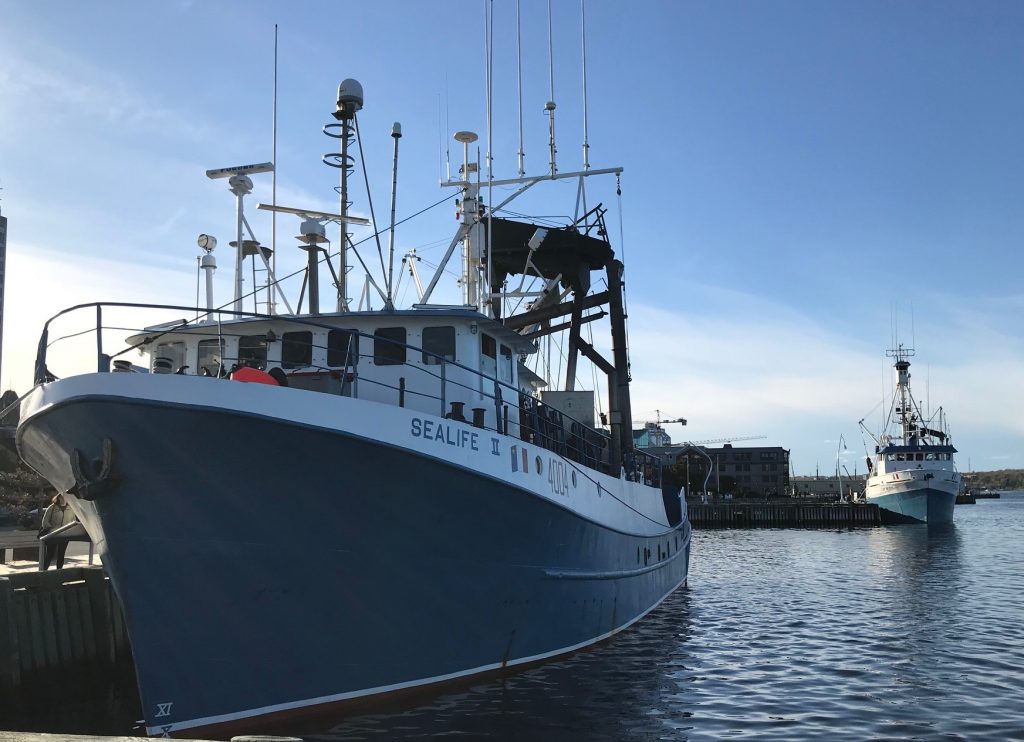 the annual return of of the fishing fleet is in full swing, with various vessels tying up throughout the harbour. The signers fish herring, and follow the schools of fish, operating out of Halifax for May and June.

With the Arrival of the Largest Container ship todate, a tall ship at anchor, and A US Aircraft carrier all showing up in recent days, its easy to forget other actions still happen daily in the port. 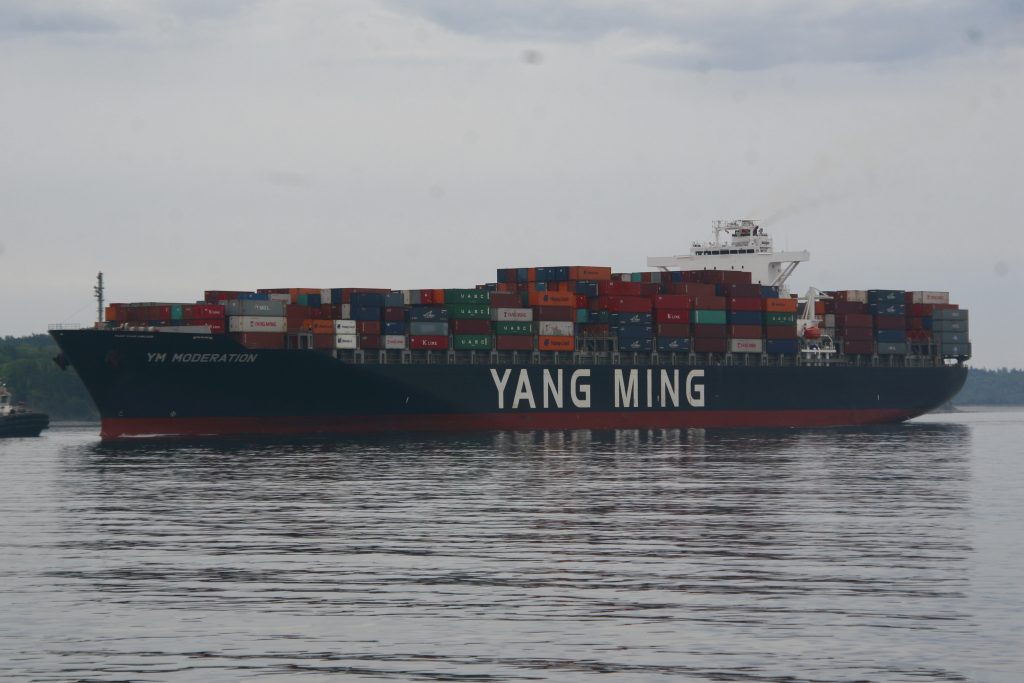 (Above)YM Moderation Put in for the Alliance. The Car Carrier liberty tied up at autoport, and then Moved to Pier 31. 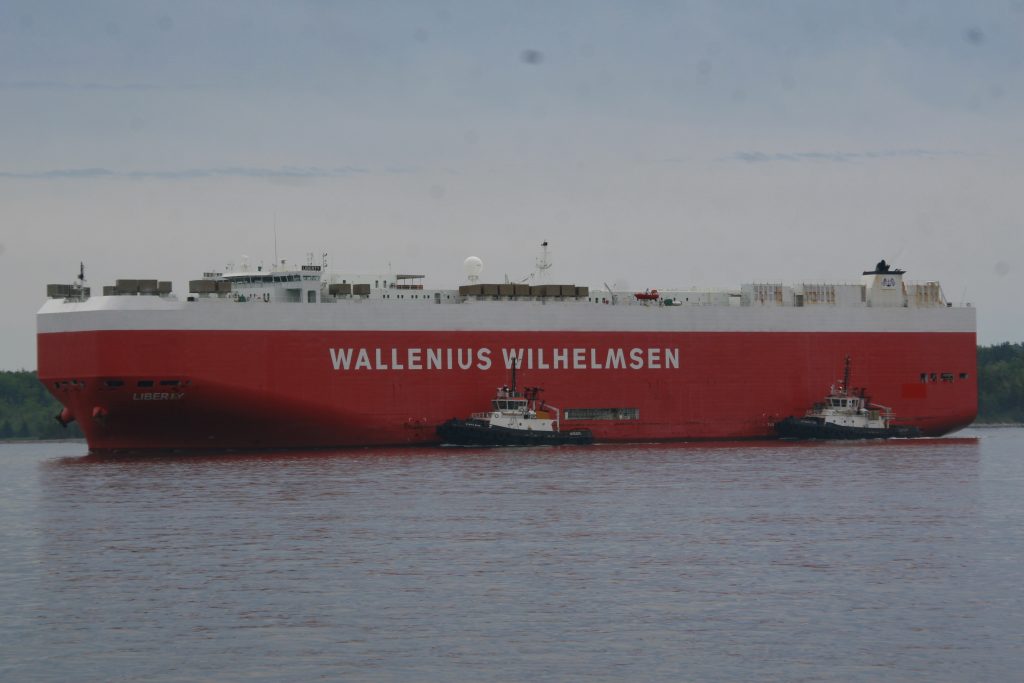 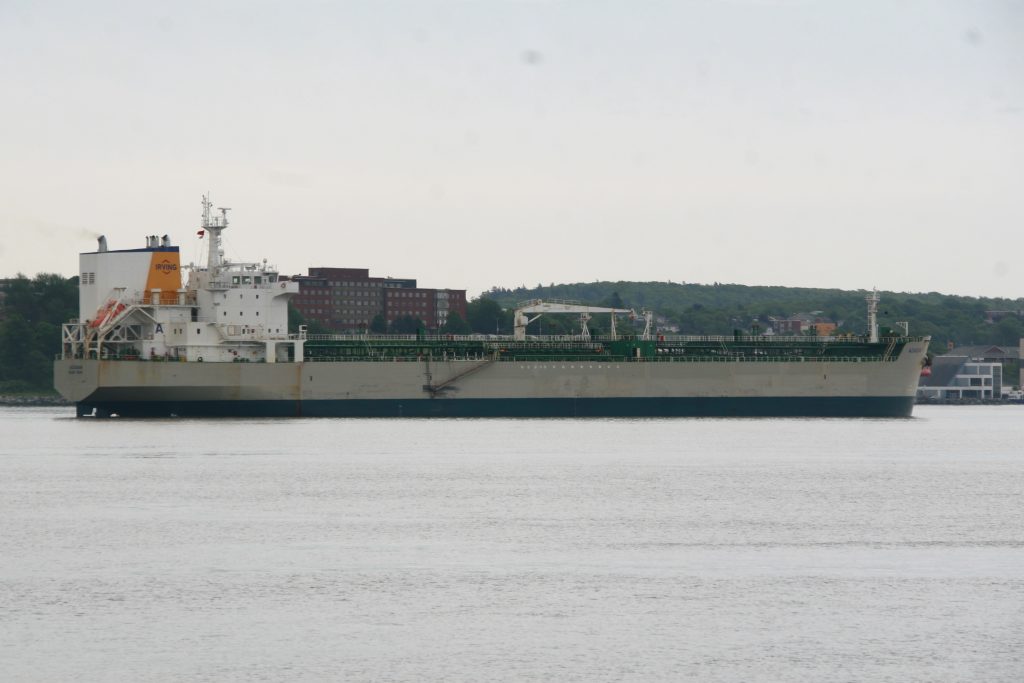 (Above) Acadian sits at anchor waiting to tie up at the Irving Oil wharf. (Below) Atlantic Pegasus departed imperial oil for Sea. 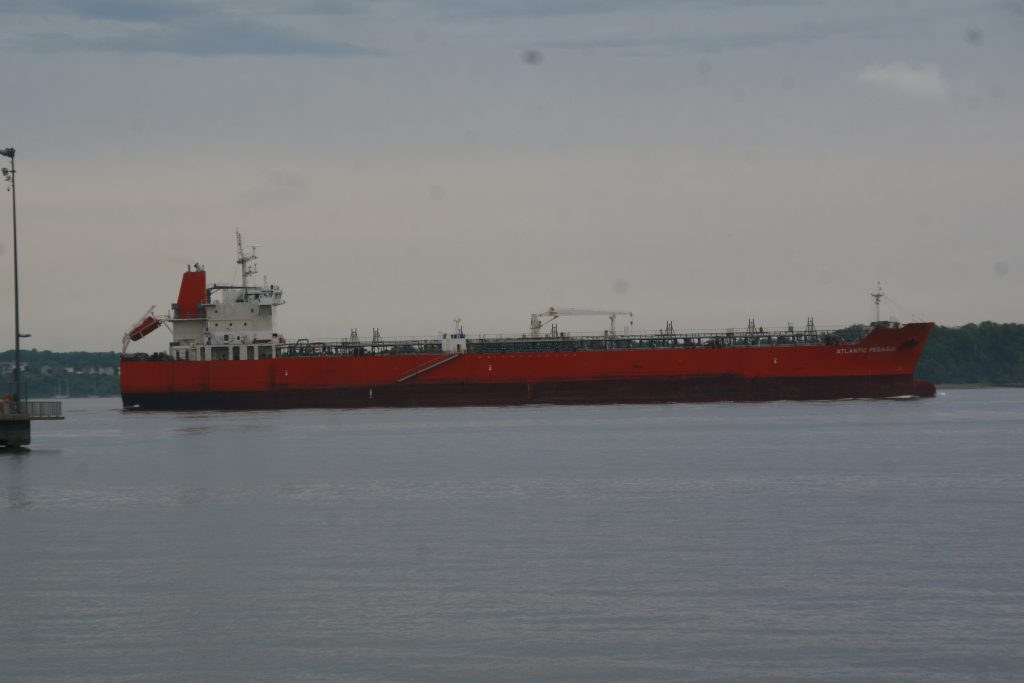 Golden Oak Fixed an issue at anchor, and then proceeded to Imperial Oil. 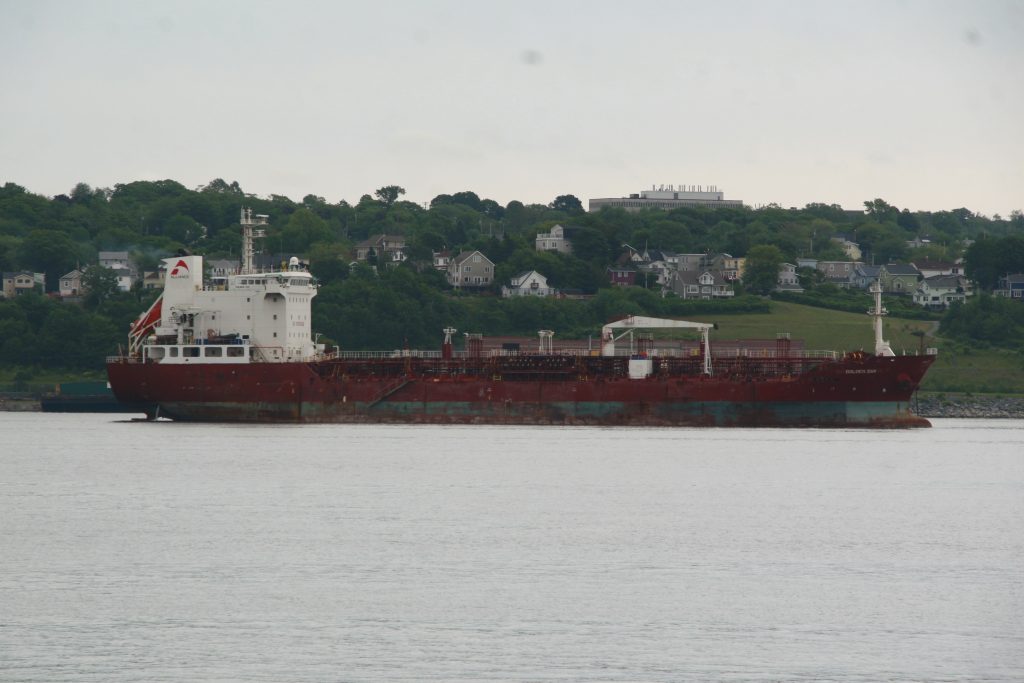 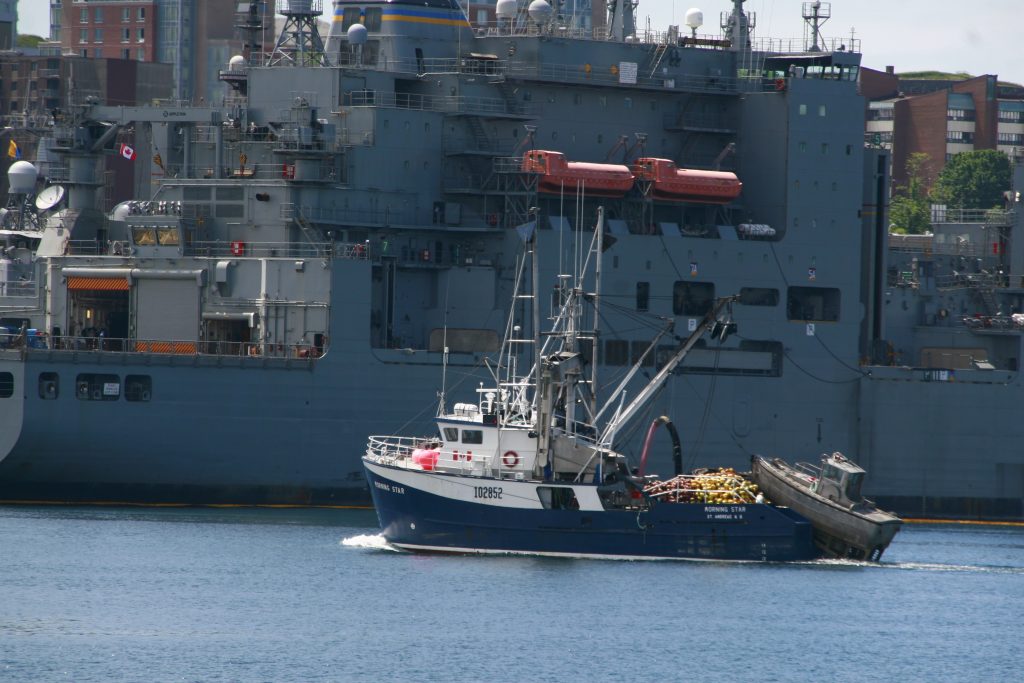 (Above) The herring Fleet is Still in town, with the morning Star Transiting. (below)The Vera D Arrived just ahead of the ZIM Antwerp, but got out of the way. 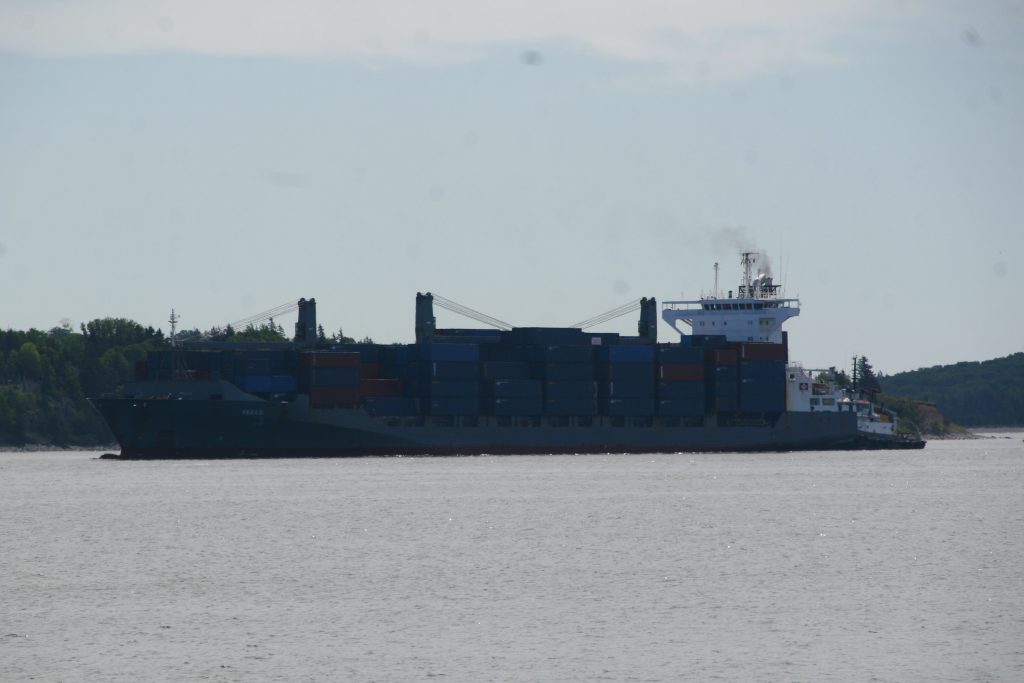 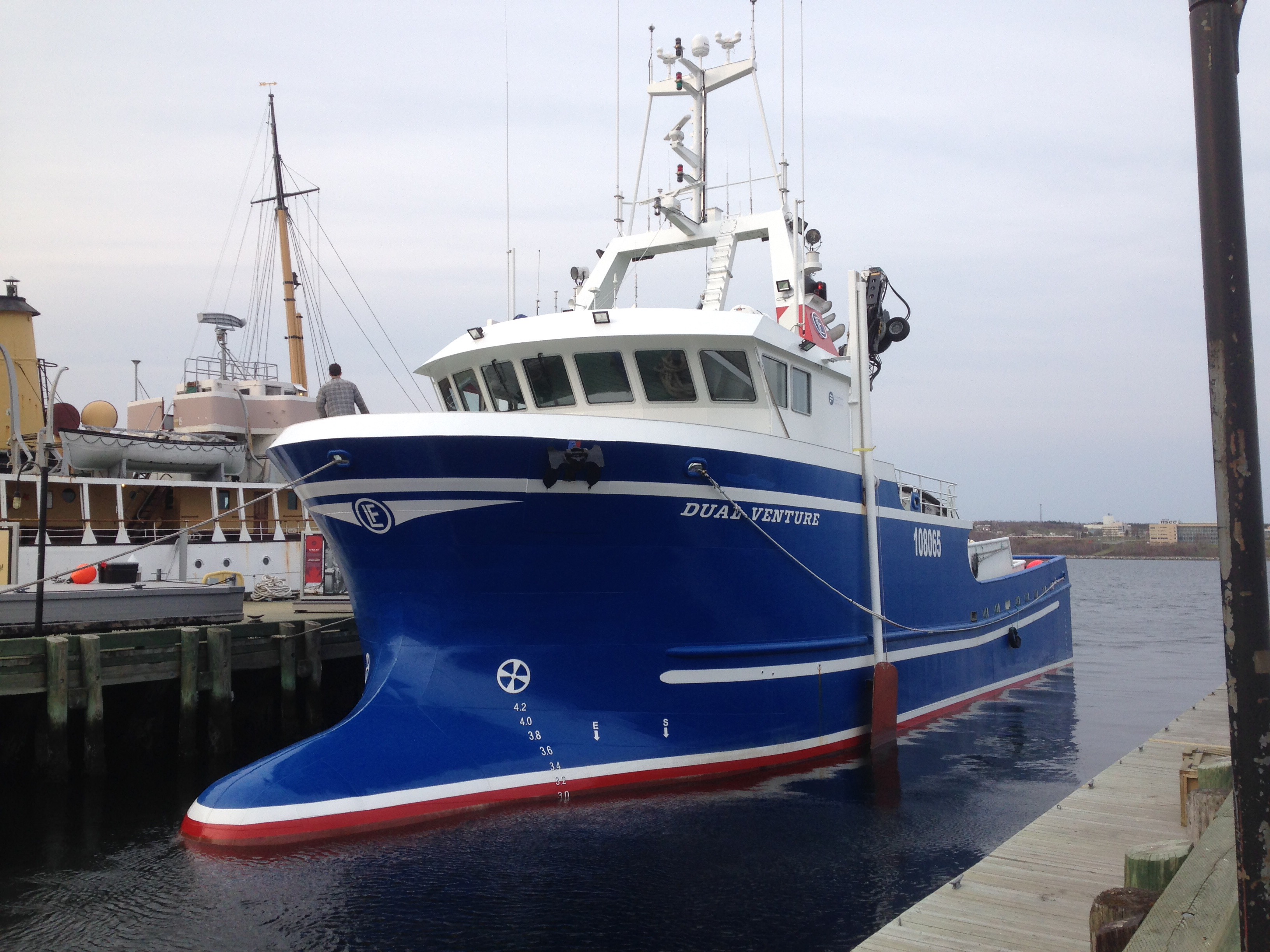 The herring fleet started arriving earlier this week. First off was a new “dual venture” with Lady Mellisa and Margaret Elizabeth no1 arriving today. 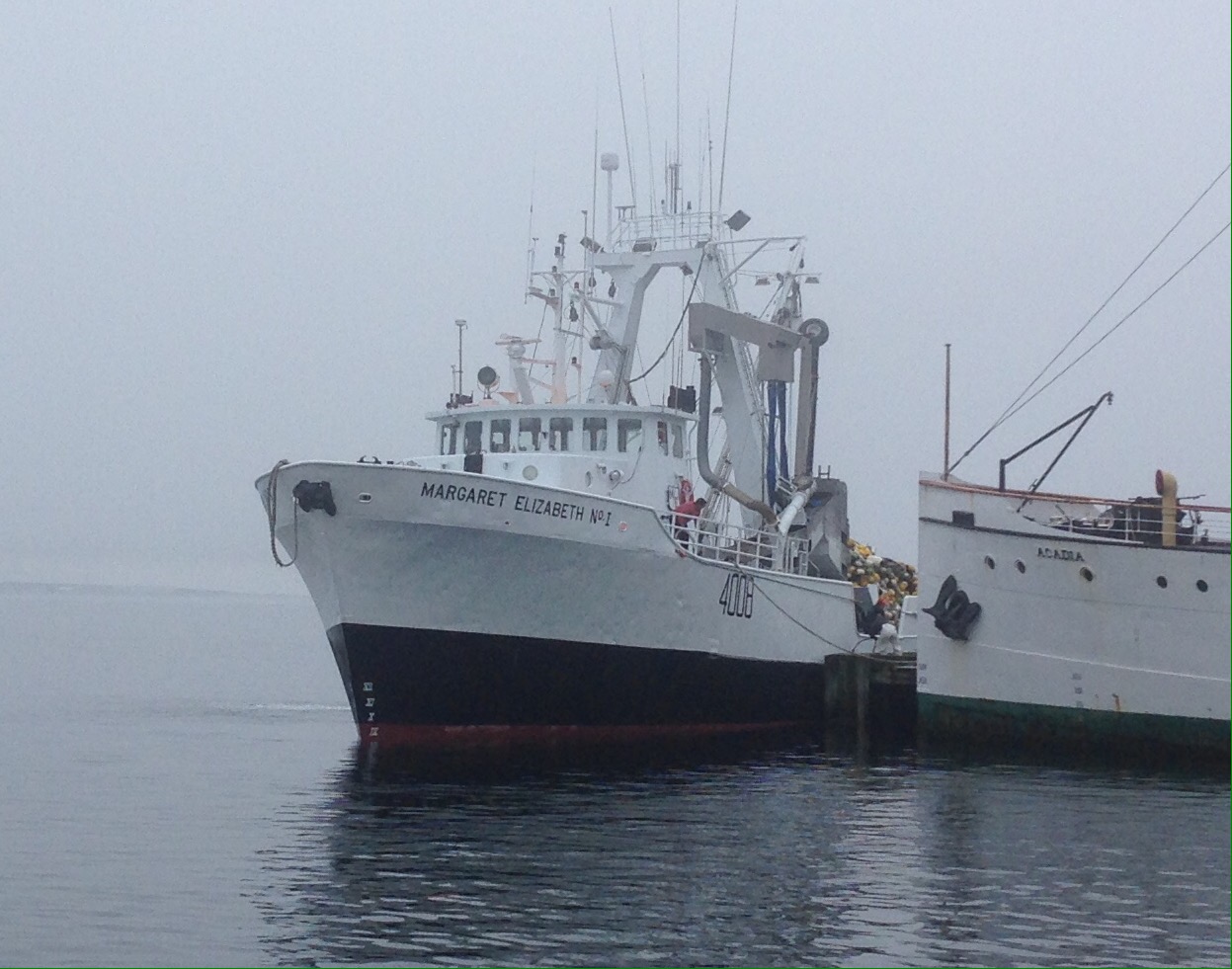 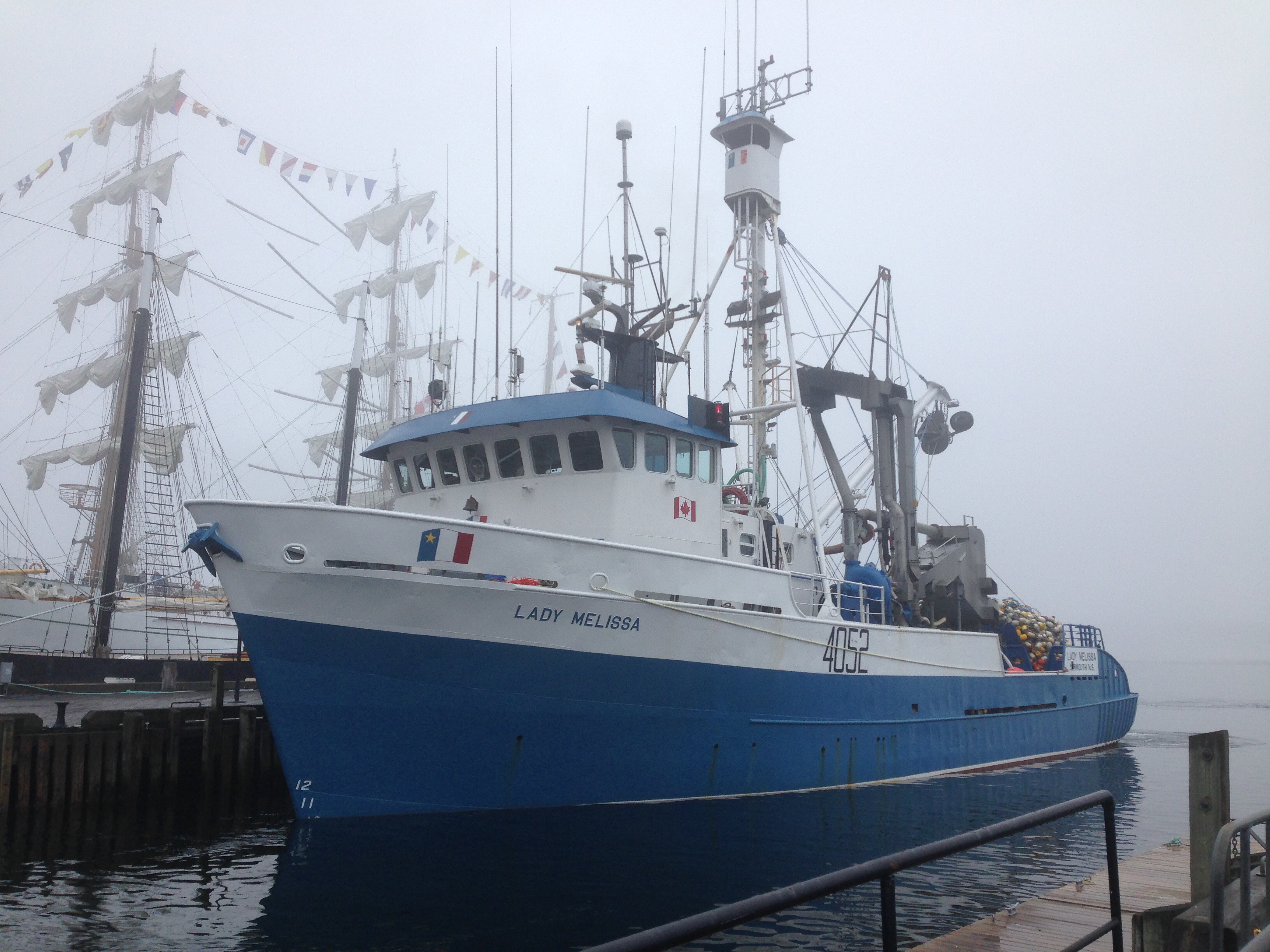 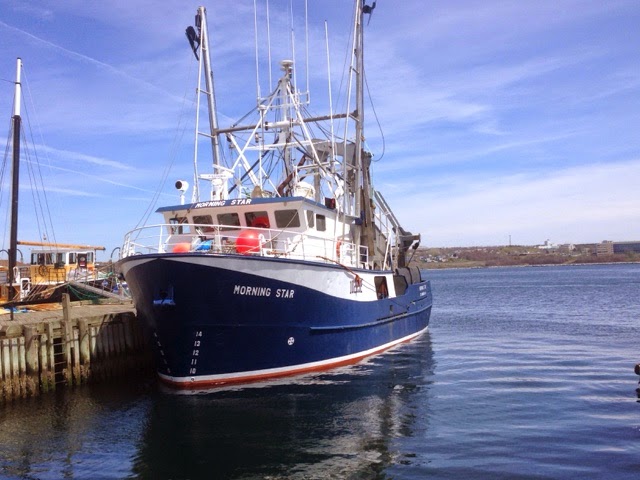 May brings the annual return of the herring fleet. Most of the usual vessels are back with the addtion of a new vessel has shown up this year, pictured below. 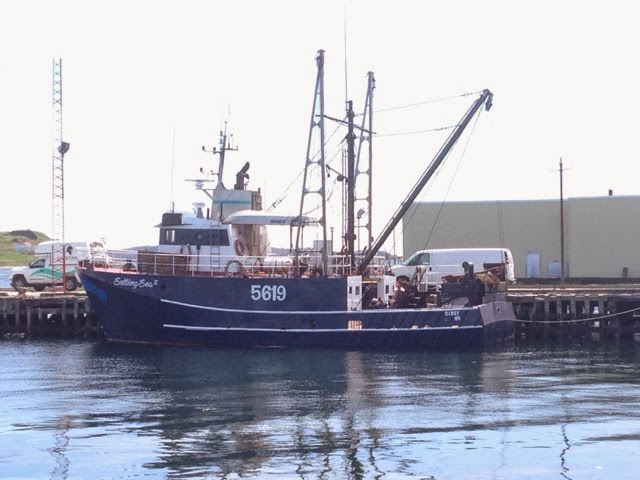 Herring are caught via a Purse Seine. A net is pulled around the school of fish, the bottom pulled tight, which forms a bowl out of the net, and then the fish are pumped into the fish hold on board. 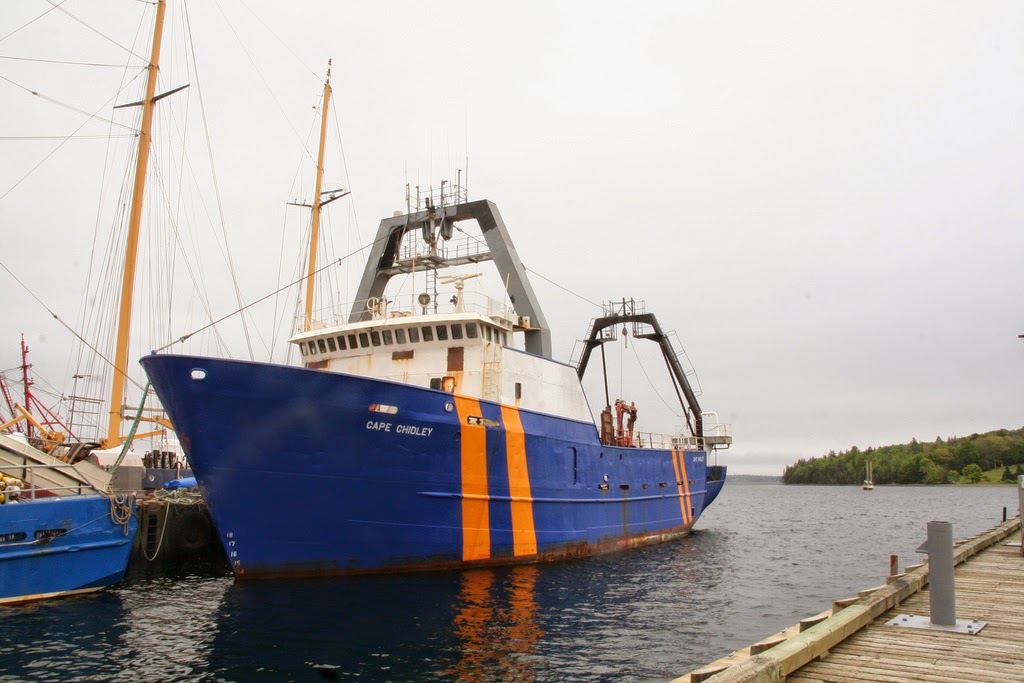 Fishing Trawlers end up getting converted to all sorts of stuff. Take Cape Chidley. Built in Pictou in 1976 as the Esther Boyd for Canso Seafood, She fished until 2001, and was laid up in Lunenburg in 2009. Her Surveyed market price was $225,000us.

She evidently found a Buyer, As she is now the M/Y Yacht Hop, and configured as a transport yacht from the Caribbean to French Riviera by a Frenchman. 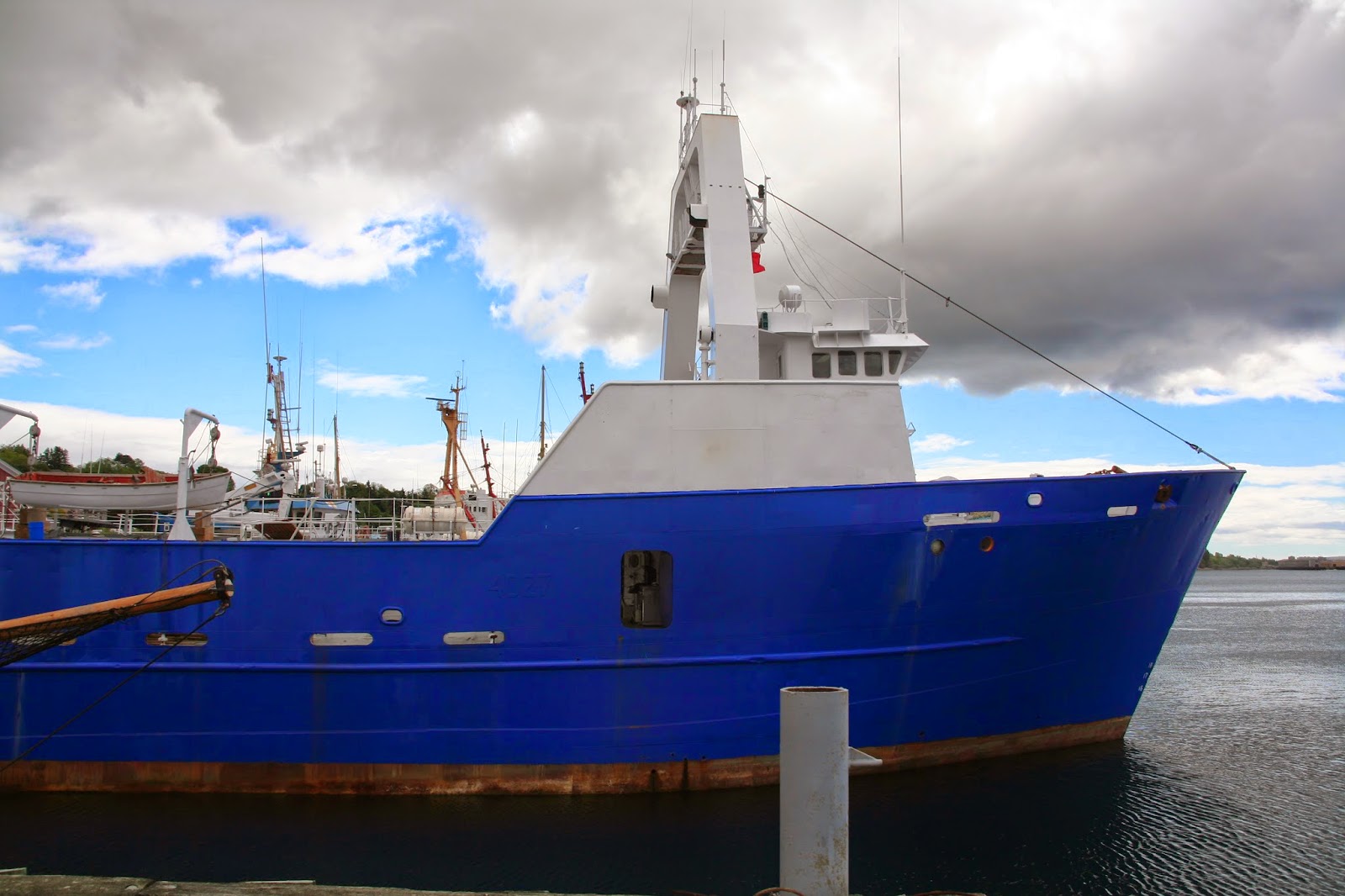 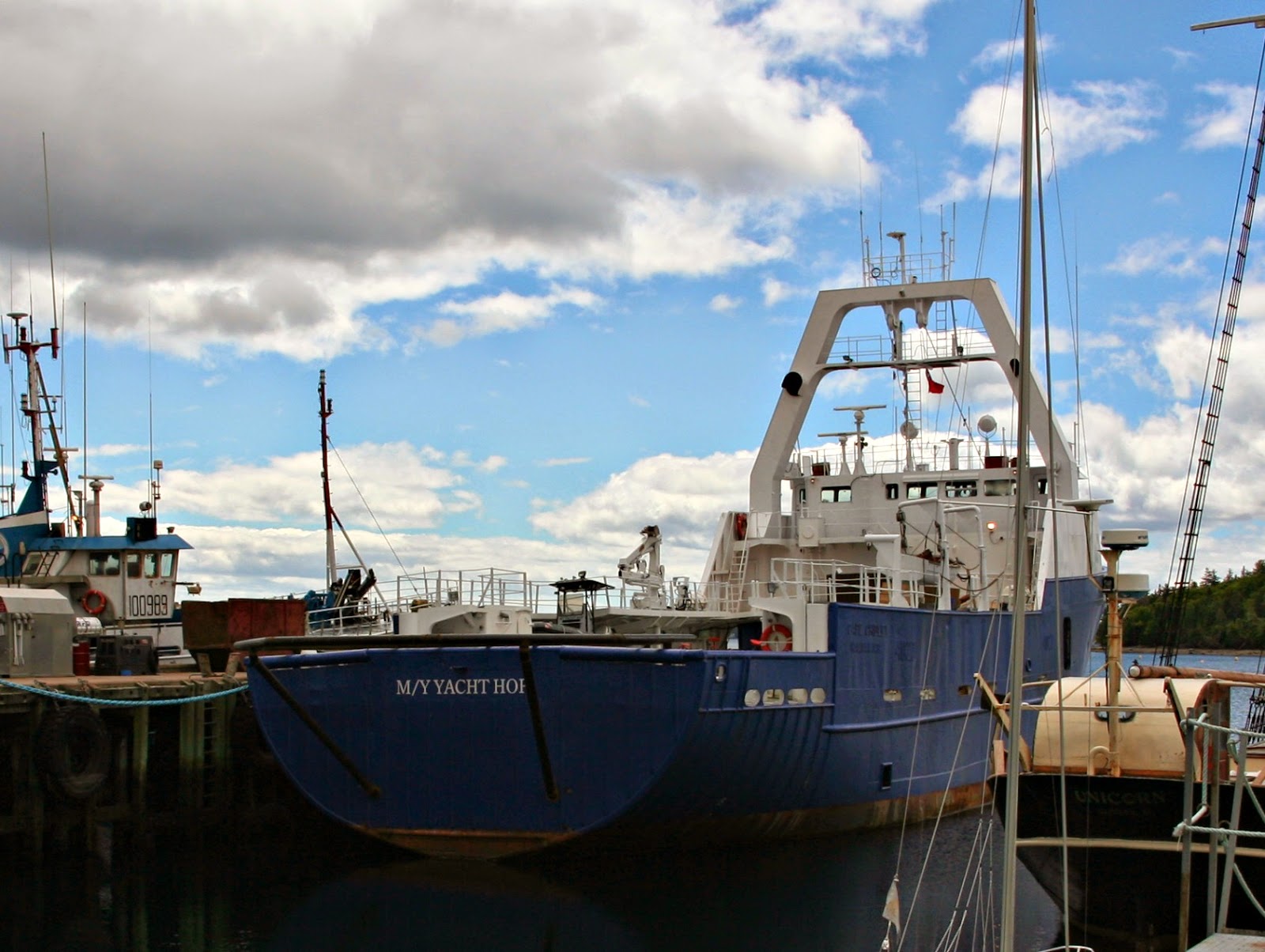