Boa Bison and Boa Barge 37 arrived this morning for the shipyard. The Tug took bunkers, and is expected to sail this afternoon. The barge is on long term charter to the shipyard, for use as a lunching platform for the AOPS vessels currently under construction. 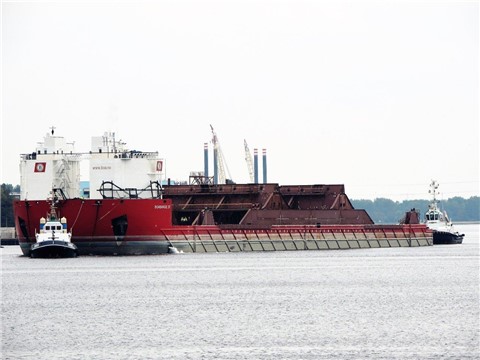 Thanks to Mac over at Shipfax, We now know that the Halifax Shipyard has chartered the BoaBarge 37 for a period of 4 years. the Barge will be used to launch the AOPS vessels currently under construction. The barge departed Rotterdam yesterday under tow of the Boa Bison, and is Due April 17.

The plan for ship launches is to move the ship onto the barge, tow the barge to the Basin, and submerge it, floating the new AOPS off. 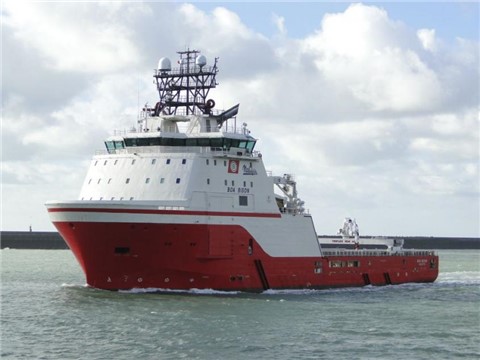 Appearing to be loaded, and arriving from Texas, the Articulated Tug and barge Genesis Victory / GW6506 likely is waiting in the basin to offload at one of the terminals in Halifax. there are currently 6 Oil terminals in the Port. the First is the Tufts Cove Power plant, the Second is Wilson’s Fuel at Pier 9.

Irving has revamped their wharf at woodside, and is now accepting their own product. Imperial oil is still operating their terminal on the refinery site, McAsphalt industries operates a wharf in eastern passage to accept liquid asphalt products, and Valero has their wharf in Eastern Passage. 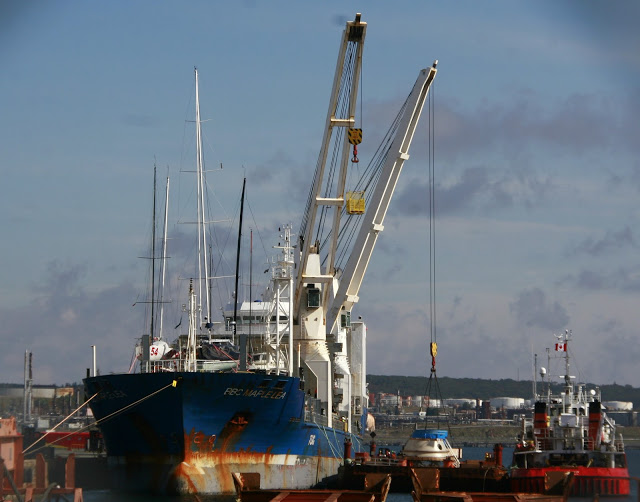 Note the BBC Maple Lea is also carrying a large deck load of Yachts near the Bow. She also earlier offloaded some fabrications onto trucks. 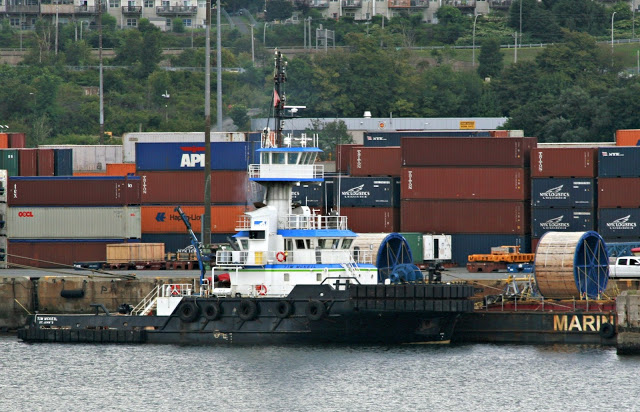 The tug Tim Mckeil spent the weekend with a barge at Fairview Cove. They appear to be handling spools of some sort, which have been at the west end of the dock for several days now. Both were gone by last night, presumably to clear space for todays arrivals of Yantain Express and Tokyo Express.

Due tonight is the tug Ocean Arctique. The tug is tandem towing two barges, abys and timberland to be used by American Bridge co. For the big lift.

The tug was finished at the Halifax shipyard, and the barge timberland was owned by the yard until it was sold in 2008.
The tow has been slow, not making more then 6 knots, and only 2 for most of the day. The tug and tow are due to tie up at pier 9. As of midnight they had reached the pilot station

UPDATE: they did not come in last night. Now due to try again Noonish.

UPDATE: They picked up the pilot at noon, and  finally made Anchorage 1 by 2:30. here the tow was separated, and the barges moved to the Cherubini wharf. Above, Lady Shirleen and Belle D from RMI Marine are moving the Ocean Abys, Timberland is still in tow of Ocean Arctique

The Mckeil tug Lois M arrived over the weekend with the Barge Nunavut Spirit.
The tug has been working with the Hebron offshore project, and is likely here to pick up parts from Cherubini in Dartmouth.

The Tug was Built in Japan in 1991 as Lambert, and was Acquired in 2013. She is built to the same basic design as Beverly M1, Another tug acquired by Mckeil a year before, and a 2 time visitor to Halifax.

The barge Nunavut Spirit was built in Portland Oregon in 1983 as a single hull tank barge, but was converted to a flat top in 2008. she is 116m long and 32m wide, and is also owned by Mckeil.

Both Tug and Barge are registered in St. John’s Newfoundland. 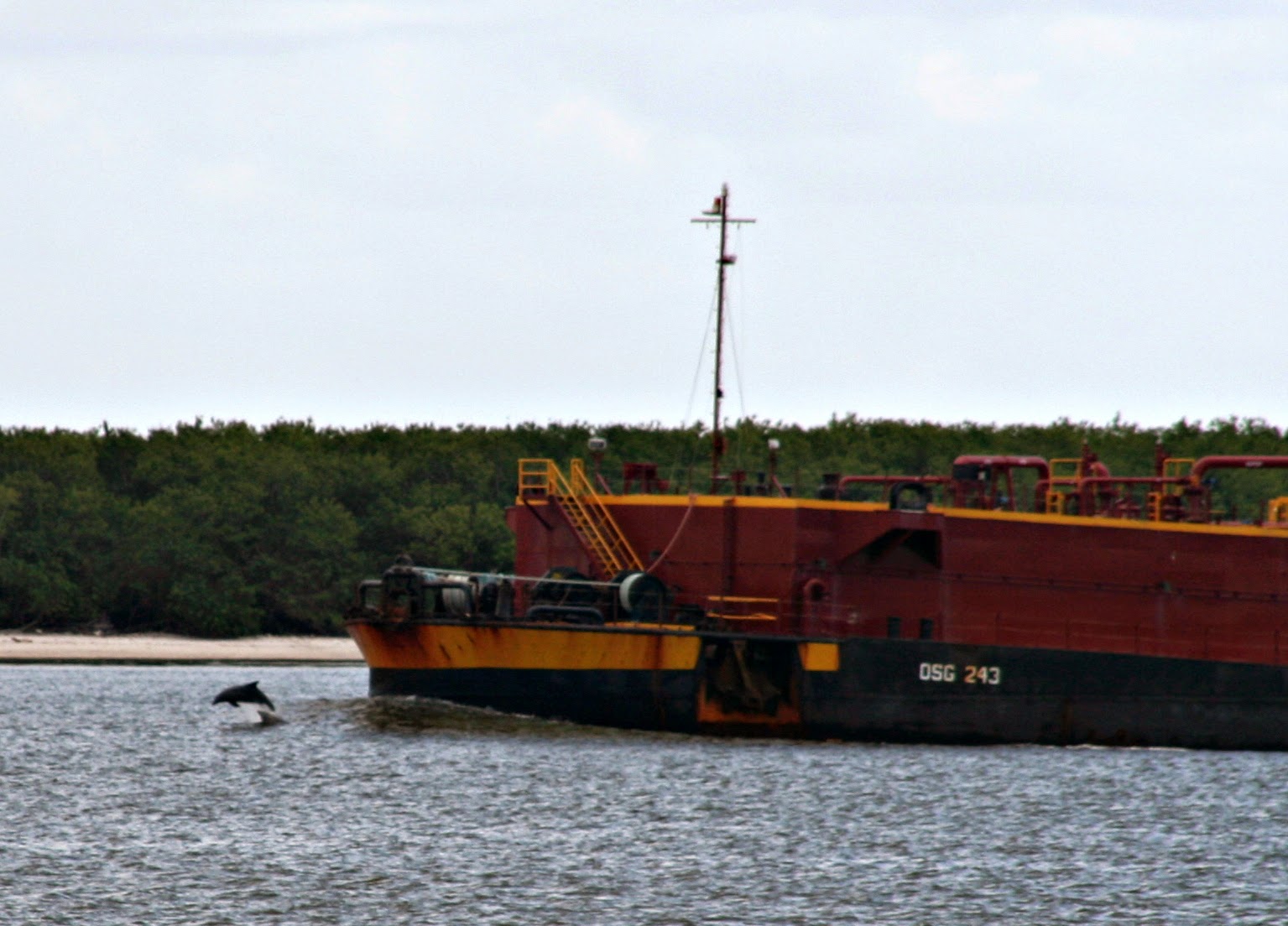 Today Brought about a Florida Aquarium Shipspotting Dolphin watching cruise. The dolphins were found playing in the bow wake of the Articulated tug/barge OSG Independence/ OSG243. 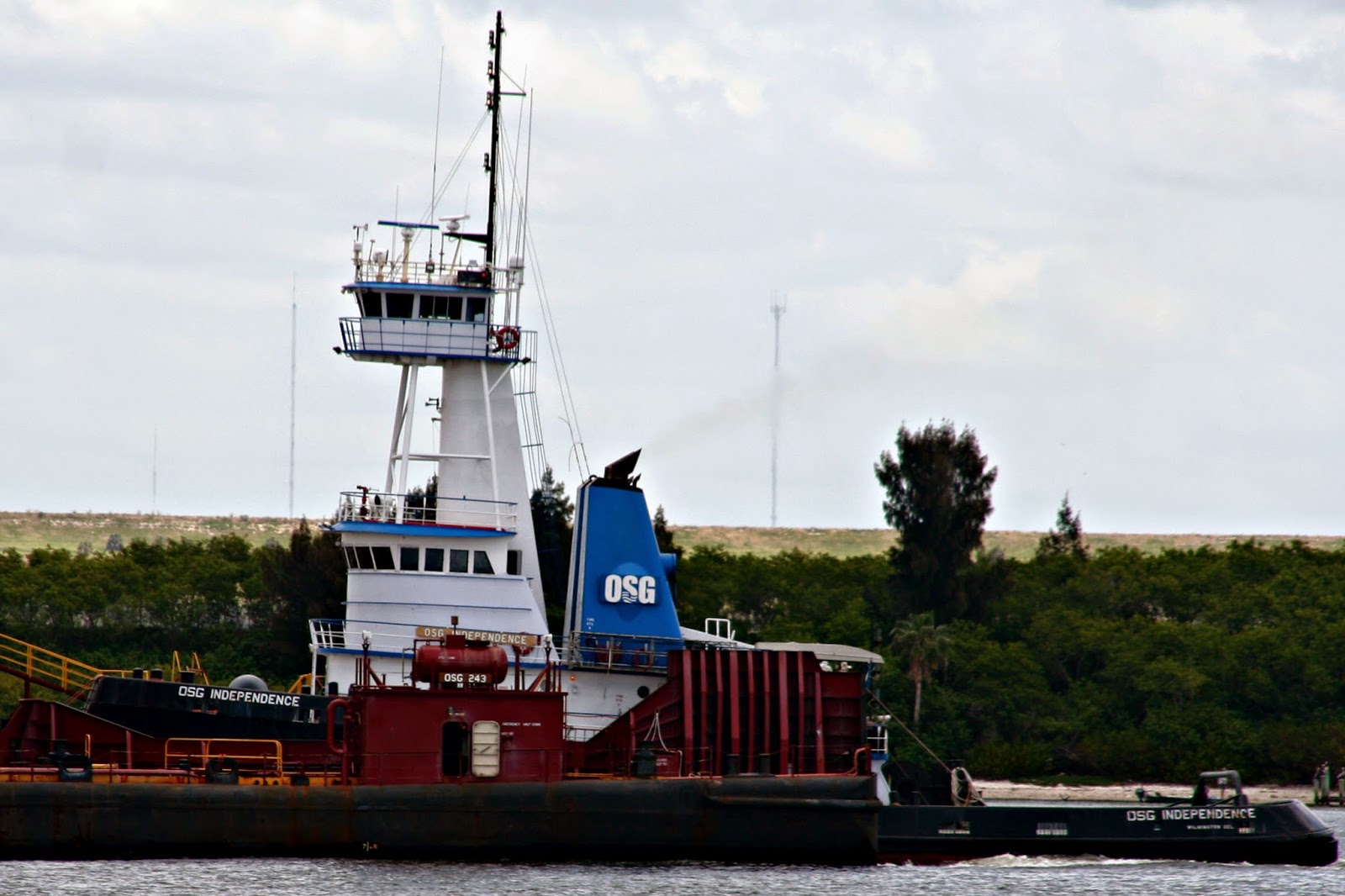 (Above) Close up of the Tug (Bellow) Full view of the whole unit. 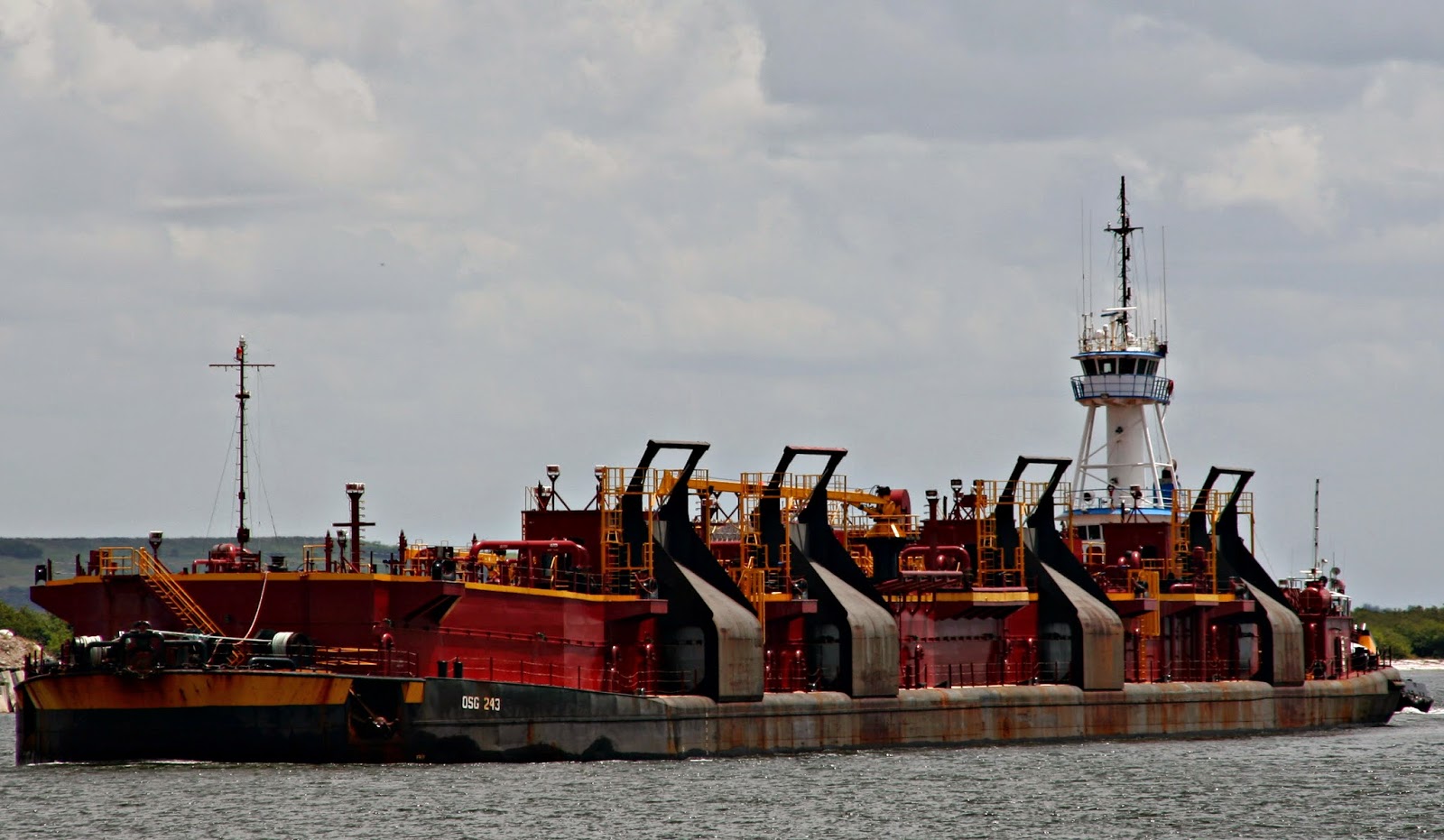 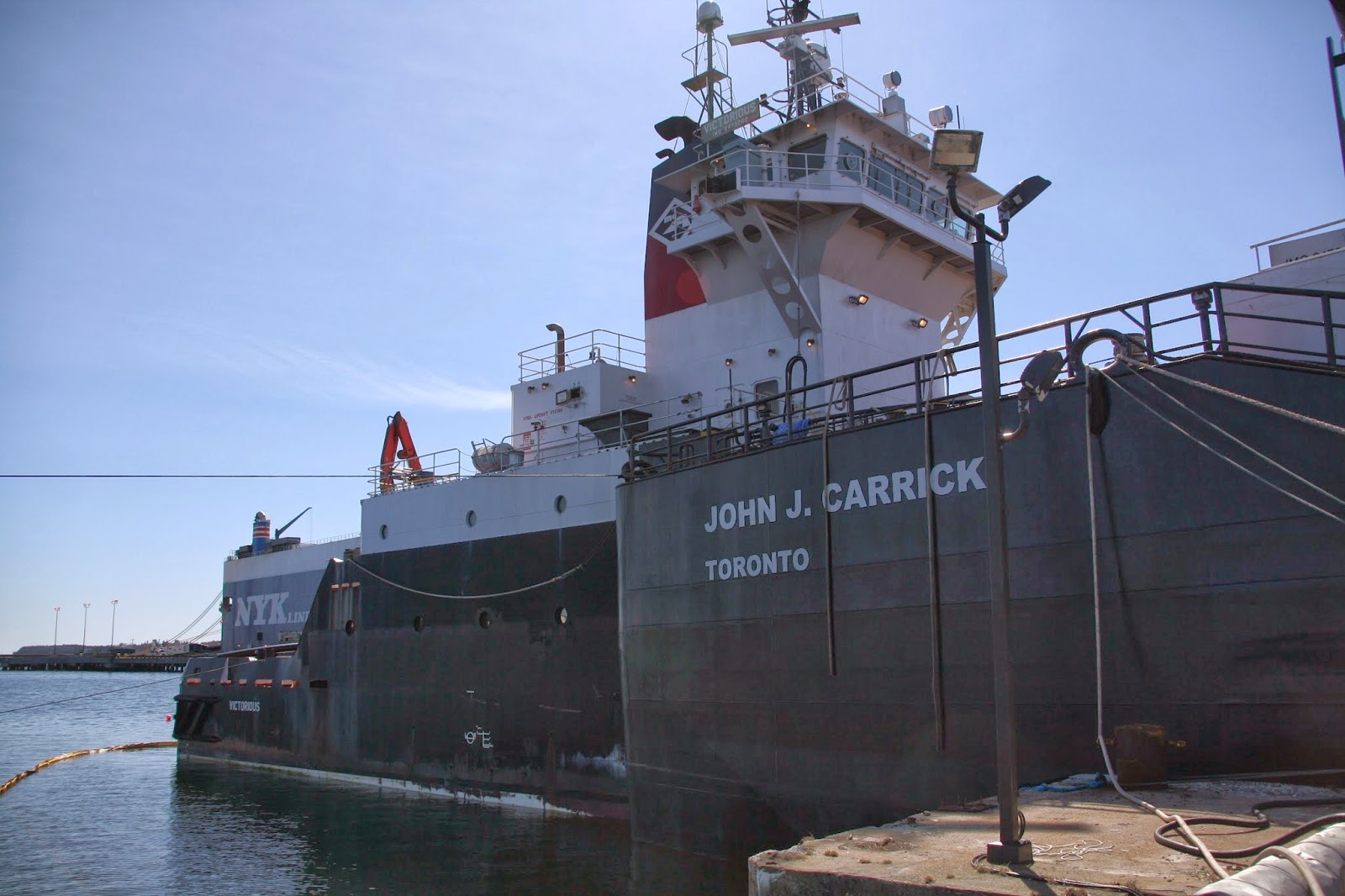 The Articulated Tug And Barge Victorious with John J Carrick have been frequent visitors to Halifax over the years. Typically they are delivering liquid Asphalt to the McAsphalt Dock in Eastern Passage. This year, they spent the winter in halifax, arriving on January 23rd. They served as a supply base for their sister company Stirling Fuels. Stirling Marine Fuels chartered the Algoma Dartmouth from Algoma, and is operating the Bunkering Service in Halifax, since imperial oil shut down the refinery, and announced they would no longer be importing Bunker C Fuel. The long term plans are unknown at this point, but the barge has enough oil left to fill Algoma Dartmouth one more time, and will then head back to the great lakes, presumably after the 31st when the seaway re-opens.

I was able to get in touch with the Captain, and after clearing it with head office, I was able to Get a Tour. So thanks go to both.

Looking out across the Deck of the John J Carrick, Take a Moment to notice how clean it is. I spent 45 minutes aboard, and my hands end up dirtier after paying for gas. 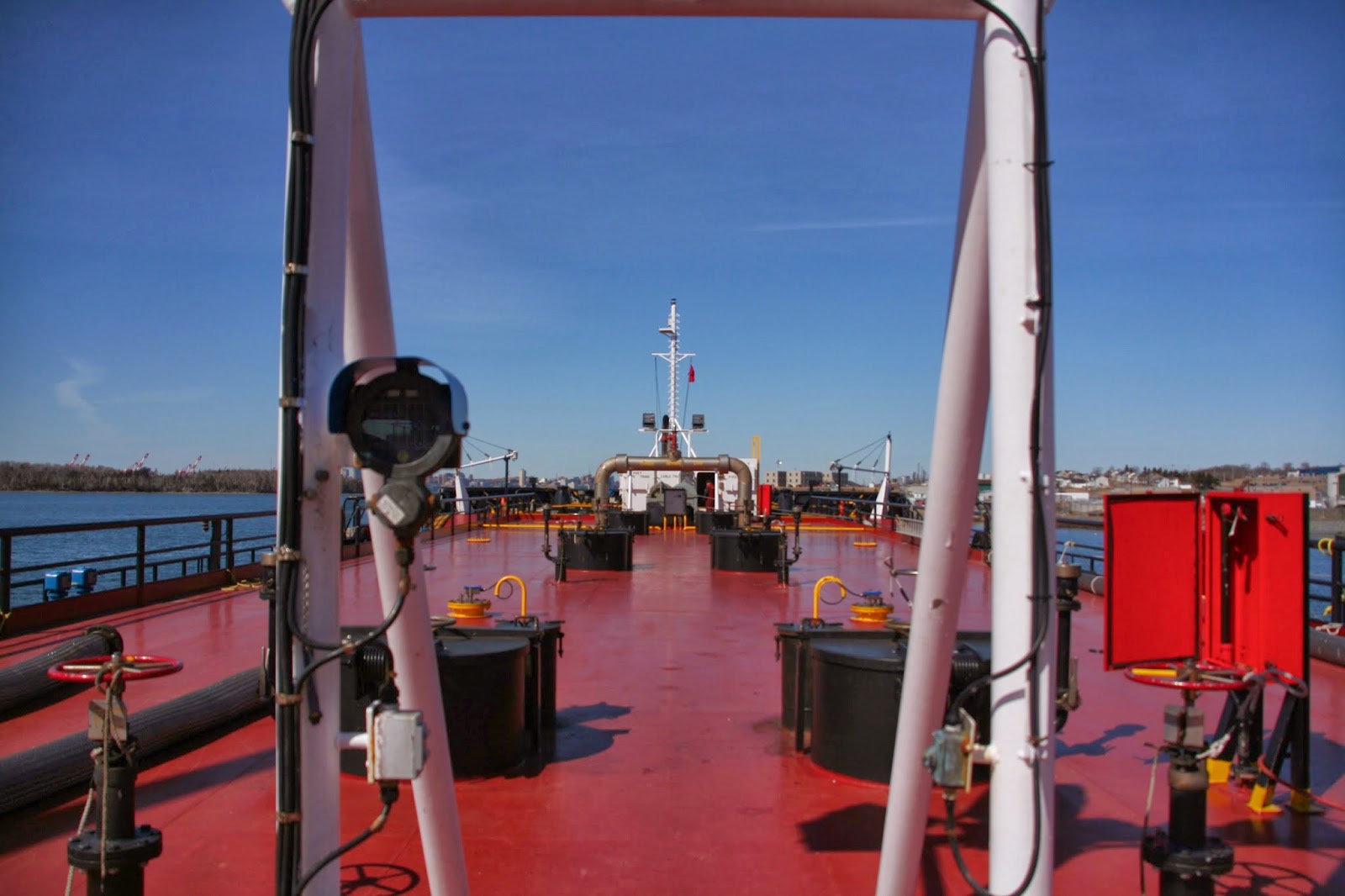 Looking across the deck, the John J Carrack has 12 tanks, 6 port and 6 starboard. she is capable of carrying 11000 tons of product. compared to other tankers she is relatively simple as she is only equipped to handle one commodity at a time. The hatches protruding allow access to the tanks for cleaning, maintenance and sounding. At the stern of the barge, are 2 pump rooms, and an engine room that contains heaters to warm the product so it flows. 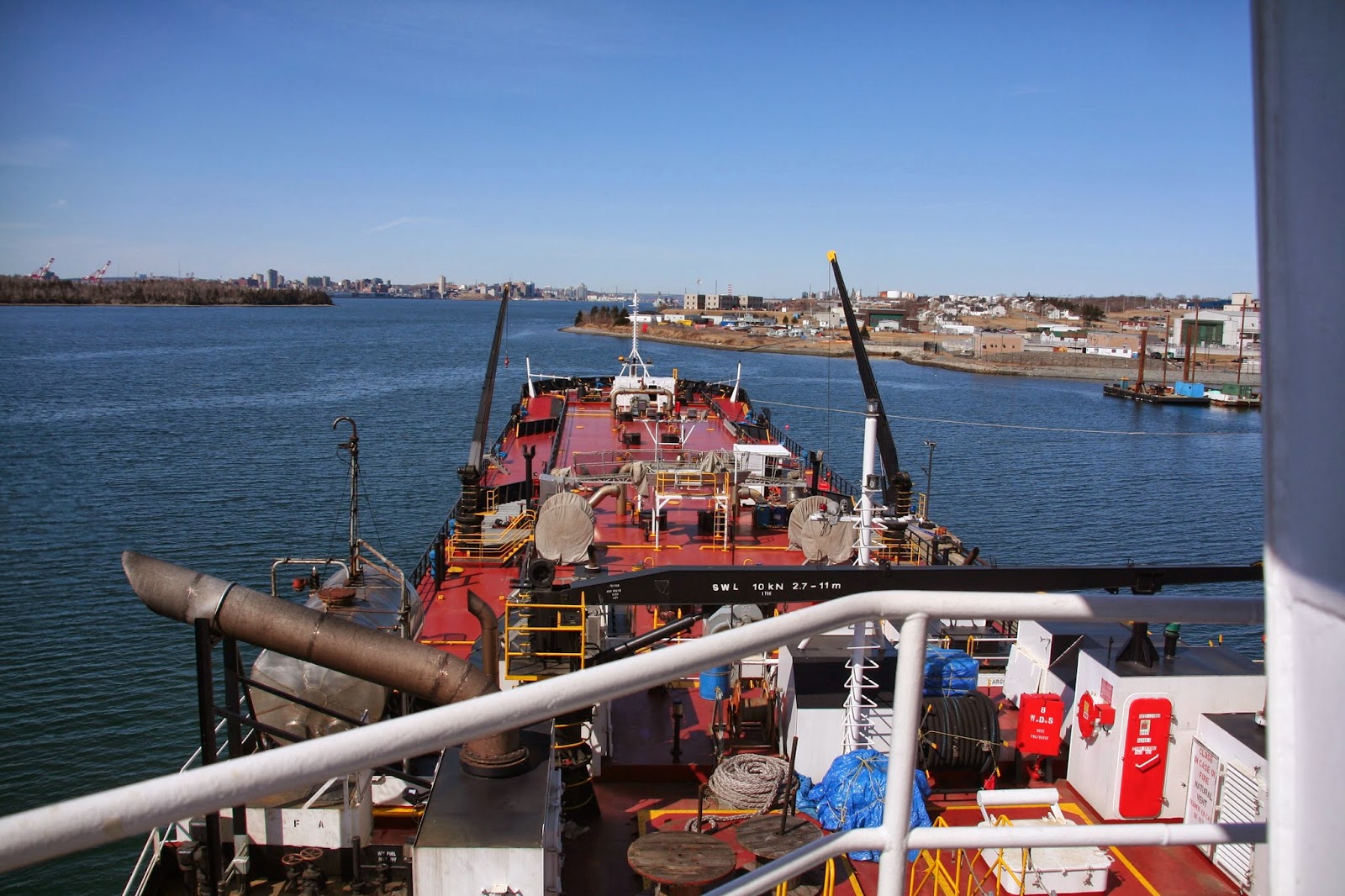 (Above) View forward from the bridge wing. (Below) the tug inserted in the notch from the barge 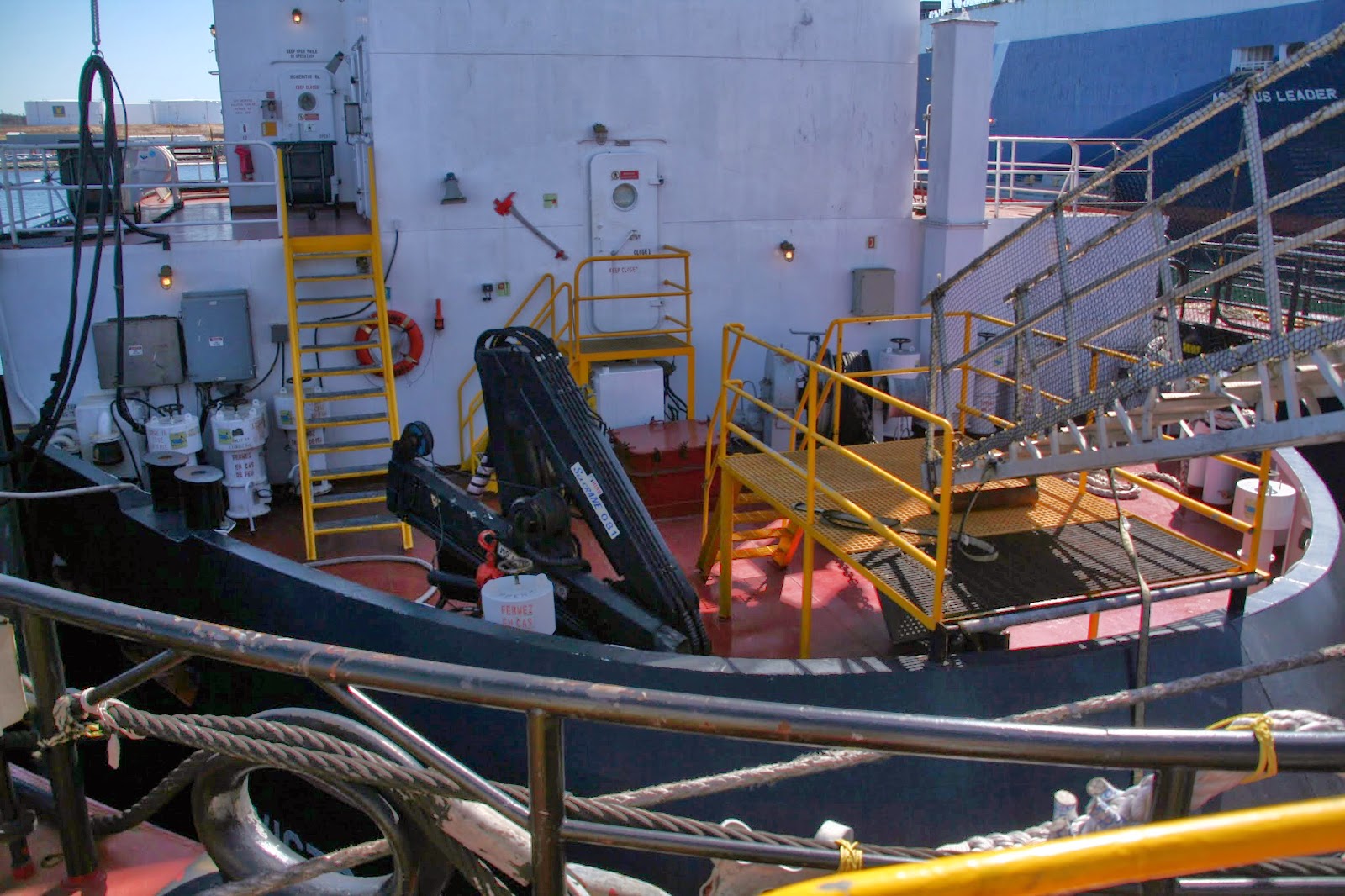 (below)The Bow of the tug from the bridge. the gang plank allows the crew to walk between the tug and barge. 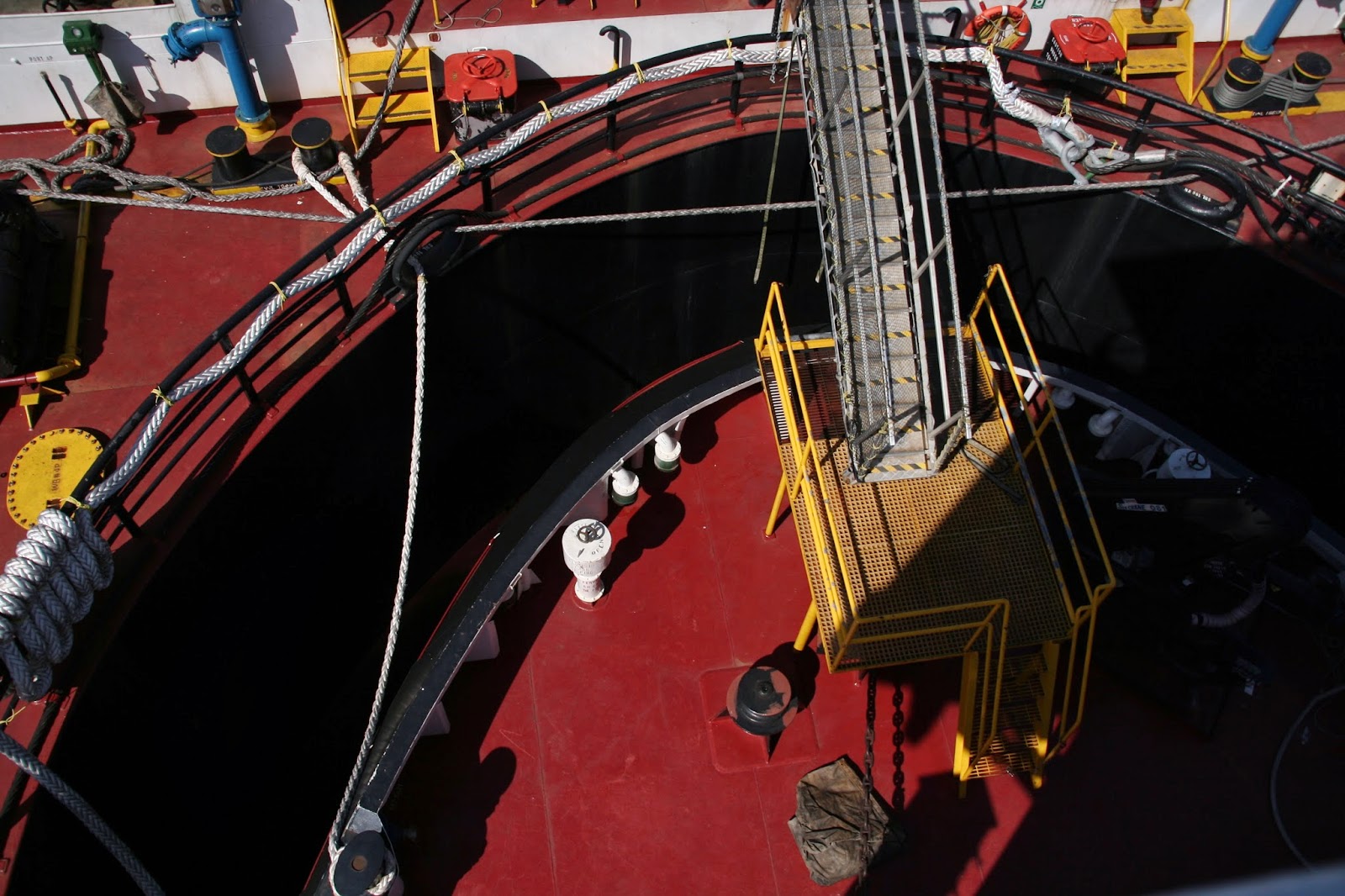 (Below) Bolt down hatch removed opening to the Void space leading to the ballast tanks. 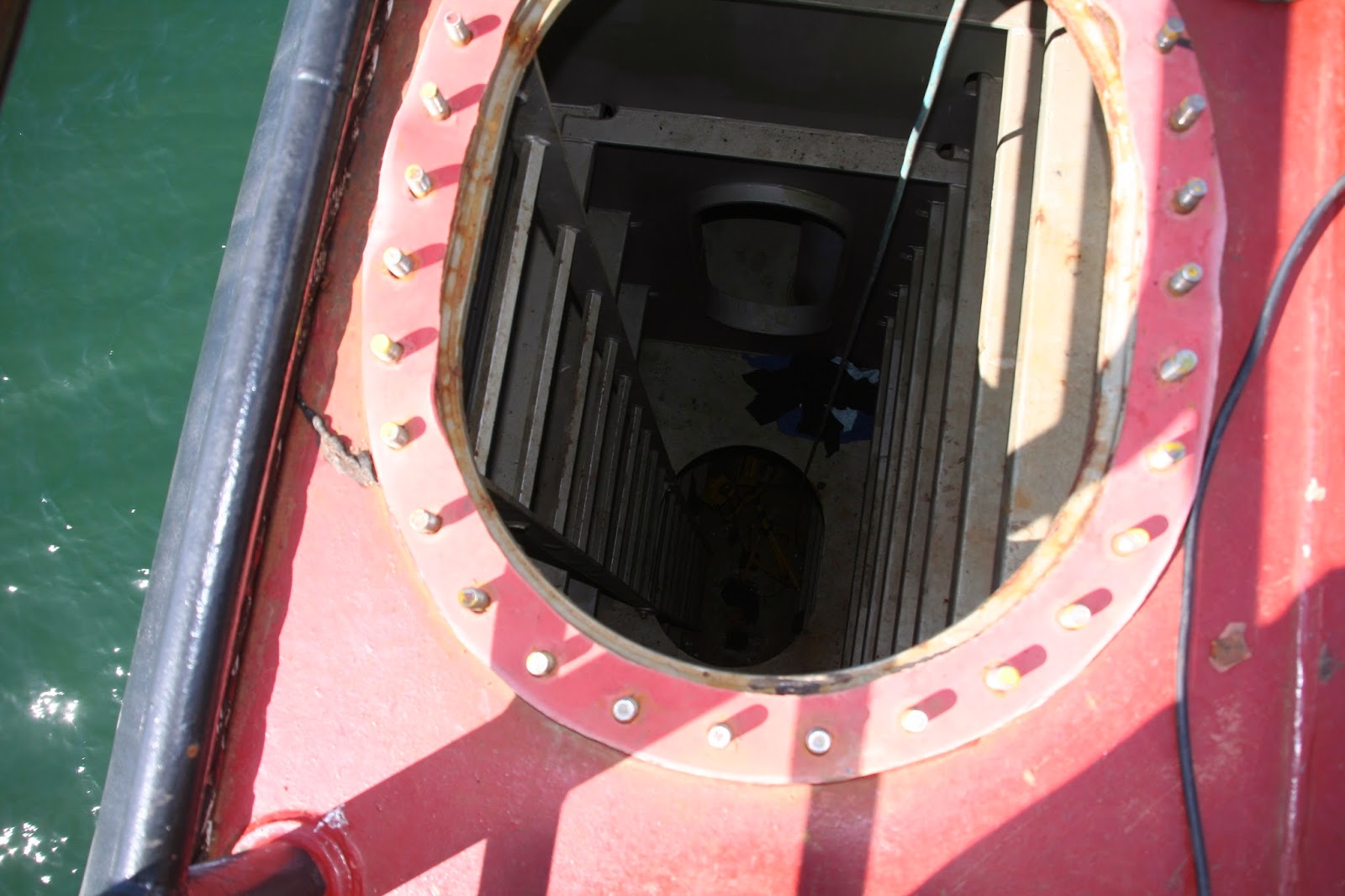 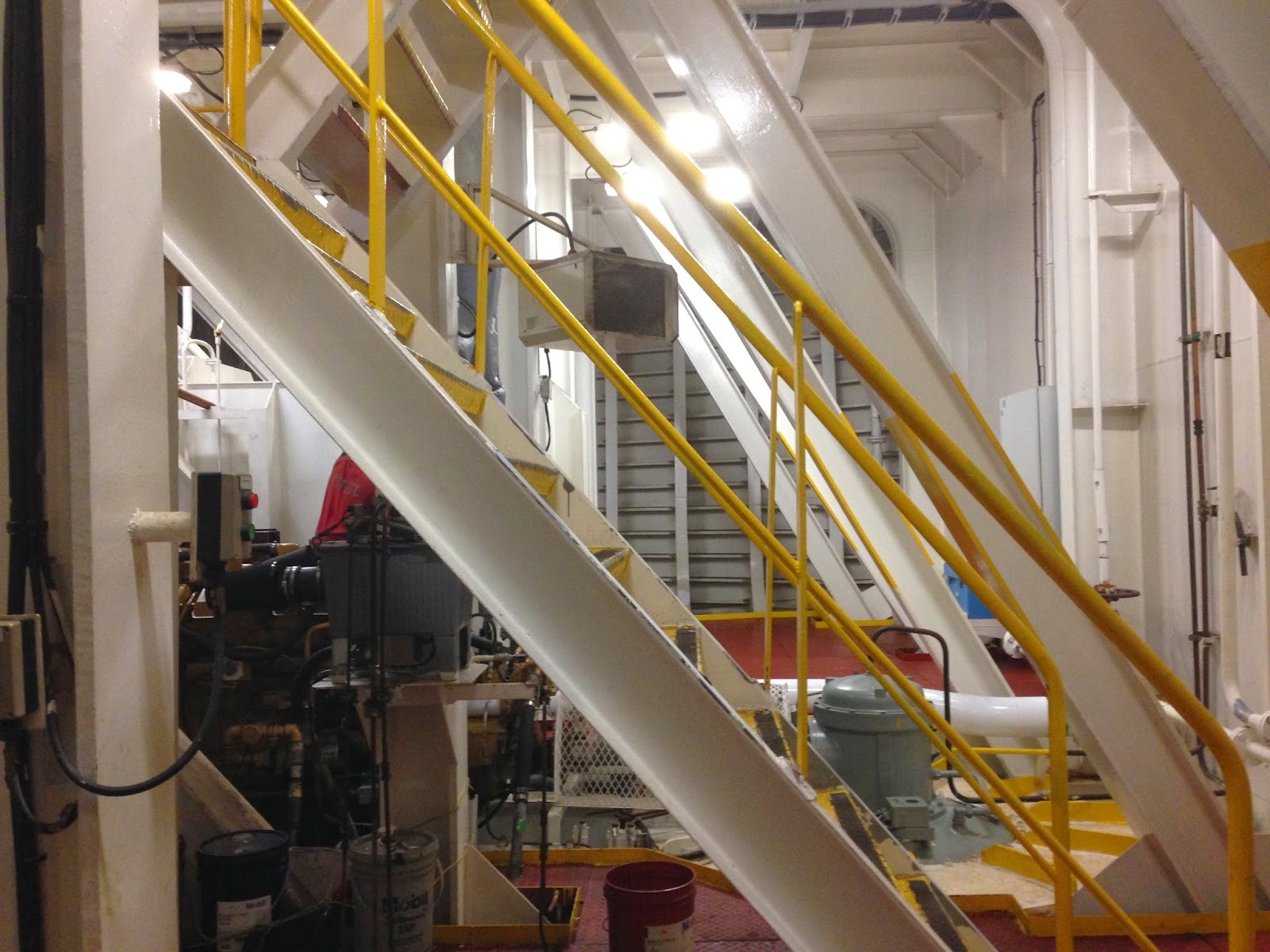 (Above and Bellow) the Bow thruster compartment in the bow of the barge 4 decks down. the thruster uses a Jet of water unlike other vessels with a sideways mounted propellor. 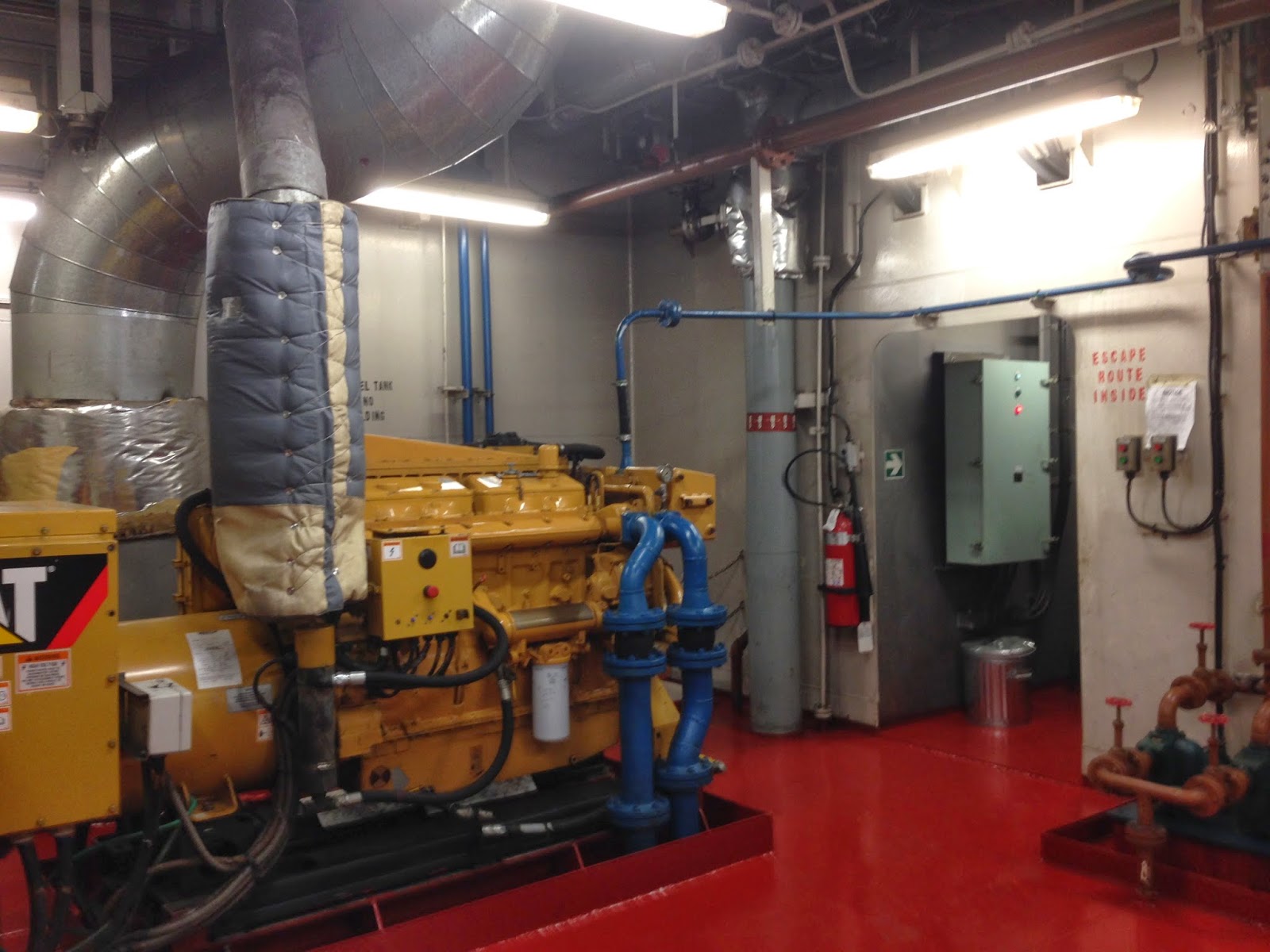 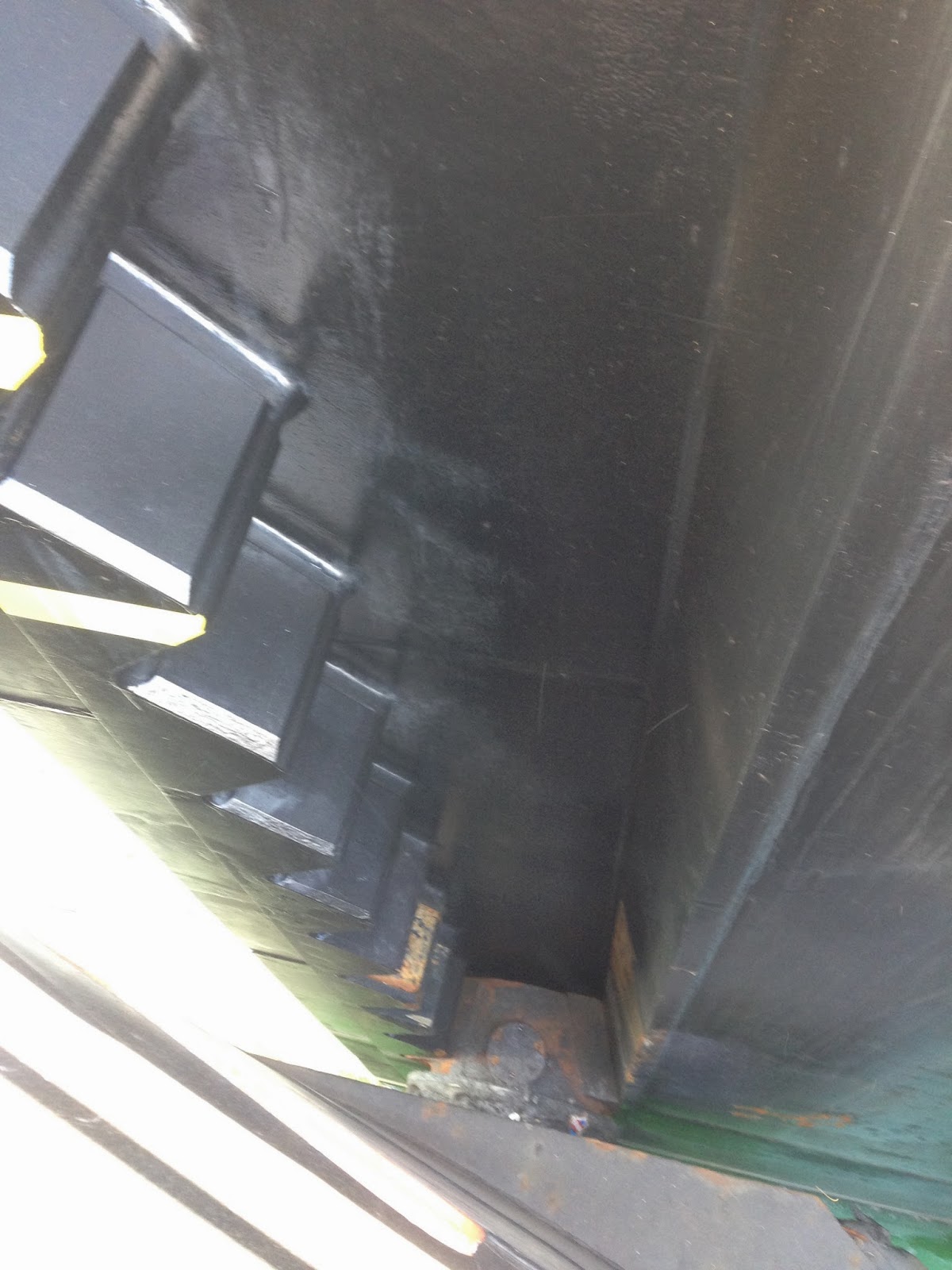 (Above) the pin in the notch on the outside. note the various levels based on the draft of the barge. (Below) the machinery that retracts the pin the pin is housed in the cylinder when retracted. 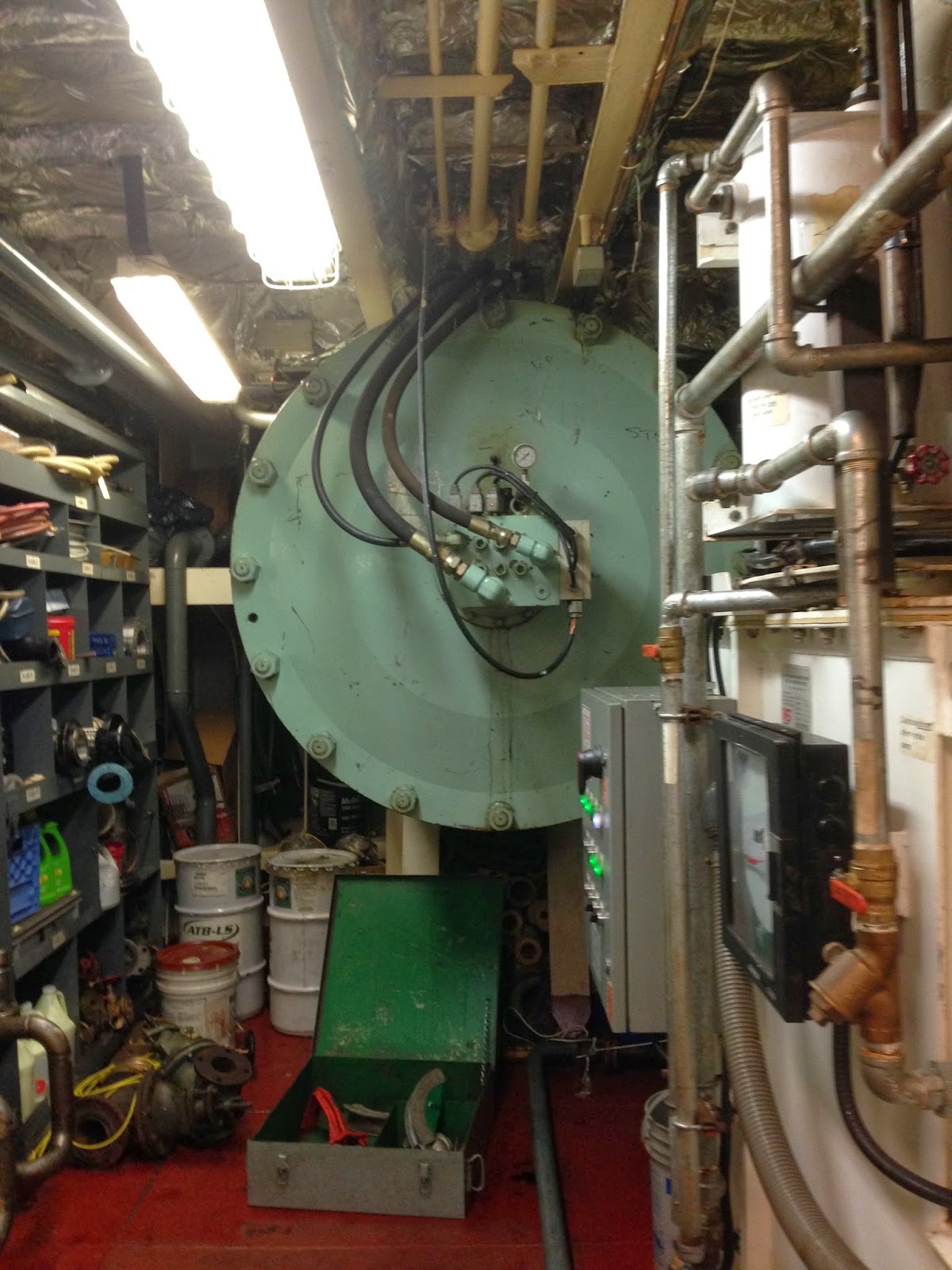 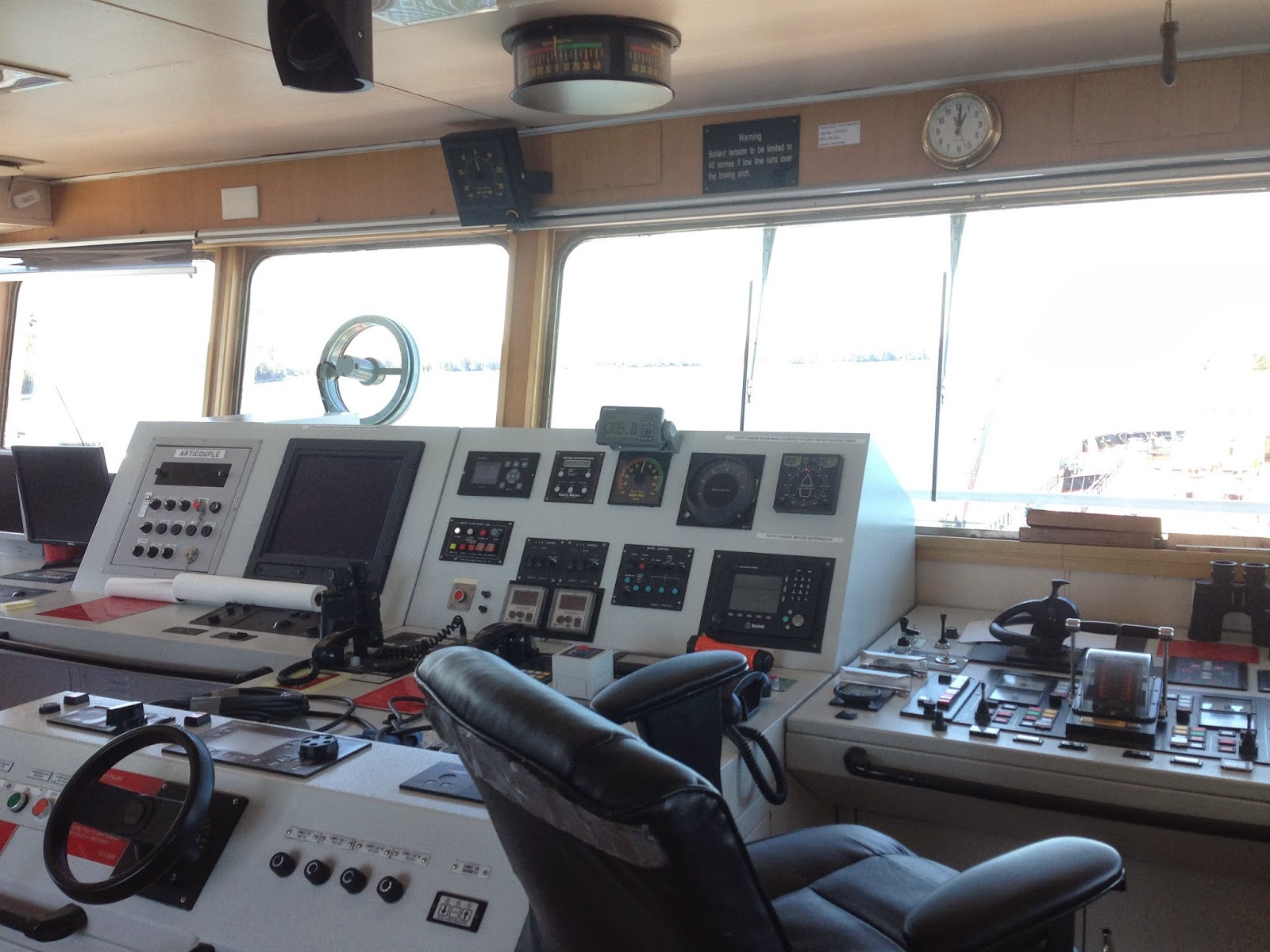 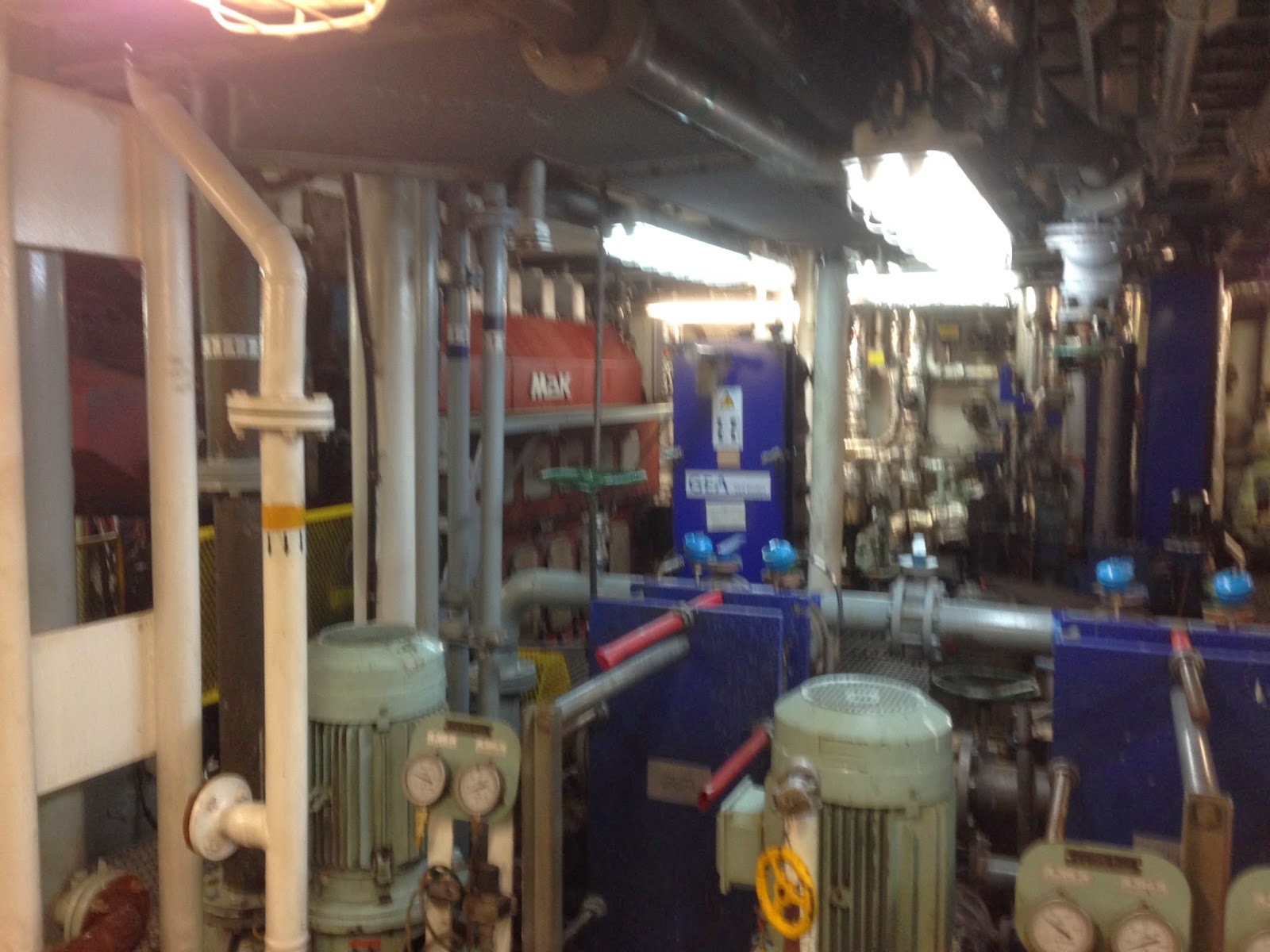 (Above) Inside the engine room. note the Red MAK engine on the left (there is also one on the right)
(Below) Rudder compartment. note the linkage to the port rudder, there is another to starboard not shown. 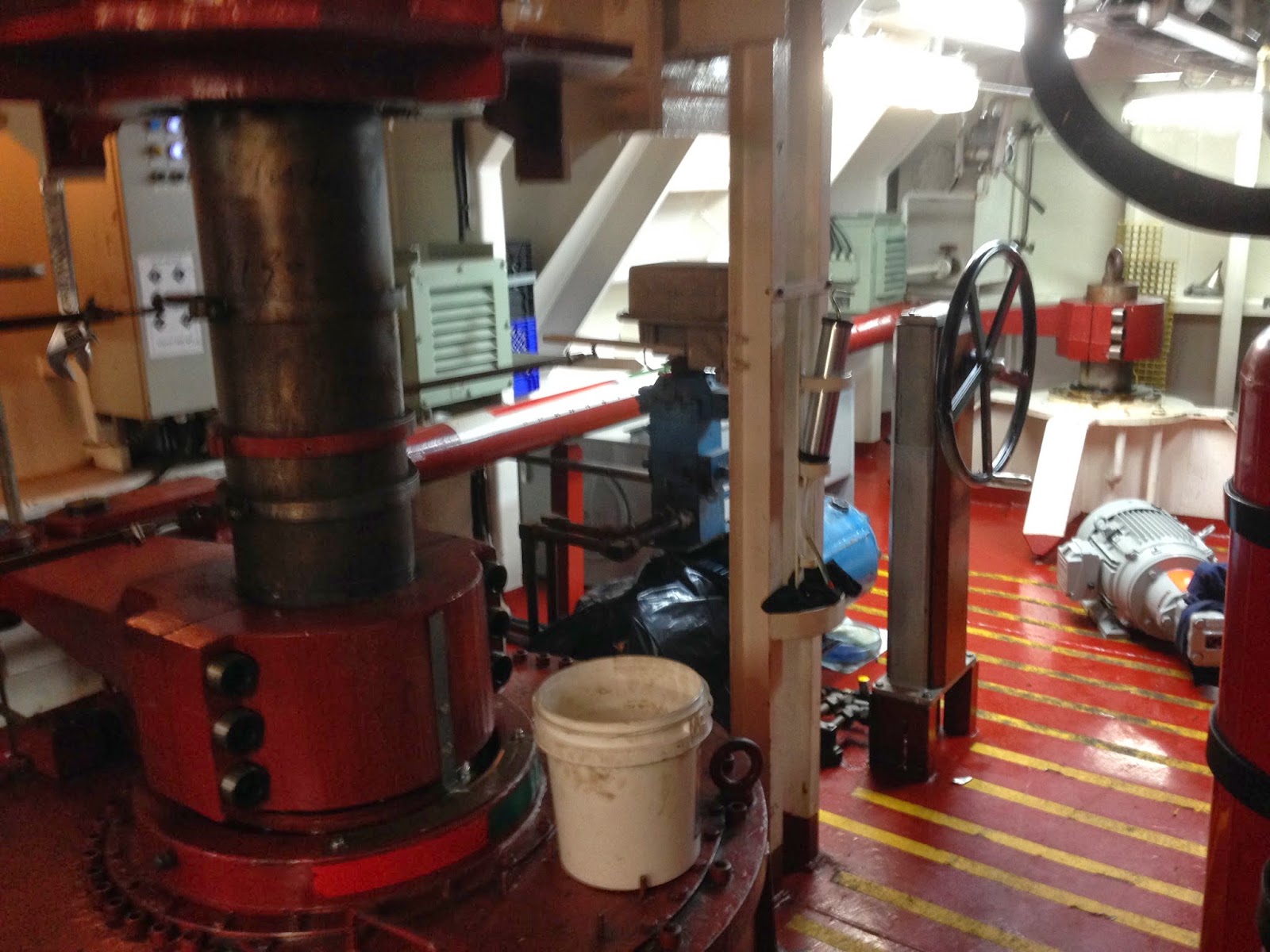 The remainder of the tug Contains a Large galley and mess, as well as Sleeping Quarters for the crew. 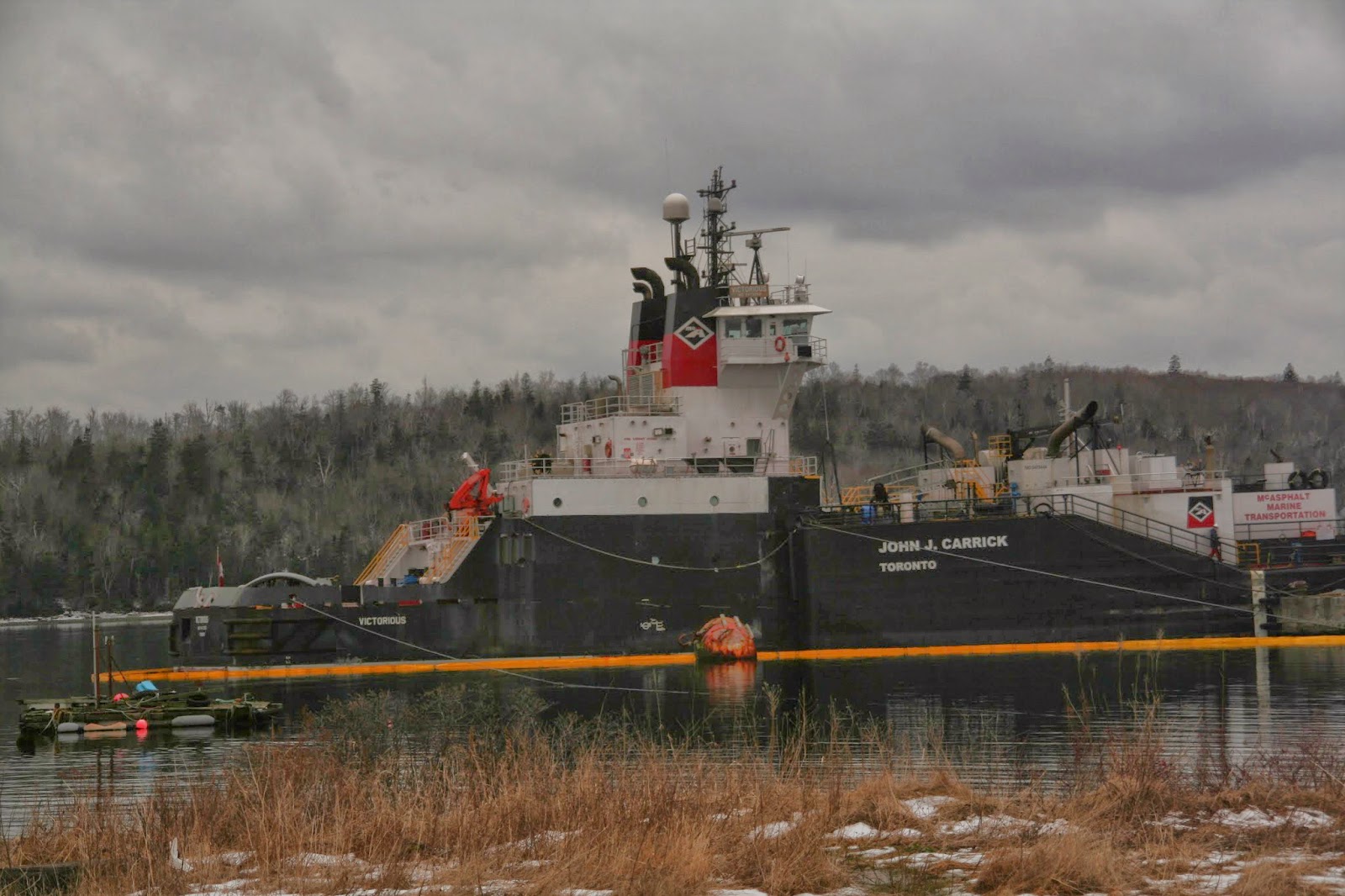 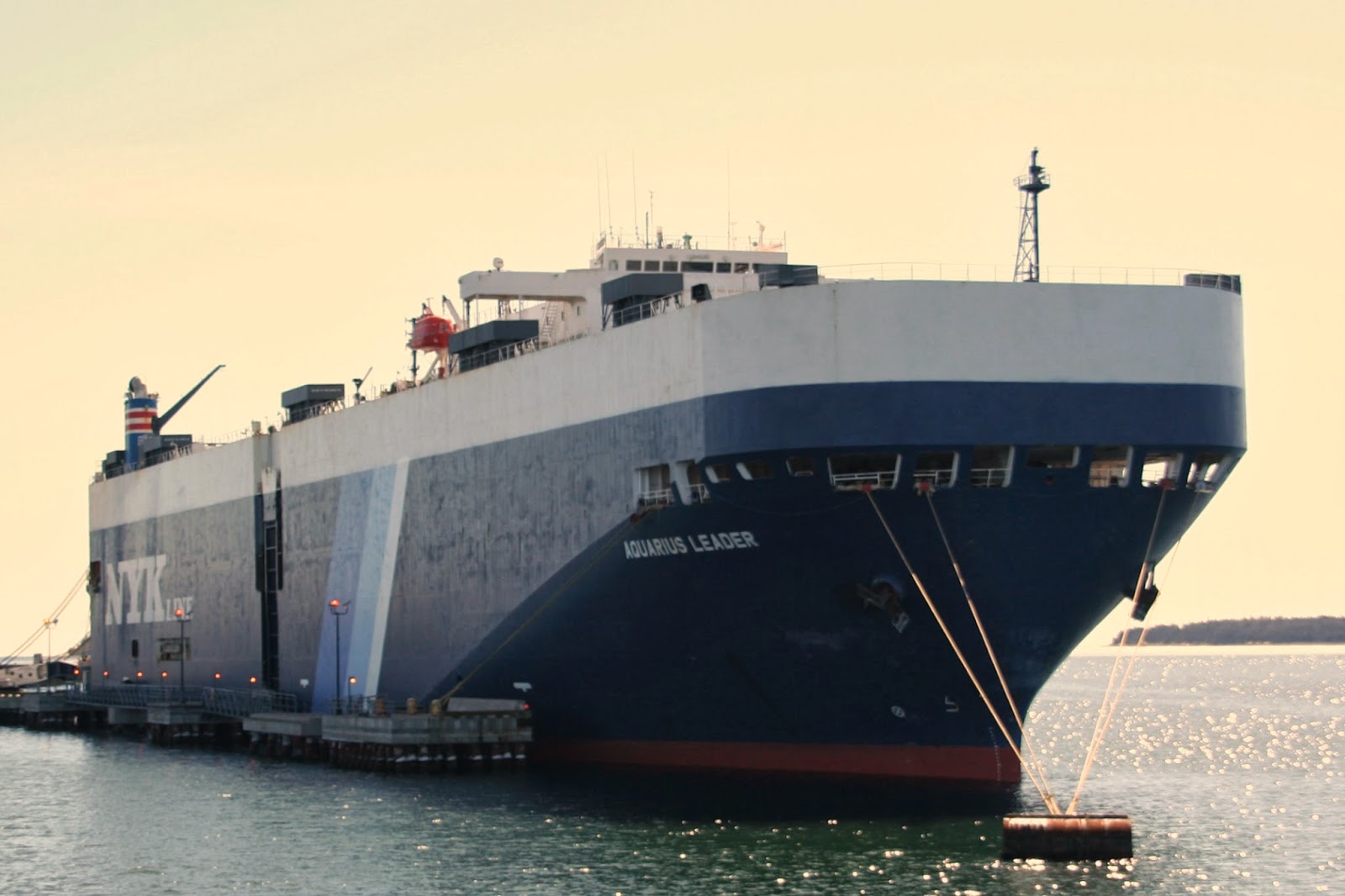 The NYK line PCTC Aquarious Leader tied up at Autoport. She is a regular caller to autoport, as part of NYK RORO’s USCX service. She was built in 2008 and can carry 5980 cars.

The observant of you may notice a more head on angle then normal. The Tug Victorious and barge John J. Carrick are docked at the McAsphalt Dock, just forward of Autoport. Stay tuned for a post on that.