This week in the Herald I talk about NeoLine, the French firm that is proposing a new transatlantic service by sail powered RO-RO vessel. The Firm has a shipping commitment from Michelin, which would see this service call in Halifax starting in 2023.

Not to be out done, Wallenius Wilhelmsen plans a sail powered PCTC in 2025. The Orcelle Wind will carry 7000 cars at 11 knots under sail.

Cargo under sail happened in Halifax in 2019 in a very traditional manner with the arrival of the Cargo Schooner Avontuur with a load of coffee bound for Just Us.

Oceanex Sanderling Makes the move to Autoport after unloading at Pier 41. After loading her cars, she will move back to 41 for Trailers and Containers.

The RORO cargo ship TransPine took to the anchorage in the basin over the weekend. She is reportedly working out fuel issues, and underwent a tank cleaning at pier 27.

From this angle, the Side Elevator doors are quite visible. 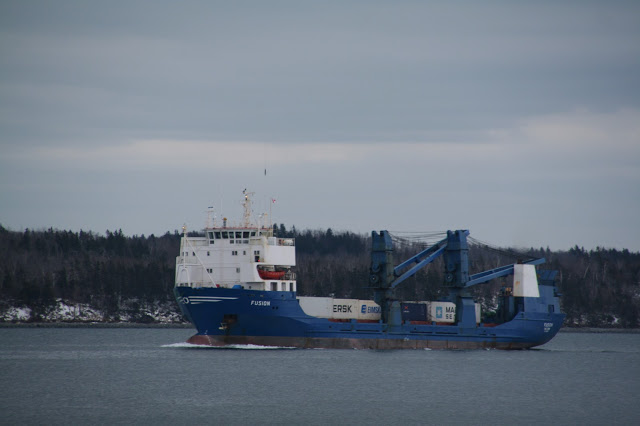 Fusion runs a regular service from Halifax to the French islands of St Peirre and Miquelon. She Previously traded on the route under the name Fort Ross, And was renamed when she was replaced by Dutch Runner, a nearly identical vessel with different owners when the contract changed hands. She returned to service when the contract came back. The Nills B also filled in when Fusion was undergoing maintinance.

The Vessel is Very flexable, Having holds,Cranes, Container Mounts, and a ramp allowing RORO cargos.